NOTE: This Alert was written with major contributions from Tim Turner, Beavercreek, OH, in both content and imagery.

I posted an Alert over the weekend about robber flies (family Asilidae) [see "Robber Flies: Their Name Says it All"]. This family of highly proficient predatory flies includes the so-called "giant robber flies" (genusPromachus).

I had the mistaken belief that the most common member of the giant robber fly genus found in Ohio isP. rufipes(Fabricius), the so-called Red-Footed Cannibalfly. However, thanks to BYGL-reader Tim Turner, I learned that we have another giant in our midst that we must consider when snapping pictures for BYGL Alerts.

When I first met Tim, he was an ISA Certified Arborist and participated in my BYGLive Diagnostic Walk-Abouts. He's now applying his university degree to work as an engineer in sensor evaluation and optical physics. What I never knew is that he is an avid robber fly enthusiast and frequently provides identifications for the online insect ID site "Bugguide" [https://bugguide.net/node/view/15740]. 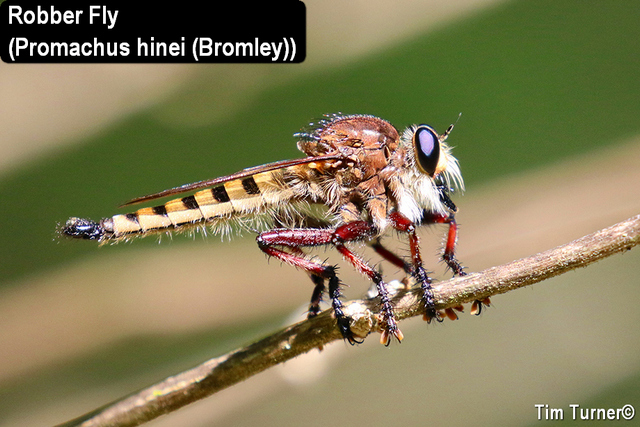 Of course, making an accurate insect identification based on photographs is fraught with risks because many important morphological features such as wing venation may not be discernable in an image. However, early classification descriptions of these robber flies include enough information about other features to convince me that Tim is right.

Neither of us can work out exactly whyP. rufipes(Fabricius) is called the "red-footed cannibalfly" when it has black femurs, yellow tibias, and black tarsi; there's no red anywhere that could be called "feet." Equally perplexing: why did Fabricius userufipesfor the specific epithet which is Latin for "red foot?" P. hinei (Bromley) clearly has red legs (femurs and tibias). So, why is this robber fly not called the "red-footed cannibalfly?" 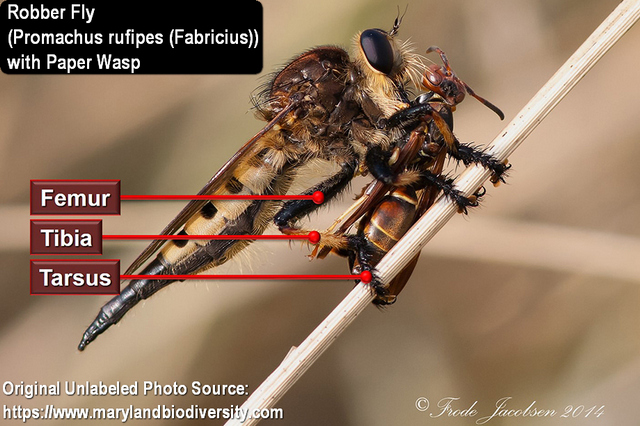 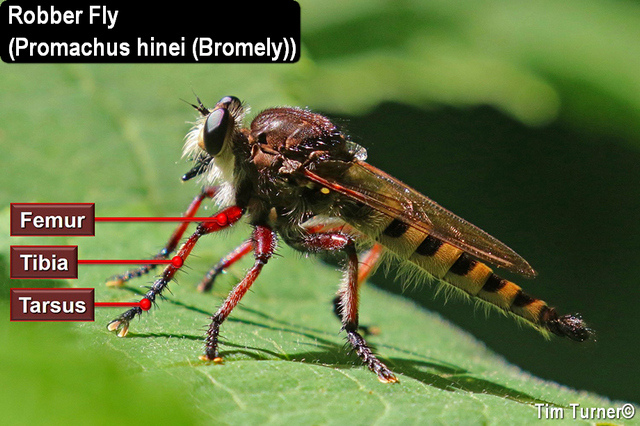 We have a theory; however, it requires a trip down a rabbit hole. Readers of this Alert have an option. You can stop right now and enjoy the rest of your day doing something constructive or you can follow me down the rabbit hole and lose valuable time in your life that you'll never get back.

Down the Rabbit Hole

James Stewart Hine was a professor in the Ohio State University Department of Zoology and Entomology as well as the Curator of the Division of Natural History of the Ohio State Archaeological and Historical Museum. In 1911, he published a paper in the Annals of the Entomological Society of America titled, "Robberflies of the Genera Promachus and Proctacanthus."

Here is an excerpt from his description ofP. rufipes. I've bolded some salient points: "Thelegs are somewhat variable, or at least in the specimens before methey show two distinct types of coloration. Thespecimens that agree closer to the original description have pure black femora and reddish yellow tibiaewith black apices.In another set of specimens the femora and tibiae, except the apices, are reddish brown throughoutand do not show any contrast. In other respects the two series of specimens exactly agree andI prefer to consider them all rufipes. Specimens at hand from District of Columbia, Tennessee, Mississippi, Iowa and Ohio."

Stanley Willard Bromley was Chief Entomologist with Bartlett Tree Research Laboratories, Stamford, CT. In 1931, he published a paper in the Annals of the Entomological Society of America titled, "New Asilidae, with a Revised Key to the Genus Stenopogon Lowe: (Diptera)." The new Asilidae was a species that he named,Promachus hinei(Bromley) in honor of James Stewart Hine.

Here is an excerpt from Bromley's description of the new species with some highlights: "Closely related to Promachus rufipes Fabr. from which it may be distinguished by the femora being reddish instead of black, the light pollen of the abdomen grayish or grayish yellow instead of yellow; the thorax deeper reddish brown, and the pale pile of the head thorax and abdomen grayish instead of yellow.This is the species referred to by Hine, (Annals Ent.Soc.America. Vol. IV, (1911), p.166,)under Promachus rufipes Fabricius." 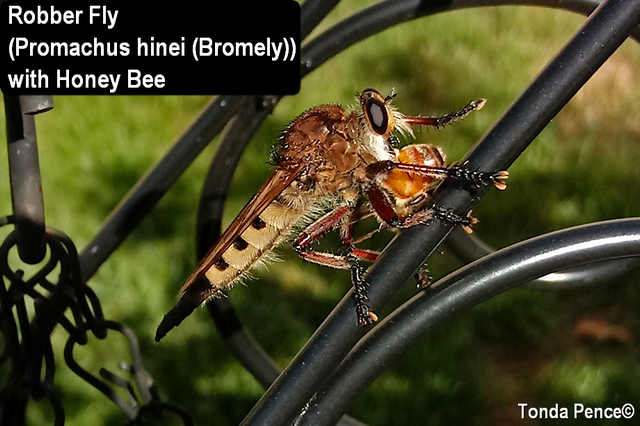 So, when Fabricius describedPromachus rufipesin 1775, perhaps he had specimens with red legs which accounts for his "red foot" specific epithet. It's a reasonable assumption given that Hines believed in 1911 thatP. rufipeshad legs that "show two distinct types of coloration." It wasn't until Bromley separatedPromachus hineifromP. rufipesin 1931 that the importance of red legged specimens was clarified.

The ESA recognized long ago the value of attaching an approved common name to a specific species. Conversely, it can be confusing if the same common name is applied to multiple species or if one species has several common names. There are many grasshoppers found in the Carolinas, but there's only one "Carolina Grasshopper" that represents the speciesDissosteira carolina(Linnaeus) according to the ESA's Common Names of Insects Database [https://www.entsoc.org/common-names].

The ESA does not assign a common name to a species based on someone simply declaring it to be the name. There is an eleven-step process which goes far beyond even recognizing common usage although that's taken into consideration.

One step requires multiple references "indicating clearly that the proposed common name is already established and ideally widespread in use." Of course, this same step also allows for establishing a newly coined common name.

I did a cursory and no doubt wildly incomplete Google search looking for the first use of "red-legged cannibalfly" forP. rufipes(Fabricius). The common name did not appear until after 2000; however, there's no information on who coined the common name or why. Prior to that, the species was referred to as the "Bee-Panther" by Bromley in several of his papers published in the early 1930s. He noted this common name was used in a number of southern states in recognition of the fly's propensity to attack honey bees.

Still, there are multiple uses of the "red-footed" common name although its origins are unclear. Did someone apply a literal translation to therufipesspecific epithet? Were they aware thatP. rufipesdoesn't have red legs? Perhaps they were looking atP. hineiand thought it wasP. rufipeslike I did. And, where did "cannibalfly" come from? Maybe they do eat each other; however, I've never read a description of that behavior in the literature.

The bottom line is I was wrong with the identification of the species which I have corrected with this posting. However, I'm not sure what to do with the common namered-footed cannibalflybecause I don't want to perpetuate the confusion. It's not an official common name and is far more descriptive ofP. hinei. Perhaps I'll take another look at the ESA's eleven-step common name process.

By the way, based on Bromley's series of papers on robber flies in Ohio, it appears that the red-footed cannibalfly (P. hinei(Bromley)) may be more common in Ohio compared to the bee panther (P. rufipes(Fabricius)). See what I did there?