The familiar "bzzzzzzz...thud!" sound made by May/June Beetles as they fly around porch lights at night and bounce off walls, doors, windows, startled homeowners, etc., is now being heard in southwest Ohio.  Indeed, my good friend and hort capades partner, Ron Wilson (Natorp's Nursery Outlet & Landscape), alerted me that the buzz-bombing night-flyers have found his home in Mason, OH, with the beetles smacking into his porch light and hitting his screen doors en masse. 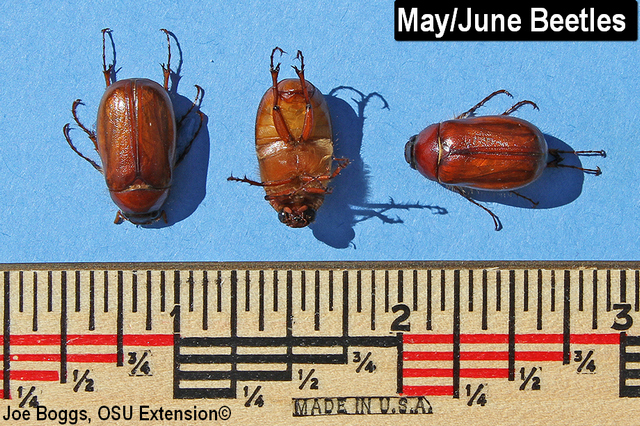 The night-flying behavior of May/June beetles allows them to dodge day-flying predators.  The beetles hanging out on my front porch after a night of debauchery don't last long thanks to a colony of house sparrows (Passer domesticus) looking for insect treats to feed their young. 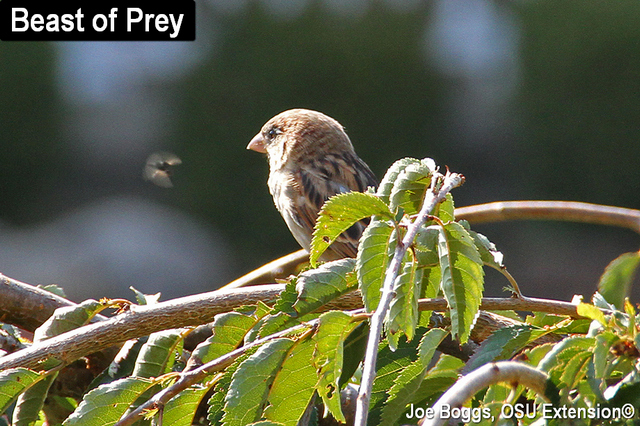 There are five species of beetles in Ohio belonging to the genus Phyllophaga (family Scarabaeidae) that share the general common name of May or June Beetles.  The 1/2 - 1" long adults are slightly oblong, and reddish-brown to black in color. 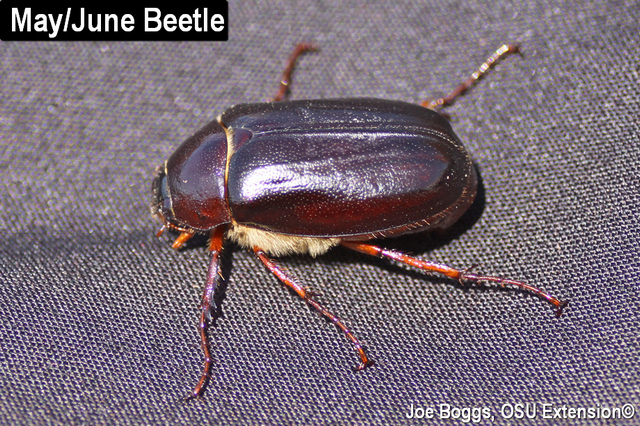 Some species may be mistaken for later-emerging chafers.  However, there are two important differences.  First, it's the wrong time of the year for chafers; adults don't appear until late-June to early-July.  Second, the underside of the thoraxes of May/June beetles are typically covered in fine hairs making them look like they have "hairy chests." 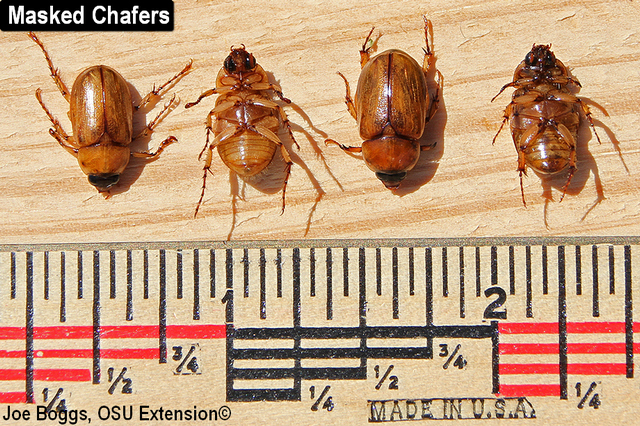 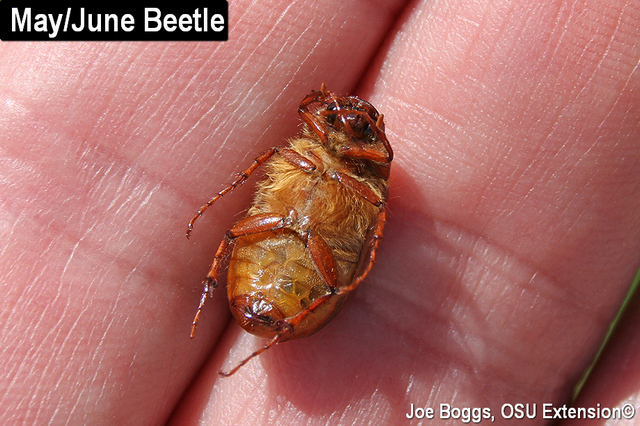 The obnoxious evening behavior of May/June beetles often causes them to be dismissed as nuisance pests.  In most cases, this is true.  Although adults of most of these species feed at night on flowers, or on tree and shrub foliage, they seldom cause significant damage.

However, large numbers of these beetles occasionally produce noticeable leaf damage, and their nocturnal life-style makes them a deceptive defoliator.  In 2000 and again in 2011, conspicuous defoliation of oaks and maples caused by these beetles was reported in Ohio and Kentucky.  The defoliation involved the removal of all of the leaf tissue with the exception of the main veins.

Since the beetles are night feeders, casual observers were left in the dark trying to explain the damage.  Although damage may appear severe, the beetles only fly for a few weeks, leaving plenty of time for defoliated trees to produce new leaves.

The larvae of these scarab beetles are called white grubs.  The grubs of some species may be found feeding on decaying organic matter such as in compost piles.  However, the grubs of other species have feeding habits similar to Japanese beetles (Popillia japonica) and Masked Chafers (Cyclocephala spp.).  The big difference is that May/June beetle grubs prefer pasture grasses.  Thus, damage to trees most often occurs near pastures.

Likewise, significant May/June beetle grub populations are seldom found beneath older lawns, but are sometimes observed where new homes occupy ground which was recently in pasture.  Larvae require anywhere from 1 to 5 years to complete their development, depending upon the species.