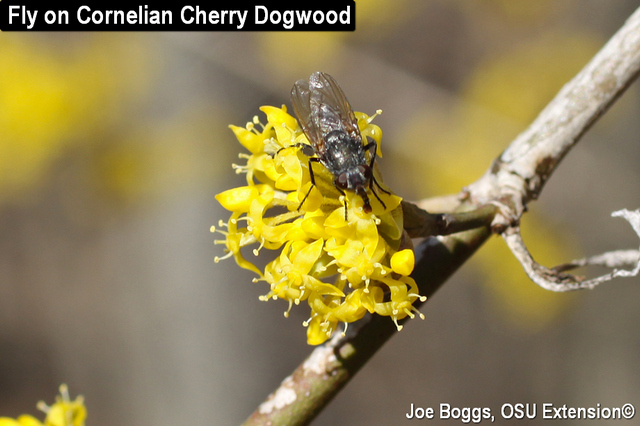 My perspective changed when I started paying attention to how often I had to shoo flies away that were photobombing shots I was taking of bees visiting flowers.  One of the most frequent flyers were the common green bottle fly (Lucilia sericata); the same flies you see in my magnolia photographs. 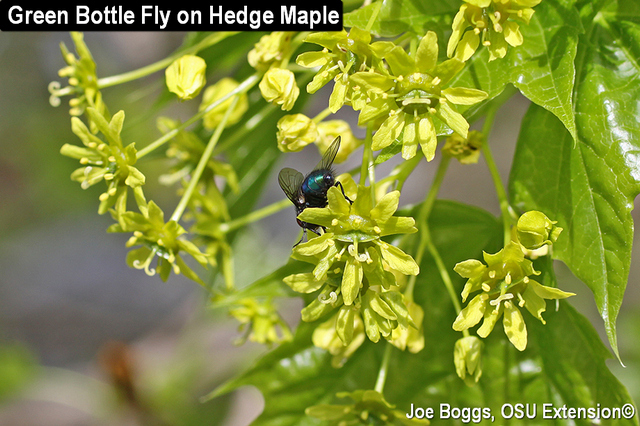 Then I started looking into the scientific literature (see More Information below).  The authors of a paper published in 2001 in the journal Canadian Entomologist claimed that Diptera are the second most important order of flower-visiting and flower-pollinating insects worldwide.

A review published in the Journal of Pollination Ecology in 2015 noted, "Diptera exhibit many of the same foraging behaviours as other flower visitors and they are effective pollinators in both natural and agricultural ecosystems."  Green bottle flies were the focus of a paper published in 2015 highlighting their frequent visits to Oxeye daisy, Leucanthemum vulgare.

In other words, flies are very important plant pollinators which is why Hendrix belted out in a purple haze, 'Scuse me while I kiss this fly!  Ok, that wasn't true, but it sounded like it.

So, why have flies been largely ignored as pollinators until relatively recently?  Because they're flies.  And, bees have enjoyed a better marketing campaign.

Consider the frequently used quote:   1 of every 3 bites of food depends on bees.  I've used this quote but never asked if it's really true.  In fact, the source for this quote was a 2007 study published in the Proceedings of the Royal Society.  The study noted that pollinators such as bees, birds, and bats affect 35 percent of the world's crop production.  What happened to the "birds and bats" in the 1 of every 3 quote?  Bees have better publicists.

Obviously, the bee quote does sound more appetizing than 1 of every 3 bites of food depends on flies.  And there lies the problem:  perception.

Our perception of flies as repulsive things is Biblical:  If you do not let my people go, I will send swarms of flies on you and your officials, on your people and into your houses. The houses of the Egyptians will be full of flies, and even the ground where they are. Exodus 8:21

Consider the idiom "dropping like flies."  Or, the Moroccan saying: Better a handful of bees than a basket full of flies.  Or, the Egyptian saying:  A fly is nothing; yet it creates loathsomeness.  One of my favorites that apparently originated in China:  Do not use a hatchet to remove a fly from your friend’s forehead.  Sounds like the makings of a courtroom defense strategy. 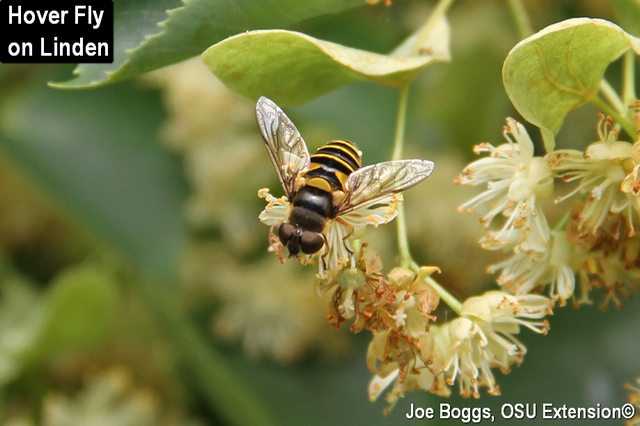 Of course, some flies are clearly honored as plant pollinators.  Flies belonging to the family Syrphidae are commonly called "hover flies" for their hovering flight behavior.  Another common name for the family is "flower flies" for their visitation to flowers.  These flies provide a twofer because their larvae are predators that commonly feed on aphids.  There's not much of a secondary benefit to bottle flies, or blow flies, unless you want to get rid of a dead skunk. 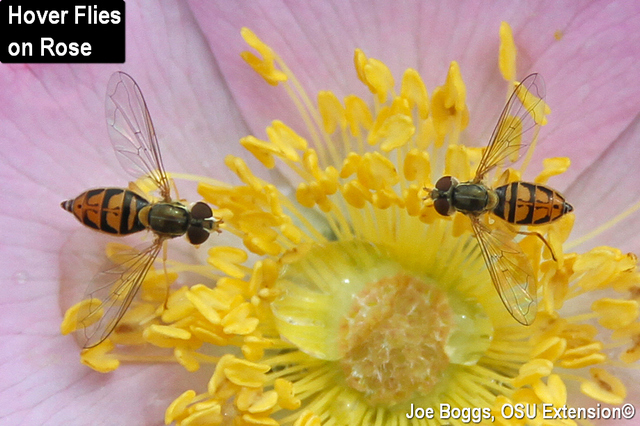 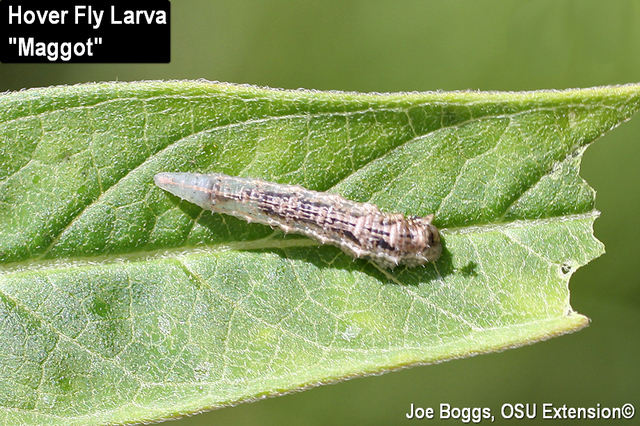 Too Much of a Good Thing

One of the e-mails I received led me to visit a panicle hydrangea (Hydrangea paniculata) that was literally buzzing with blow flies.  The fly attraction seemed cultivar-specific with other nearby hydrangeas of the same species unaffected. 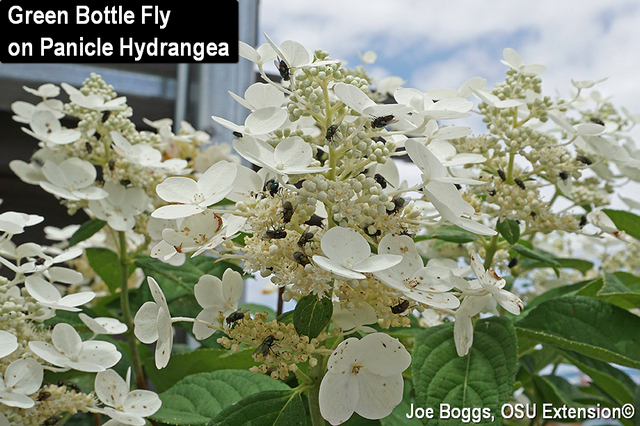 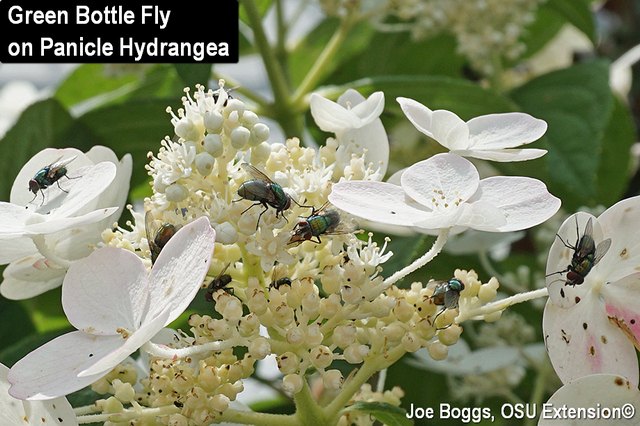 There is a common misconception that plants that rely on flies for pollination produce flowers that stink.  While this is certainly true in some cases, it's not true in most cases.  The hydrangea flowers had only a slight floral scent.  I've also taken pictures of blow flies on linden flowers as well as mountain mint. 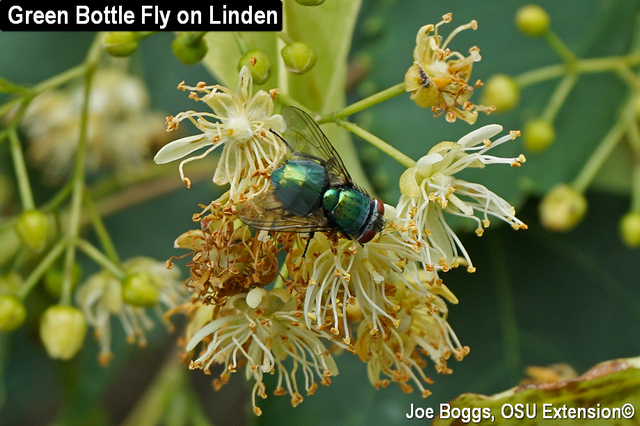 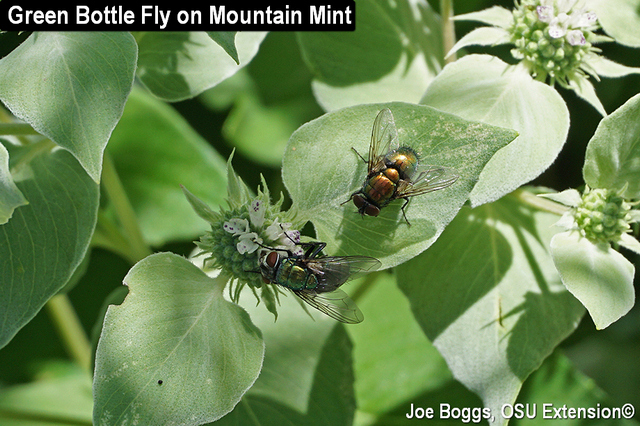 Manhattan euonymus (Euonymus kiautschovicus 'Manhattan') is probably one of the most notorious plants for attracting flies to its flowers; I've heard it called "fly shrub."  One of the best responses to flies being a problem with certain flowing plants was penned in 2001 by Dora Galitzki, author of "The Gardener's Essential Companion," when she was the author of the New York Times "Gardener's Q&A."  Here is her column title, the question, and her answer in their entirety:

Q. I have a set of three Euonymus Manhattan shrubs, just like the ones I see in Central Park, and they have grown fairly tall, about five feet. They get a lot of sun and have a lot of flowers in late summer.  For about three or four weeks, hundreds of flies swarm the shrubs, landing on the flowers. (There are also some bees, but mostly flies.) I would like to plant more euonymus, in shadier spots, and so would my neighbors. I have tried to research the shrub but found nothing about flies. I can't believe this happens all over Central Park.

A. The flies are there at the request of the euonymus, which views them not as pests but as pollinators, and there isn't much you can or should do about it. Many plants, including favorites like hollies, hawthorns and willows, attract flies rather than bees, moths or other insects. Most flowering plants have more than one pollinator, just in case. One type may get preferential treatment -- bees, for example, may be lured with bright colors and sweet aromas -- but being pollinated is more important to the plant than how it is done.

In general, and there are lots of exceptions to the rule, flies are major pollinators if the flowers are white, pale yellow or greenish; if they are more wide open than tubular; and if their aroma is more musky than sweet.  With everything else that happens in Central Park, who would notice a few extra flies?