Small white masses appearing in late summer on redbud (Cercis canadensis) stems have become a common occurrence in recent years.  We showed participants in the 83rd Ohio Plant Diagnostic Workshop this past Friday an example collected in northeast Ohio and I found several today on a redbud not far from my home in the southwest part of the state.  The masses look like a soft scale, mealybug, or perhaps an insect egg mass.  In fact, they are the sticky, frothy "egg plugs" of a treehopper (family Membracidae) and they may also be found on black walnut (Juglans nigra), wafer ash (Ptelea trifoliata), and Viburnum spp. 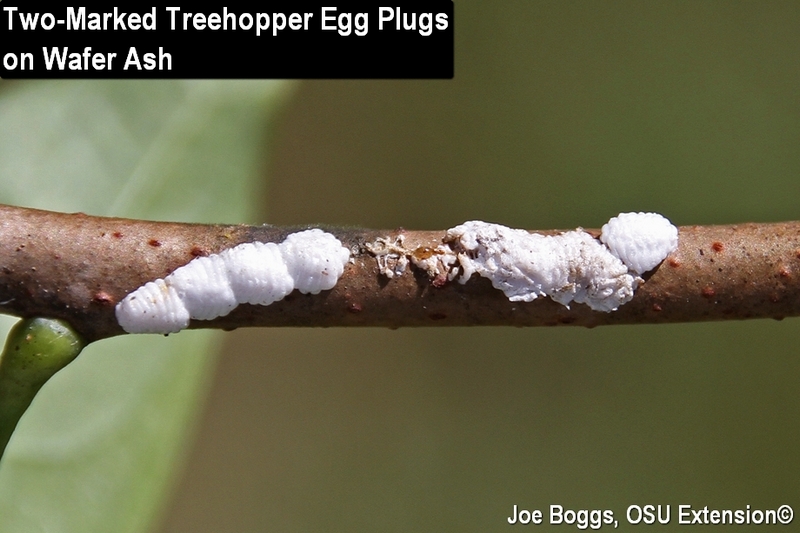 The exact treehopper in question depends on the host.  Originally, the culprit was referred to as the Two-Marked Treehopper and this treehopper continues to retain the scientific name, Enchenopa binotata.  However, it was recently discovered that there are actually several yet-to-be-named species of treehoppers involved with each species confined to a specific host plant.  The two-marked treehopper found on redbud does not occur on the other hosts. The treehopper on wafer ash only occurs on wafer ash; the one on walnut is specific to walnut and so on. 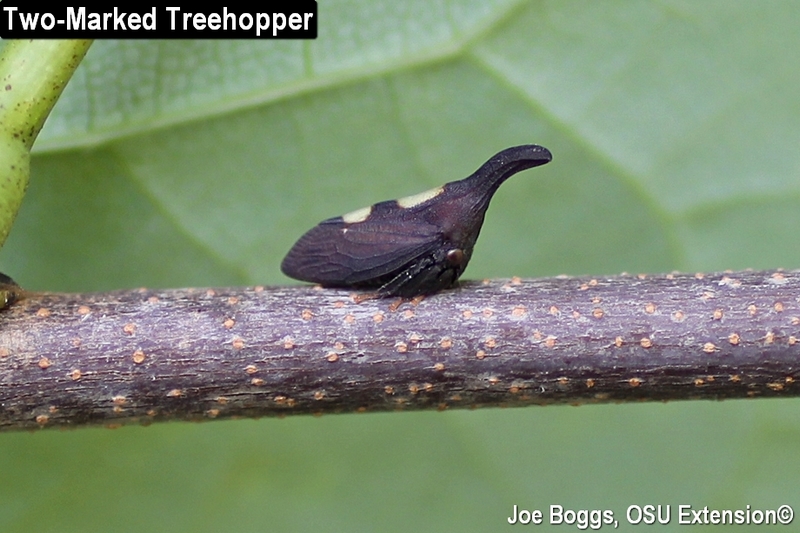 Regardless of the host, all of the treehoppers look the same.  They also have the same life cycles and practice the same egg-laying behavior.  This group of treehoppers is now referred to as the "two-marked treehopper species complex," or the "Enchenopa binotatacomplex," or simply the "Enchenopa complex."  It is believed that they were all once a single interbreeding species existing over the same geographical area that have gradually evolved into new species.  In biological circles, these are called "sympatric species."

Researchers have found that the treehopper's host plants were the driving force behind the speciation.  The mechanism responsible for the divergence sounds simple because it's simply sound.  Male treehoppers entice females by vibrating on plant stems to create a "come hither" sound that resonates through the stems.  However, differences in the way sound is transmitted through the different host plant stems affects the sound frequencies traveling through the stems.  For example, a male treehopper vibrating on a redbud transmits a different sound compared to a male on a walnut.  Eventually, females that would respond to the sound produced on redbud would not respond to the sound produced on walnut and vice-versa.  Thus, the treehopper's host plants are responsible for the splits in species. 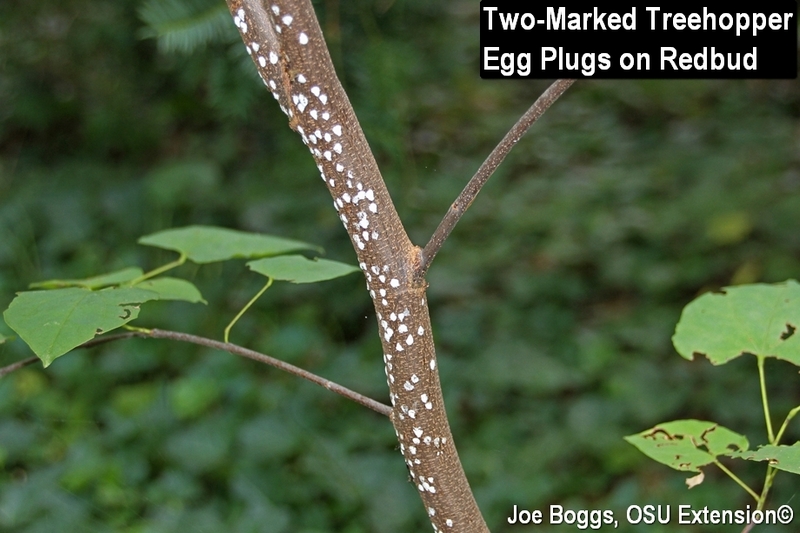 All members of the Enchenopa complex have one generation per season in Ohio.  Eggs are laid in late summer with females using their saw-like ovipositors to cut slits in the bark of their host trees.  After they insert their eggs, they cover the bark wound with a white, sticky substance that serves to protect the eggs.  These "egg plugs" also contain a chemical attractant that draws other females to lay their eggs in close proximity to one another.  The resulting collection of raised, circular to slightly elongated white material on plant stems may be easily mistaken for soft scale insects or mealybugs.  The oviposition behavior appears to cause no appreciable harm to the tree hosts; stem dieback has not been observed with this insect.  Although both the adults and nymphs suck juices from leaf veins and petioles, their feeding damage is also considered inconsequential even when high populations occur.  So, control of these treehoppers is not generally required.