I came across a beautiful little native fly this week while taking pictures of pollinators on common goldenrod (Solidago canadensis).  The fly, Trichopoda pennipes, doesn't have a common name, but some web-based resources refer to it as the "feather-legged fly."  This is not entirely correct.

It is just one type of feather-legged fly with the common name given to all members of the Trichopoda genus.  The name of the genus comes from the Greek tricho meaning "hair;" and poda meaning foot.  In fact, some refer to these flies as "hairy-legged flies."  Even with the naked eye, you can clearly see the hair-like structures on the hind tibia that are responsible for the common and scientific names. 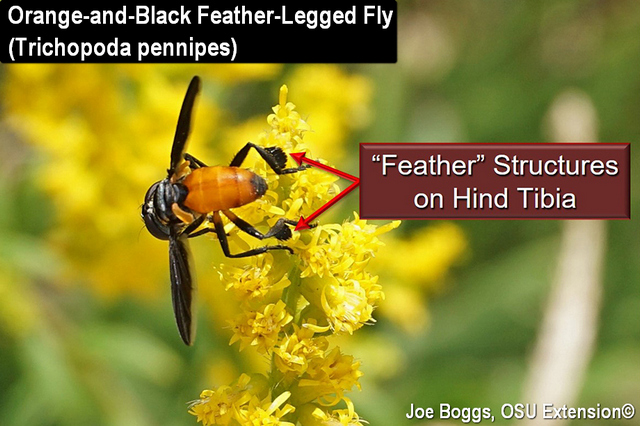 I came across an online resource that referred to Trichopoda pennipes as the orange-and-black feather-legged fly.  Although this common name hasn't been approved by the Entomological Society of America, I like it because it's so descriptive. So, I'll refer to it in short-hand as the O&B fly. 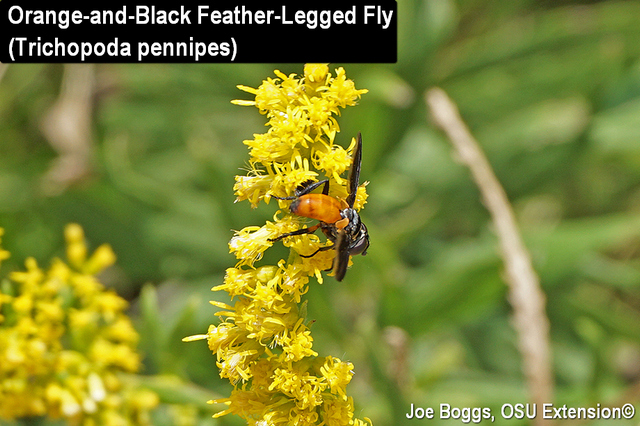 Other fascinating features that are clearly visible on the O&B fly are their two wings which mean it's truly a fly belonging to the order Diptera:  Di = two; ptera = wings.  Flies actually have four wings but the hind wings are modified into two knob-like structures called halteres which are used by flies for balance during flight.  It's one reason flies are such good flyers and are called flies.  The saddlebag-shaped halteres on the O&B fly are relatively large compared to many dipterans and they are covered in orange scales making them easy to see. 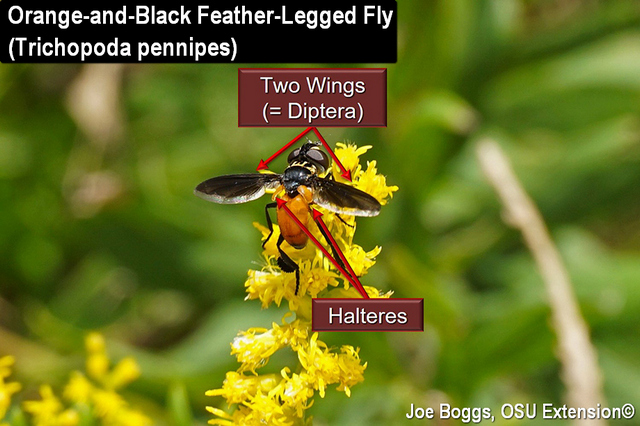 The O&B fly belongs to the fly family Tachinidae (the parasitoid flies) and is found throughout much of North America.  Members of this family are well known for their prowess in tracking their hosts and for their larvae (maggots) ravaging their hosts from the inside out. 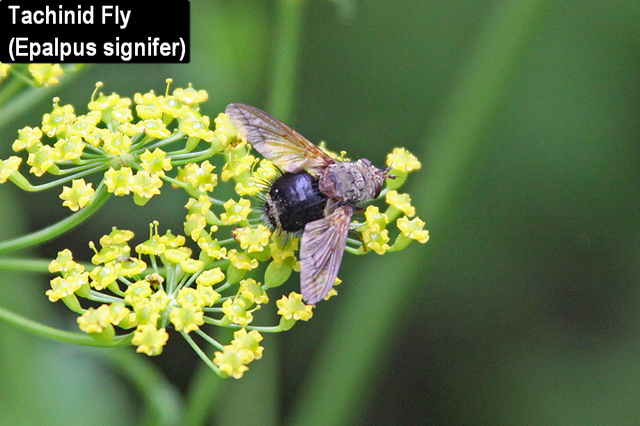 The O&B fly focuses its parasitoid scrutiny on the "true bugs" (order Hemiptera, suborder Heteroptera).  They can pay particular attention to some significant stink bugs (family Pentatomidae) including the southern green stink bug (Nezara viridula) notable for damaging cotton and other field crops and the brown marmorated stink bug (Halyomorpha halys) notable for damaging a number of different crops then invading homes to brag about it.  The fly will also parasitize various leaf-footed bugs (family Coreidae) such as the squash bug (Anasa tristis). 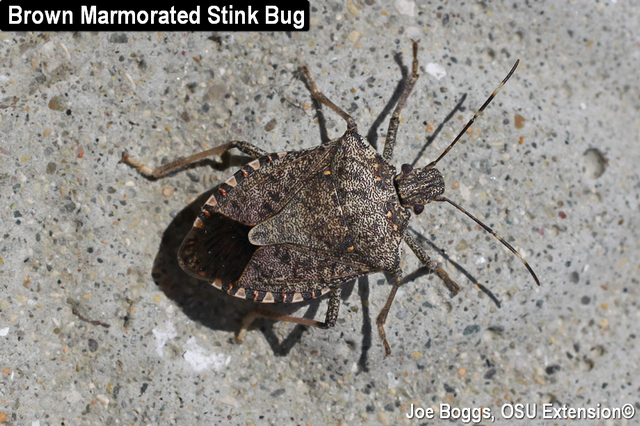 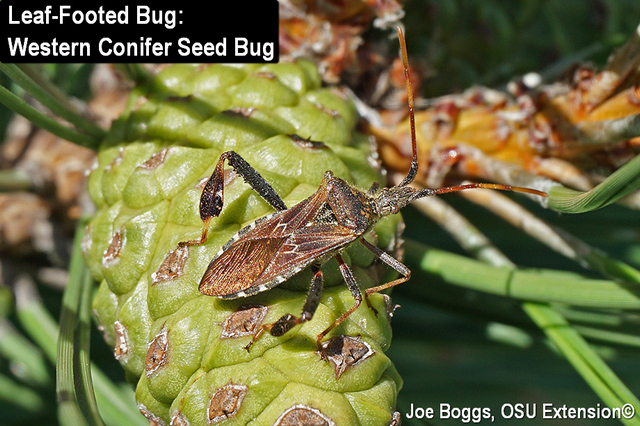 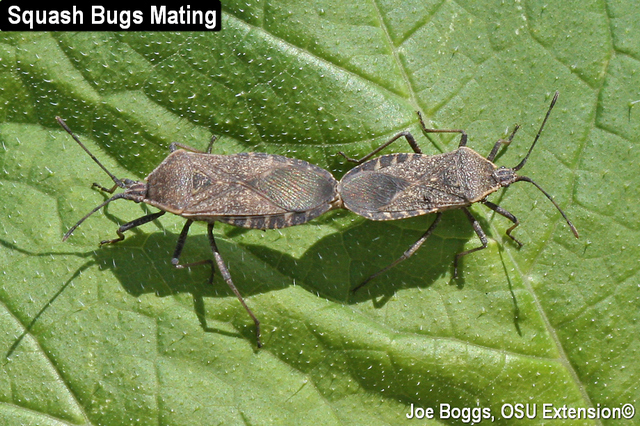 Research has shown that sex pheromones used by the southern green stink bug females to attract mates can be detected and used by the O&B fly to zero in on the bugs.  This devious host detection method is not unique to this fly; it's been reported with other tachinid flies.

Once a bug host is located, the O&B fly females lay single or multiple eggs on the surface of their host.  The resulting fly maggots bore into their host; however, only one maggot survives to consume the entire contents of their bug host.  Again, this is not unique to this fly, or even to flies.  There are some parasitoid wasps that also subject their offspring to a survival of the fittest test. 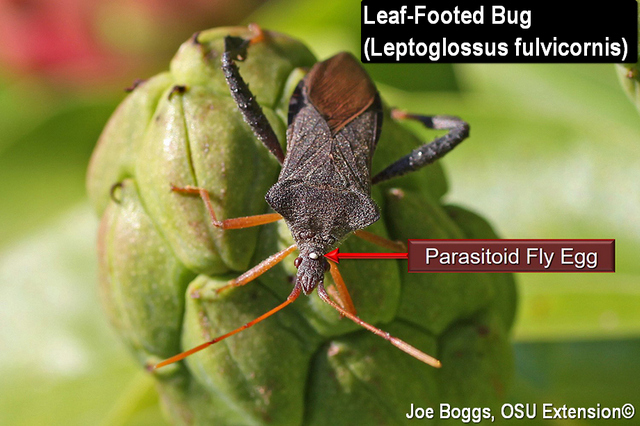 Some parasitism rates by the O&B fly that are reported outside of scientific publications sound too good to be true, so they probably are.  However, various research papers do indicate this fly can have some significant impacts under certain conditions.

For example, there appears to be a connection between nectar sources, successful adult mating, and higher rates of parasitism.  Yet another example of the value of providing food for a pollinator adult (e.g. butterfly gardens) so their parasitoid or predator offspring can help reduce the number of nearby plant pests.  Where have you heard that before? 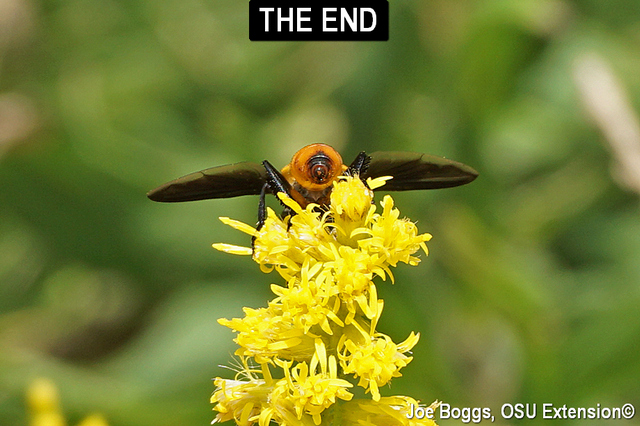