I received a container of ground cayenne peppers with a surprise far greater than the capsaicin kick.  The product was heavily infested with cigarette beetles (Lasioderma serricorne, family Anobiidae).  The homeowner noted they hadn't used the product for some time.  However, they had noticed small brown beetles buzzing around their home and collecting on their window seals. 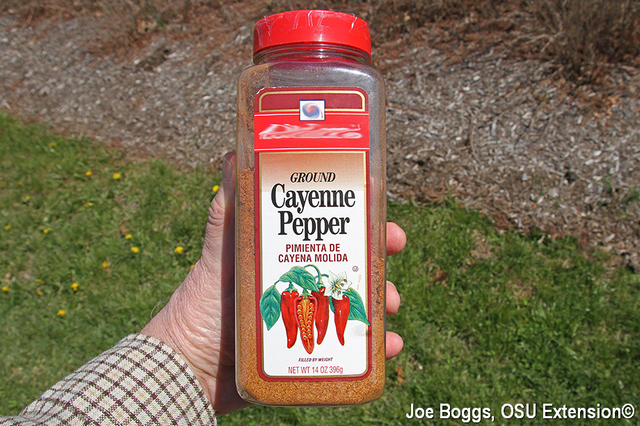 Cigarette beetles and drugstore beetles (Stegobium paniceum, family Anobiidae) are two common "pantry pests" in Ohio.  Both beetles are reddish-brown and may feed on the same products.  However, cigarette beetles are more rounded in their shape and covered in long hairs giving them a somewhat fuzzy appearance (see "More Information" below). 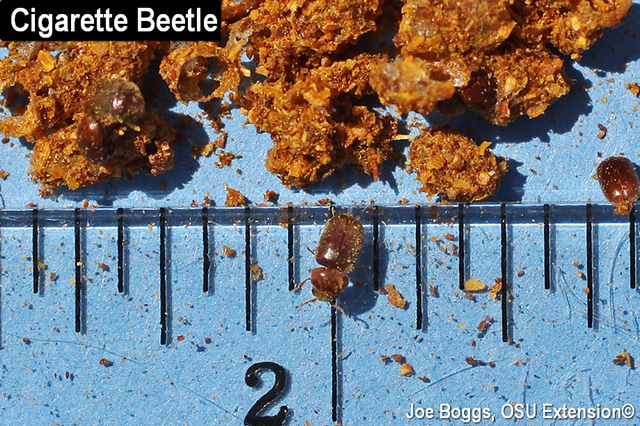 Cigarette beetles are so-named because they were commonly found feeding on tobacco products.  The beetles may also be found feeding and fouling a wide range of dried and processed products including paprika, chili powder, dried ginger, dates, raisins, dried pasta, pet foods, stored grains, cereals, and seeds of all sorts including birdseed and seeds found in dried flower arrangements.

Although their primary means of transport and spread is through infested materials, cigarette beetles also live outdoors and may find their way into homes.  For this reason, purchased products cannot always be blamed with certainty as being the source of a home pantry invasion.  Still, it's a good idea for products to be used before their "sell by" date and products being held in reserve to survive a zombie apocalypse should be periodically inspected.

Outdoors, the beetles are good flyers and most active at dusk.  They are attracted to light and I have found them buzzing around porch lights at night.  They reverse course inside homes with the beetles flying from darkened interiors to windows.  Homeowners may find a collection of dead beetle bodies on window seals which is a strong indication of a cigarette beetle infestation.

Finding cigarette beetles or any other pantry pest in a home should trigger an immediate search and destroy mission.  All possible food sources throughout the home (e.g. basements, attached garages) should be opened and inspected.  These beetles can spread rapidly throughout a home to produce many "satellite infestations." 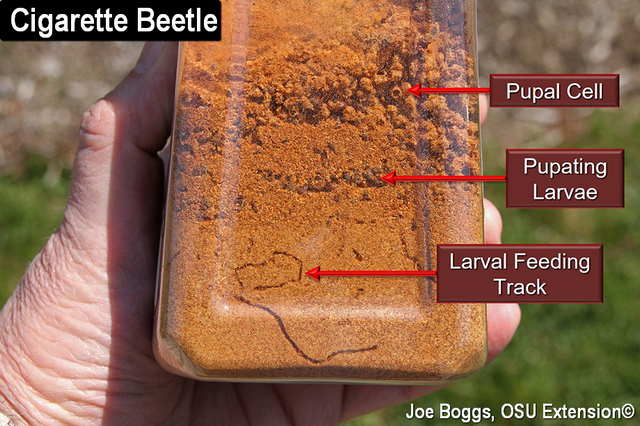 Infested products will include beetles; fuzzy, white, grub-like beetle larvae; and hardened pupal cells from which the adults emerge.  Of course, cigarette beetles change both the appearance and consistency of their food as they pass it through their gut.  Whether the product is a fine powder like ground cayenne peppers or large clumps like pet food or breakfast cereal, it will all get converted into sawdust-like frass (= excrement) in the end. 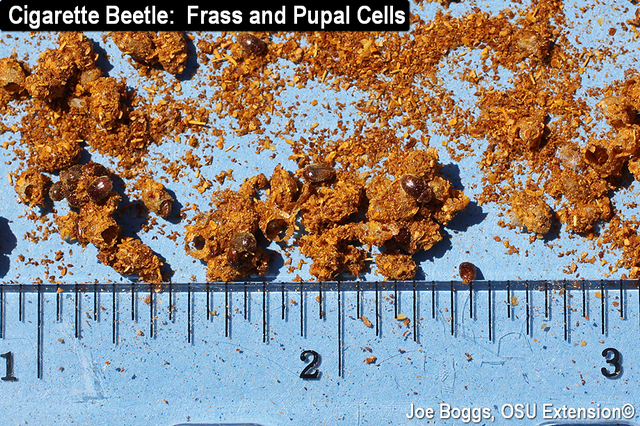 Traps are available that are baited with the female sex pheromone for the cigarette beetle, serricornin (4, 6-dimethyl-7-hydroxy-nonan-3-one).  The traps only attract males and are best used for monitoring to make certain a satellite infestation isn't missed.  The traps aren't effective enough in a home environment to eliminate an infestation.

On a final note, we discussed this infestation during our BYGL Zoom Inservice this morning and Pam Bennett (OSU Extension, Clark County) noted that finding cigarette beetles in the ground cayenne peppers should give pause to the idea that capsaicin (the "hot" in hot peppers) is a good insecticide.  Indeed, the infestation provided clear evidence that some insects, like cigarette beetles, can revel in it!