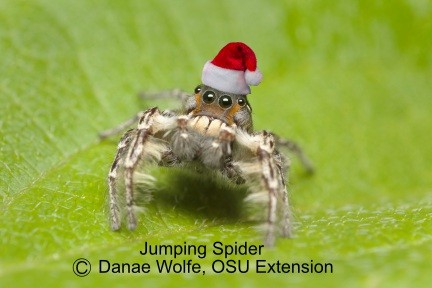 It's the holiday season (the holiday season...) and many are digging in attics and basements for decorations and bows, stored sweaters, coats and yes... SNOW boots.  Inevitably, Extension offices receive calls about the unfortunate spider (or stink bug) that was found, dead or alive, while sifting through packages, boxes or bags that haven't seen the light of day for a year.  The question is, "Is it a brown recluse?" 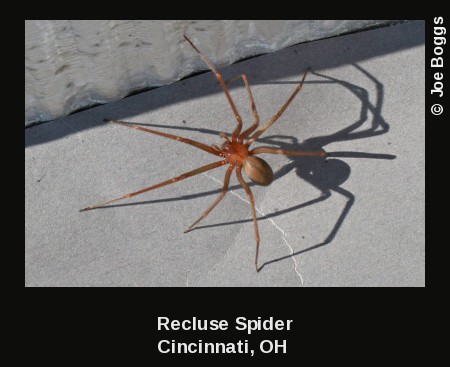 Remember that there are many different spiders that may come to inhabit our homes at one point or another, and cooler temperatures often facilitate home invasions from multiple insects and spiders alike. This includes some recluse look-alike spiders such as wolf spiders, funnel weaver spiders, and barn spiders.  These home invaders often make their way indoors for shelter, protection from the weather, or in search of food.  They are actually beneficial, providing pest control of other insects or arthropods you would rather not have, inside or out.  So, keeping them around is usually encouraged! 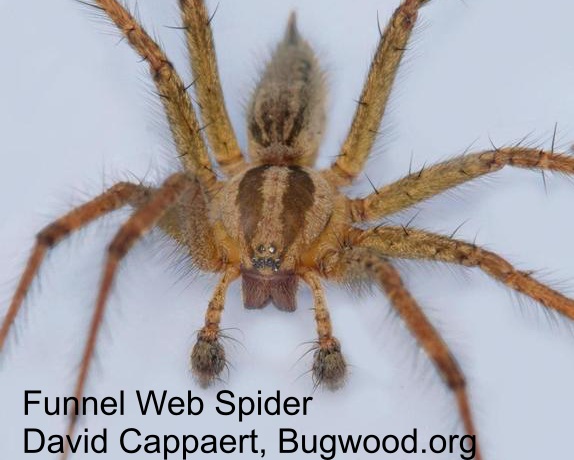 Funnel Web Spiders (seen here Agelenopsis sp.) are common home invaders.  Note how the stripes along the cephalothorax (head) and abdomen could be mistaken as the signature "fiddle" shape of a brown recluse.

Brown recluse spiders (Loxosceles reclusa) are not known to survive winter outdoors in Ohio, but they do survive well indoors and can be dispersed through movement of furniture or household goods to areas outside their generally considered "range".  Brown recluse spiders are secretive in nature.  As with many spiders, any undisturbed dark area could be a habitable space for them to hide out.  They, as with many other spider species, could inhabit garages, attics, basements and crawl spaces, behind wall voids, and hollow spaces.  Shed skins and egg sacs may be found near joists and tight protective spaces or under clutter, insulation, stored undisturbed boxes and stored clothing.  So when we run across any spider or critter that falls out of that artificial tree we just hauled upstairs, we often assume the worst.

They are named recluse for their shy and timid behavior.  People who come into contact with the poor creatures usually do so by stepping into a shoe or tossing on a stored item of clothing that has long sat and hasn't been washed or shook out for a long time.  In the face of the impending SQUISH, the spiders must lash out and bite as their only last defense.  And this is how many spider bites have happened, regardless of species.  Most arthropods only bite or sting in defense during accidental crushing or agitation.

The identifying character most cited for Brown Recluse is the "violin" or "fiddle" shape on its back (cephalothorax).  This description is actually a little subjective and sometime people mistake stripes or other patterns as the so-called fiddle.  A better key to identifying the brown recluse is its eyes.  Brown recluse have only 6 small eyes arranged in three pairs on the head.  With legs extended they are about the size of a quarter.  They are tan to brown in color and appear semi-hairless though they do have short sparse hairs as seen in the close-ups below. 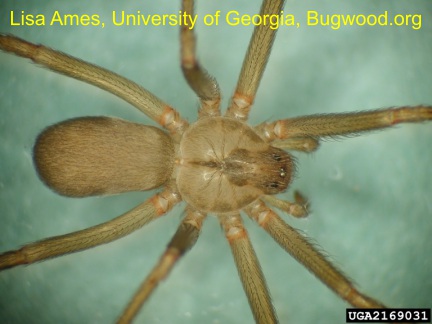 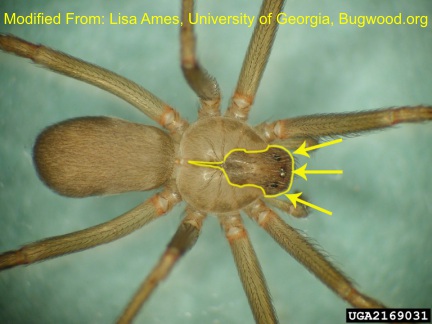 Brown Recluse, outlining the "fiddle" or violin-shape on the cephalothorax.  Arrows are pointing to the 3 pairs of eyes.

Here in Medina County, we have not had any confirmed samples brought into the Extension Office this season, which his not to say they could never be found.  But, in Richard Bradley's "In Ohio's Backyard: Spiders" he states, "This infamous family is represented by two RARE species in Ohio."  But that's not always the case for some of Ohio's more southern counties.

- Reduce clutter that serves as dark hiding places in basements, garages, and homes.

- Use gloves and wear long sleeves when unpacking boxes from storage.

- Be vigilant of what you are doing and where you are stepping in unfrequented spaces.  Use a bright flashlight to inspect dark corners you may be rustling around in if concerned about the presence of spiders.