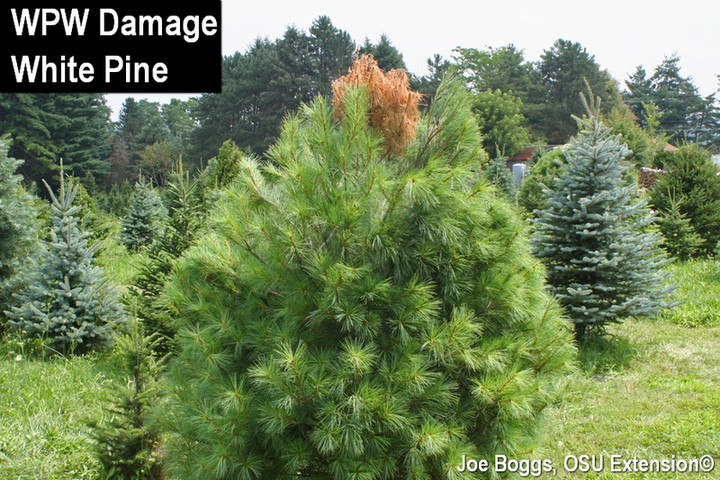 White Pine Weevil (Pissodes strobi) females spend the winter out of sight cooling their six heels in the duff beneath their pine or spruce targets. As temperatures warm in the spring, they climb their hosts to feed and lay eggs in the terminals. Sap oozing from small holes in the terminals is a calling card of this weevil.

Females begin to emerge from their winter abodes when the accumulated Growing Degree Days (GDD) reach 84. This roughly coincides with the full bloom of northern lights forsythia (Forsythiaxintermedia), speckled alder (Alnus incana), and cornelian cherry dogwood (Cornus mas). We have not yet reached the magic GDD number of 84 in southern Ohio; however, cornelian cherry dogwood bloom buds are beginning to show color meaning the weevils may soon be stirring. 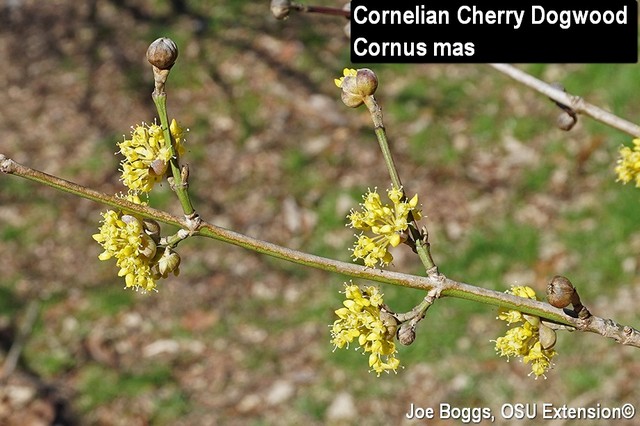 This native weevil has a wide conifer host range that includes Scotch, jack, red, pitch, and eastern white pines as well as Douglas-fir and all spruces. Indeed, the weevil's love of spruce is exemplified by its alternate common name, Engelmann Spruce Weevil, or simply Spruce Weevil. White pine weevil is not just found in Ohio; it ranges from the east coast west into the Rockies. 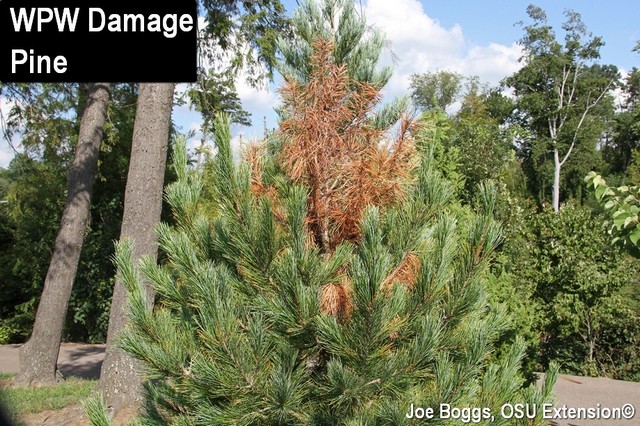 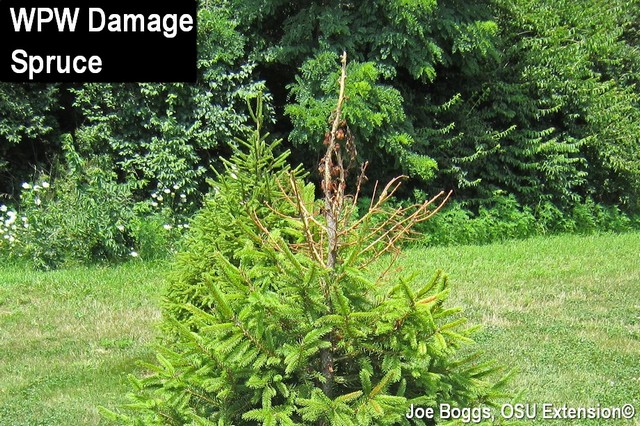 The females use their chewing mouthparts located at the tip of their long snout (rostrum) to chew small holes through the bark to feed on the sugar and nutrient-rich phloem. Eventually, they will turn around and deposit an egg in some of these holes.

The resulting white, legless, slightly curved, grub-like larvae tunnel downward side-by-side just beneath the bark feeding on the phloem. Pupation later this season is marked by the construction of so-called "chip cocoons" by the larvae prior to entering the pupal stage. 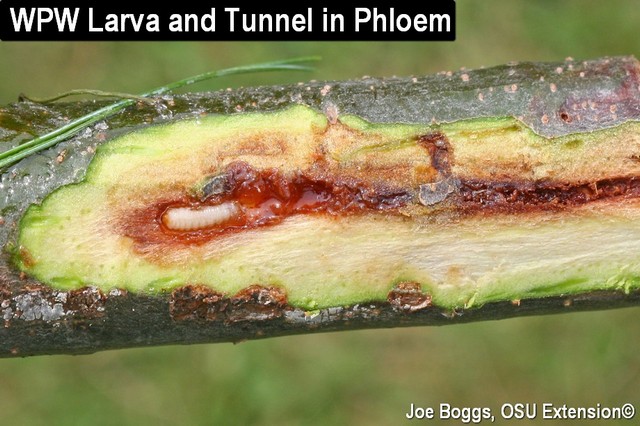 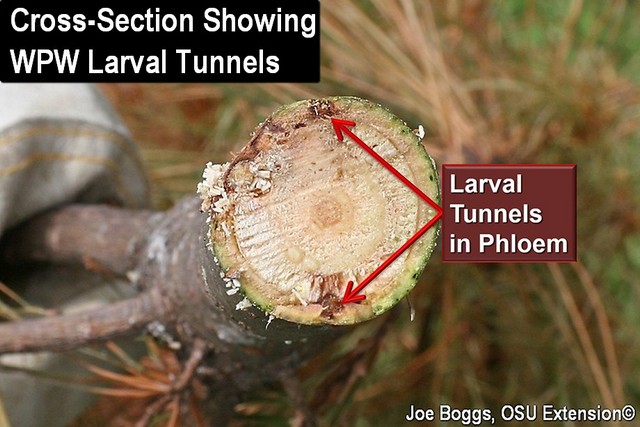 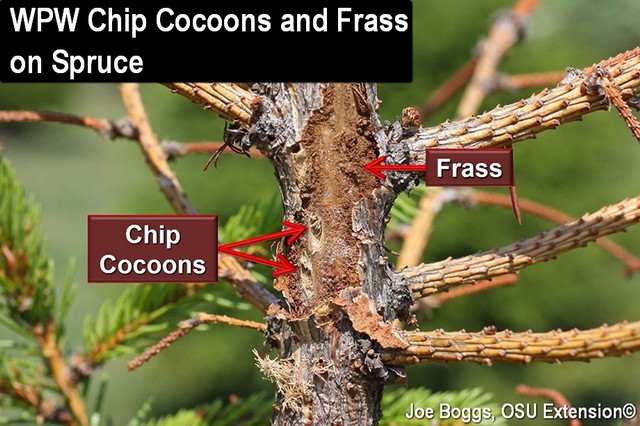 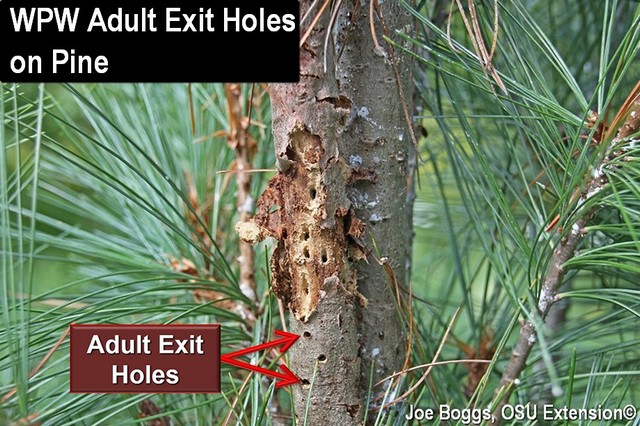 Infested leaders wilt, turn brown, and die. Dead leaders occurring in mid-summer which sometimes have a curved "shepherd's crook" appearance is another calling card of this weevil. New adults emerge from the infested terminals late in the season to feed and mate. Females of this second generation then crawl to the duff to spend the winter in preparation for sneaking up on us next spring. 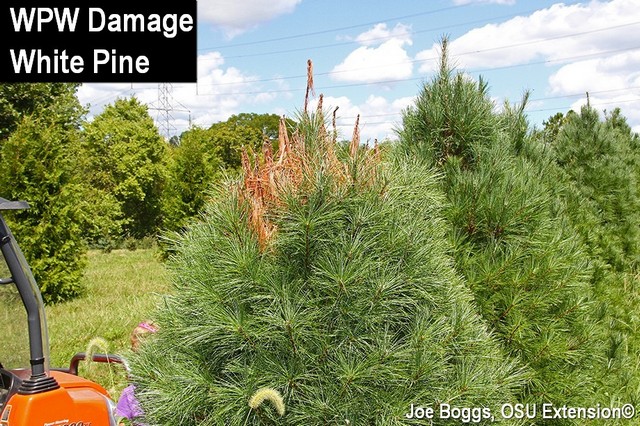 The weevils are capable of killing small trees less than 3' in height, but it does not kill large trees. However, years of successive damage to terminal leaders will eventually create "cabbage trees" which are short, squat trees with multiple terminal leaders in landscapes and woodlots. Of course, loss of the leaders presents a serious production problem in nurseries and Christmas tree plantations. 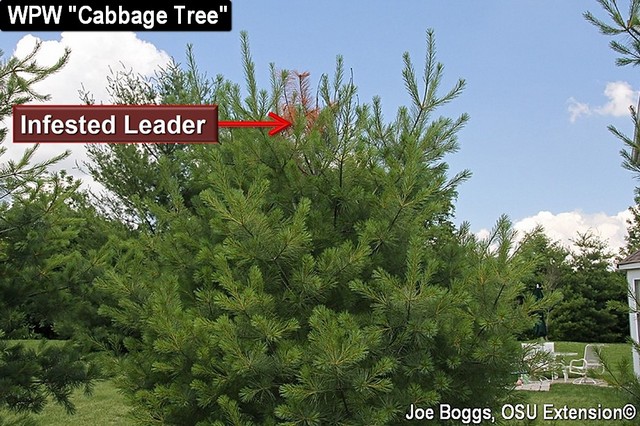 There are three effective suppression tools for reducing damage. The first is the application of a "borer spray" to the terminals to kill the females before they lay eggs. Effective products include those based on the active ingredients bifenthrin (e.g. Onyx), permethrin (e.g. Astro), or cyfluthrin (e.g. Tempo). A second application may be required depending on spring weather conditions and product label recommendations.

If female weevils make it through the terminal insecticide applications, the second suppression tool is to remove and destroy infested terminals prior to the emergence of the next generation of adults later this season. This will reduce the localized weevil population which is particularly effective where there are few conifer hosts growing in nearby forests or landscapes. I'll post a complete "how to" on this method later this season.

The third weevil management strategy is to make preventative systemic insecticide applications in the fall that target the weevils as they feed on the phloem the following spring. The systemics will also kill early instar larvae as they begin tunneling in the phloem but before they produce serious damage. Systemics such as imidacloprid (e.g. Merit, Nuprid 1.6F, etc.) may be applied using soil drench or soil injection applications. This preventative control measure should be reserved for landscapes, nurseries, or Christmas tree plantations that have a history of significant white pine weevil activity.