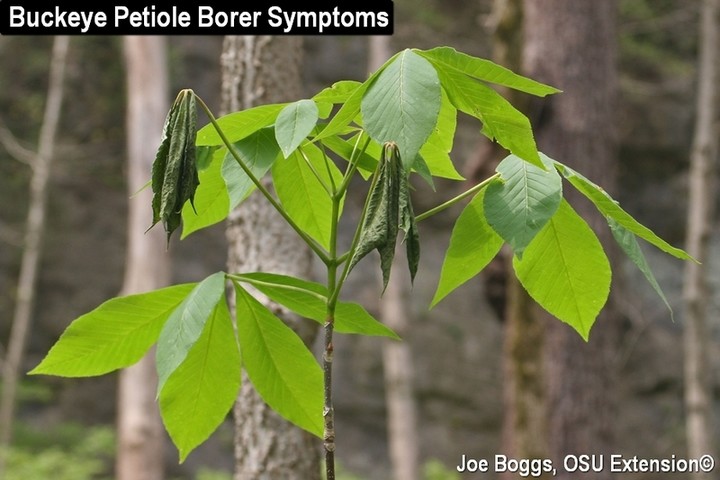 Buckeye and horsechestnut (Aesculusspp., family Sapindaceae) tree canopies tend to be remarkably free of insect pest damage except for the depredations of some general defoliators. However, if you're cruising Ohio woodlands this spring, you may run across three types of leaf damage. None of the damage appears to cause serious harm to overall tree health, but the symptoms can be obvious.

The literature notes this native moth is specific to Ohio buckeye (A. glabra); however, I've also observed petiole boring activity on yellow buckeye (A. flava). Look closely for a slight swelling, a spot-like discoloration, and a small hole in the petioles of affected leaves. Small quantities of sawdust-like frass (insect excrement) may hang from the hole. Clean holes usually indicate the caterpillars have completed their development and have exited for pupation. 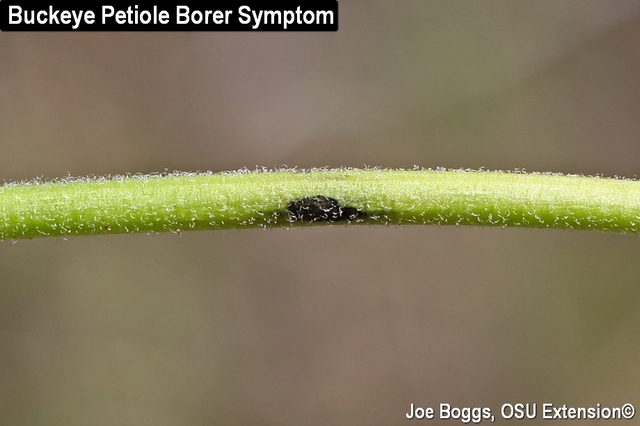 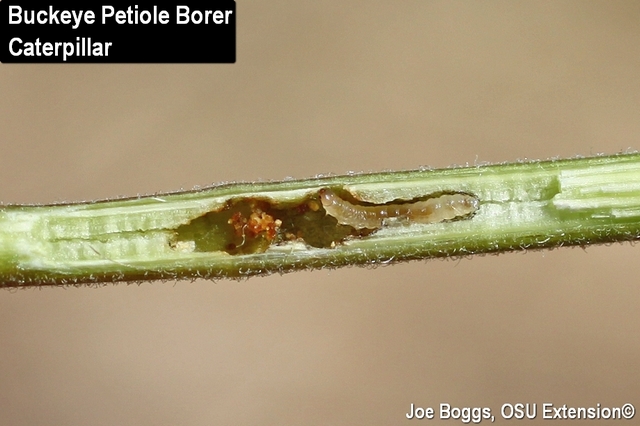 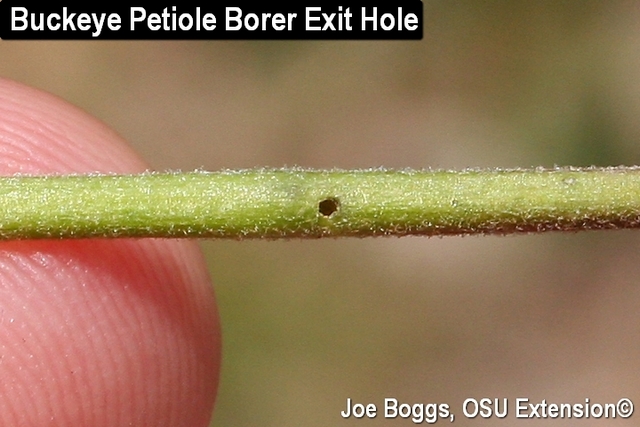 Amy Stone has reported that the handiwork of the buckeye petiole borer has been very evident in northwestern Ohio. Populations appear to be unusually low this season in the southwestern part of the state. However, there are two generations per season so damage may rise as the season progresses.

While looking for wilted leaves caused by the buckeye petiole borer, I came across the unusual damage caused by another member of the Tortricidae moth family: the fruittree leafroller (Archips argyrospila). As the common name indicates, the caterpillars have a wide host range and are considered a serious pest of apples and pears. However, this is not the first time I've found the light green caterpillars inside folded buckeye leaflets.

The caterpillars feed as skeletonizers inside folded or rolled buckeye leaflets bound together with silk. Damage to the underside of the leaflets produces browning on the "thin-skinned" upper leaf surface. Recently molted caterpillars have light green head capsules which eventually turn black. The caterpillars pupate inside their leaflet abode, so populations can be reduced by removing and destroying affected leaflets. 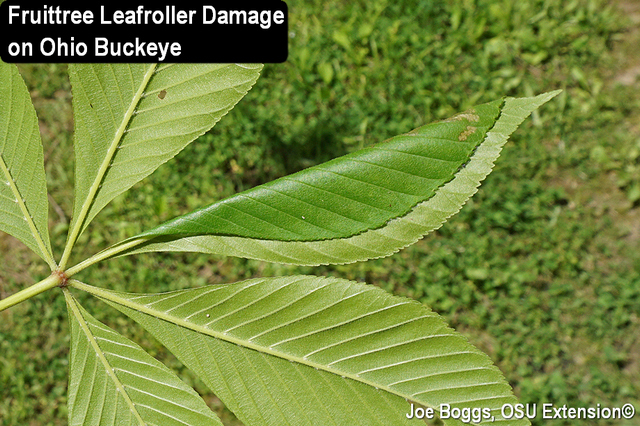 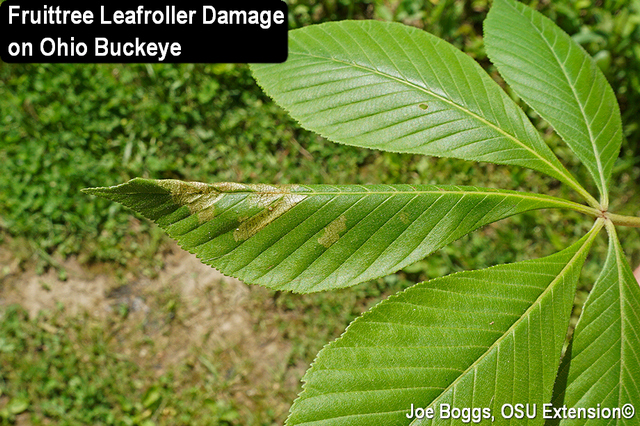 We have written a number of BYGL reports over the past several years on the springtime occurrence of leafmining damage to Ohio buckeye trees growing in woodlands. Leafmining insects create their mines by consuming the tissue sandwiched between the upper and lower leaf surfaces.

Opening the mines on buckeye leaflets reveal a tiny light green fly larvae (maggots). This remains an unidentified fly but it's most likely a member of the dipteran family Agromyzidae (leafmining flies). 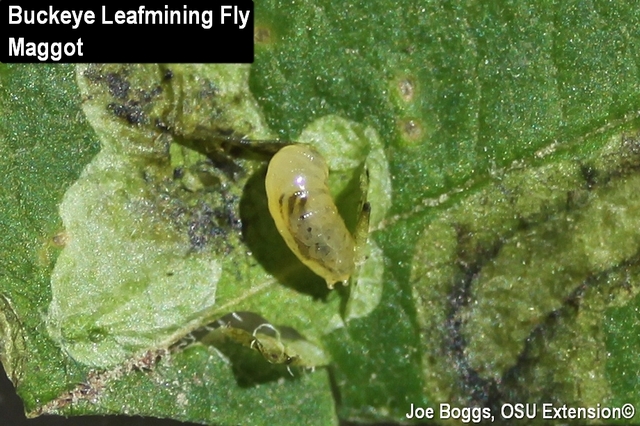 Thus far, I've only found this leafminer on wild Ohio buckeyes. I've never observed it on buckeyes in landscapes or on horsechestnuts. Since there is no scientific name or approved common name for this fly, I call it the "buckeye leafmining fly."

Buckeye leafmining fly maggots produce snaking (serpentine) leaf mines along the edges of the leaf or within the boundaries of the leaf veins. As the maggots mature, the mines simply become wider; they do not balloon into blotch mines. Leaves may be infested with only a single maggot that produces a meandering serpentine mine across much of the leaf or several maggots that produce parallel mines bounded by leaf veins. 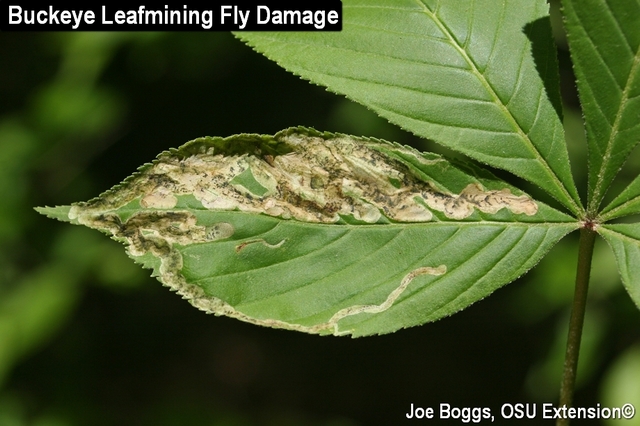 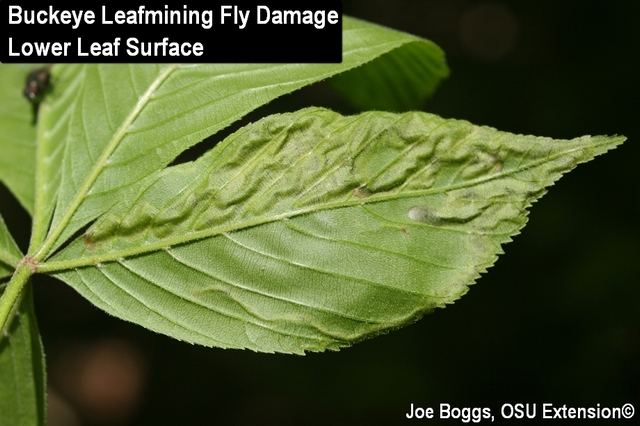 Like other agromyzids, females appear to use their sharp ovipositors to pierce the upper leaf surface so they can feed on the exuding sap. This produces tiny spot-like holes in the leaf surface; a symptom shared with other agromyzids such as the native holly leafminer (Phytomyza ilicicola). 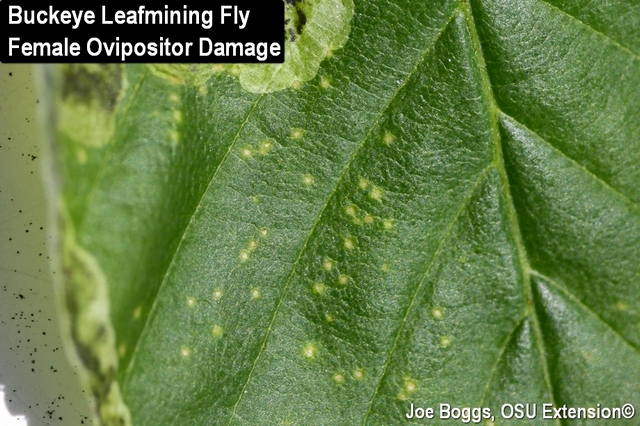 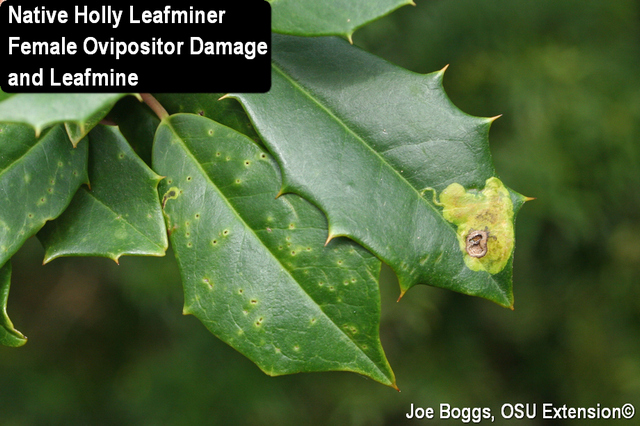 Although I've seen heavy some heavy leafmining damage on small Ohio buckeyes, populations appear to rise and fall dramatically from year-to-year. I've never seen repeat damage over multiple years meaning that trees have time to recover after an outbreak.

Cautionary Note: a Google search using the keywords "Aesculusleafminer" may point you in the direction of the notorious horsechestnut leafminer (Cameraria ohridella) which is a leafmining moth (family Gracillariidae) that is wreaking havoc on its namesake host in Europe. However, this leafminer has not been found in North America.