Participants in today's Greater Cincinnati BYGLive! Diagnostic Walk-About had a successful snipe hunt at the Cincinnati Nature Center. I'm not talking about the mythical forest creature that's only ever been seen by camp counselors or older siblings.

I'm referring to the golden-backedsnipefly (Chrysopilus thoracicus, family Rhagionidae). The group observed several of these stunning black-bodied flies perched on the leaves of understory sycamores.

The "golden-backed" in the common name refers to the highly reflective golden hairs covering the top of the thorax. Its scientific name also describes this striking feature: "Chrysopilus" means "golden hair" andthoracicusrefers to the thorax. The eye-catching spot-of-gold marking is framed by smoky wings with dark veins. 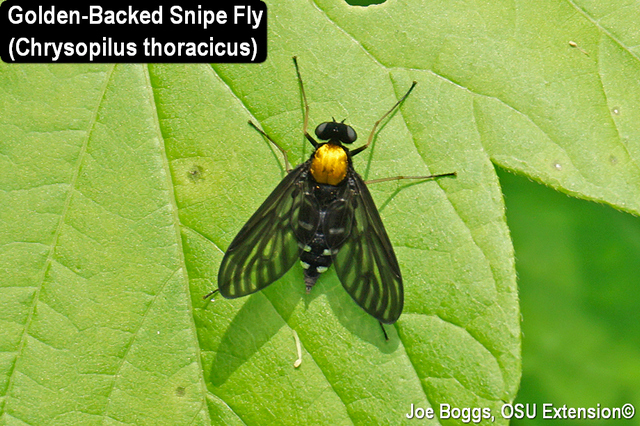 Little is known about this native fly's life-cycle and lifestyle. Its most often observed in the forests of the eastern U.S. and appears to have one generation per season with peak numbers occurring in late-May to early-June.

The "snipe" in the common name is shared by all flies belonging to Rhagionidae family. It's not a large family with only 16 genera worldwide. The adults of most species are predators that use specialized piercing-sucking mouthparts to suck the life out of insect victims; they snipe other insects.

However, a predatory lifestyle has never been proven forChrysopilus thoracicus. In fact, adults have been observed visiting the flowers of a number of native plants, including elderberry, fueling the speculation that they are feeding on nectar and/or pollen. Of course, maybe they wash down their meat meals with a little nectar?

It is known that the larvae (maggots) live in the soil, but exactly what they do there isn't firmly known. Some observations suggest the maggots consume decaying organic matter while other reports indicate they may also opportunistically feed as predators on soft-bodied insects. Again, nothing has been proven.

While the golden-backed snipe fly proves that snipe hunting is not a futile exercise, there is much about this fly that remains a mystery. One might even say it's a riddle, wrapped in a golden fleece, inside an enigma. Not be a bad description for the mythical nocturnal forest creature that shares its common name.