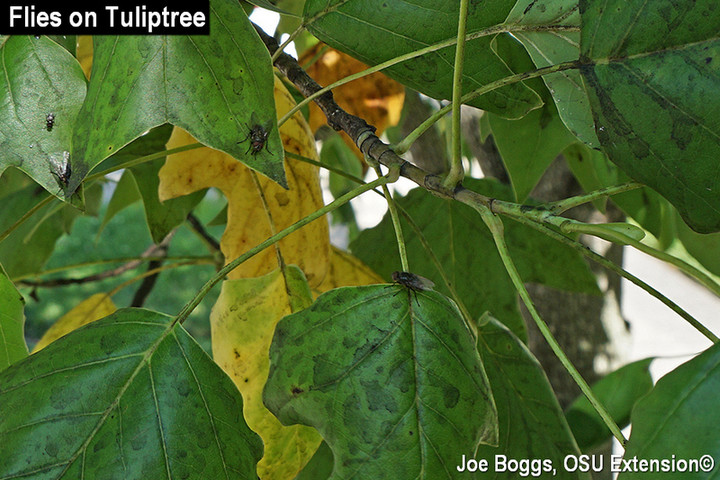 I received the following question through eXtension's Ask an Expert (AaE) with the header, "Flies all over tulip poplar":

We have a tulip poplar, and it has flies (look like standard house flies) ALLLLL over the leaves. There are a few yellow/withered looking leaves, but otherwise tree looks fine. Any thoughts on why it would have SO MANY flies all over it, and ideas on how to dissuade them?

My answer focused on two pests of tuliptrees (Liriodendron tulipifera): tuliptree aphid (Illinoia liriodendri) and tuliptree scale (Toumeyella liriodendri) which is a type of "soft scale." Neither of these native insects has a common name that has been approved by the Entomological Society of America. So, their names may sometimes match the multiple common names of tuliptree (tulip tree, tulip poplar, yellow poplar). You may find tuliptree aphid called tulip poplar aphid, or yellow poplar aphid. 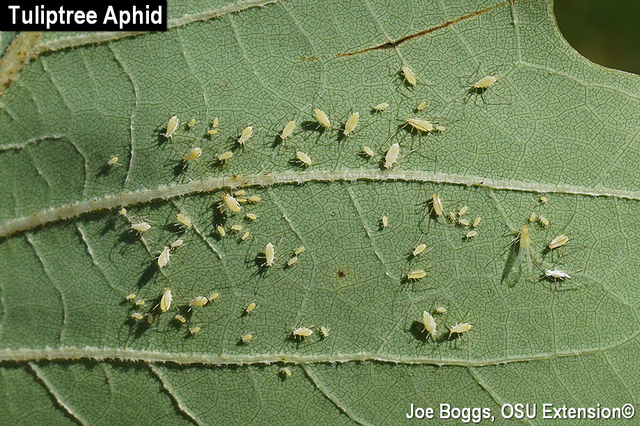 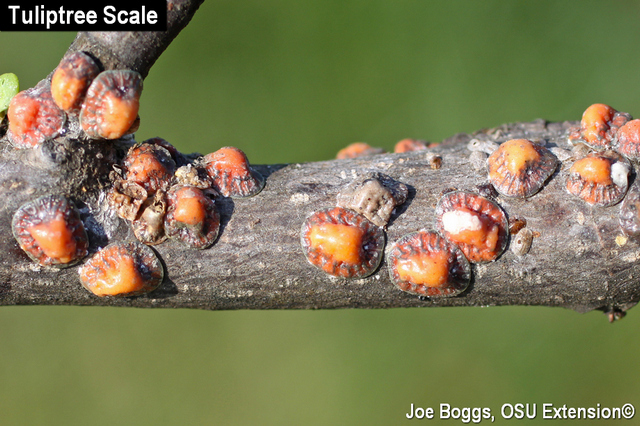 Both the tuliptree aphid and tuliptree scale feed by inserting their piercing-sucking mouthparts into phloem vessels to tap plant sap. They withdraw carbohydrates which provide energy andextract amino acids which are building blocks for proteins. However, the sap only contains trace amounts of amino acids compared to huge amounts of dissolved carbohydrates.

This means they must process a large amount of sap to extract the small quantity of amino acids. They discharge the excess sugar-rich liquid from their anus in the form of a sticky, sugar fluid called "honeydew" which is actually a nice name for scale or aphid diarrhea.

The honeydew drips onto the leaves and stems of the host plant as well as understory plants. It commonly attracts a plethora of freeloading sugar-sippers including bees, wasps, ants … and flies.

The honeydew on leaves and stems also eventually becomes colonized by black sooty molds. Although the molds do not harm plants; they're not pathogenic, heavy leaf coverage on small plants could interfere with photosynthesis. The blackened leaves also reduce the aesthetic appeal of heavily infested trees. 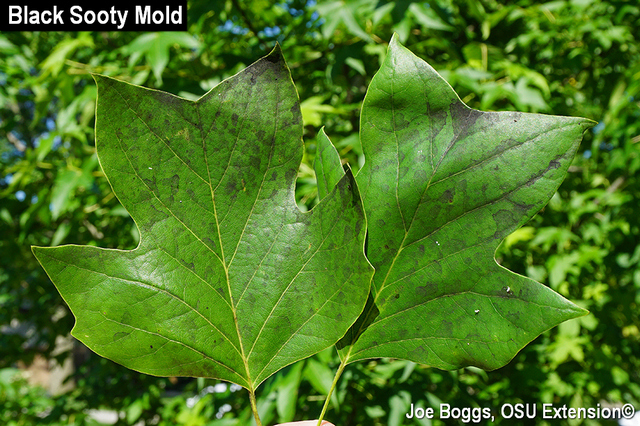 I visited the tuliptree and found the fly-drawing culprit was tuliptree aphids. I commonly find a few tuliptree aphids sprinkled here and there on the undersides of the leaves of their namesake host. Tuliptree scale is much less common. However, the tree did have one of the highest aphid populations that I've seen in years. Despite the high aphid population, the tree looked healthy. There were a small number of yellowed inner leaves which is not unusual for tuliptrees at this time of the year. 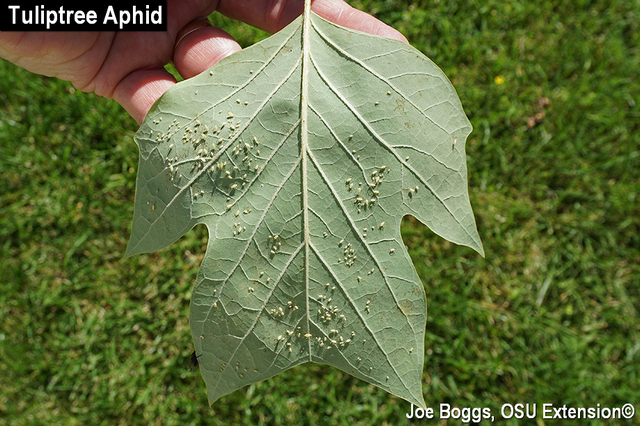 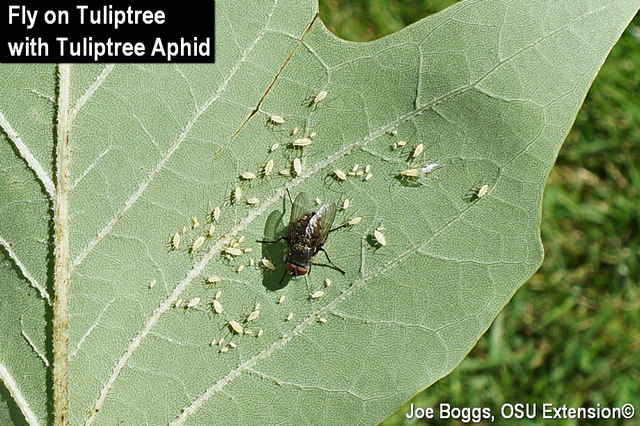 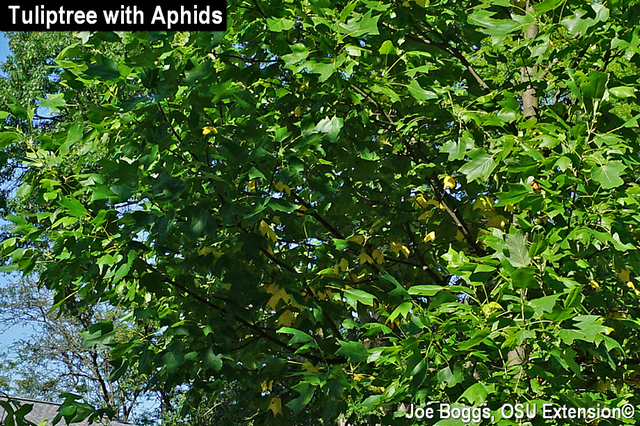 As with many native tree pests, periodical outbreaks of the aphid and the scale do occur. The good news is that both of these sap-sucking insects have a large number of natural enemies that usually "crash" outbreak populations before significant injury occurs to their tuliptree host. So treatments are not needed. 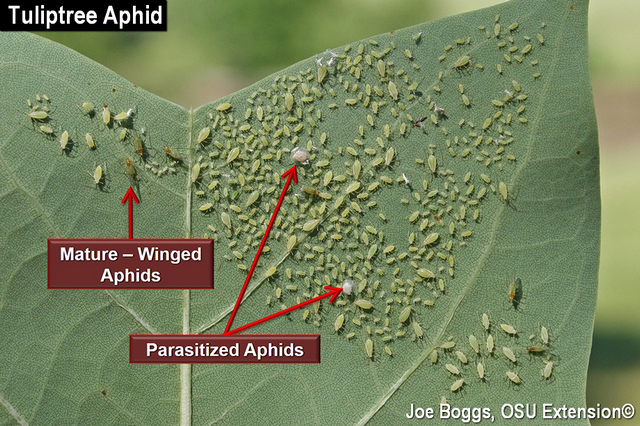 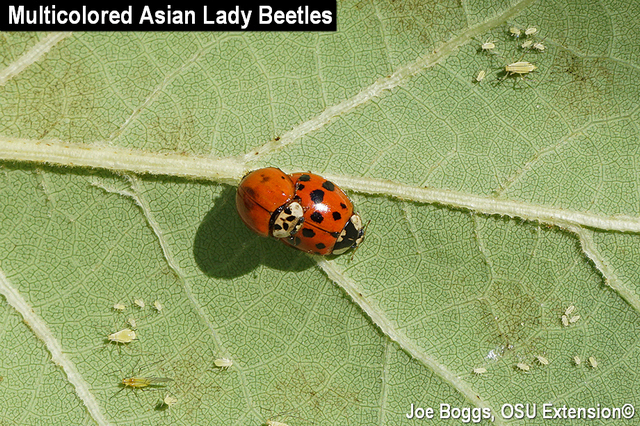 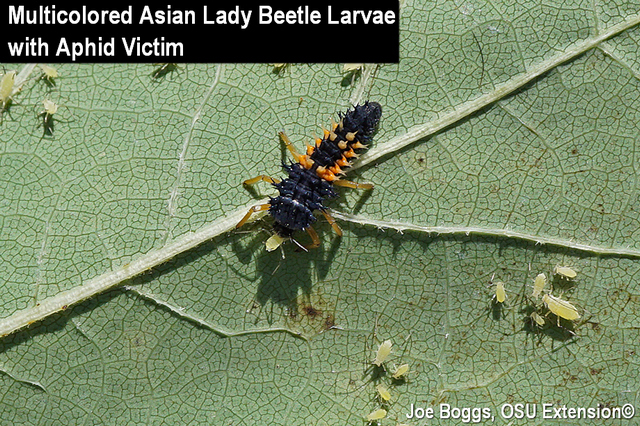 The Dastardly Demise of the Flies

While photographing the aphids and the flies, I came across a large number of dead flies stuck-fast to the tuliptree's leaves and stems. Some looked normal but were lethargic; they didn't fly when I touched them. Others were in various stages of falling apart and some had fungal structures bursting forth between the segments of their enlarged, distended abdomens. 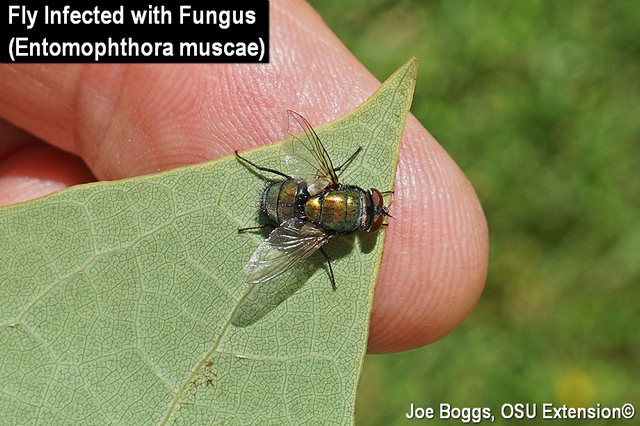 All provided clear evidence that a fungus,Entomophthora muscae, was taking advantage of the aphid related fly-gathering to further its fly-killing lifestyle. The scientific name says it all: Entomo means "insect,"phthora means "destroyer," andmuscaeis Latin for "fly."

The fungus was first described back in 1855 based on isolations from houseflies,Musca domestica. It has since been found killing a wide range of flies across several fly families including "beneficial" flies such as Syrphidae (hoverflies) with maggots that eat aphids. E. muscaeis an indiscriminate sneaky fly-killer.

Specialized fungal structures calledconidiophoresproduce infectious sticky spores calledconidia(plural). Flies become infected if they pick up a spore from a leaf surface, or if they bump into an infected fly (more on this later). It only takes one spore (singular:conidium) to doom the uninfected. 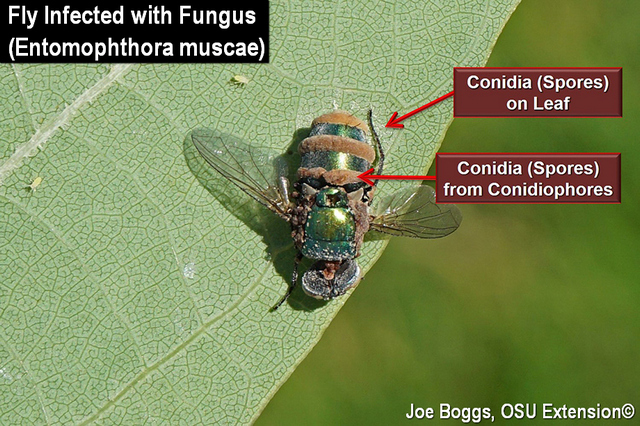 The conidium germinates shortly after contacting a fly to produce a germ tube that penetrates the fly's cuticle. Once the fungus is inside, it proliferates while consuming the fly's blood (hemolymph). Critically ill flies tend to crawl up vertical surfaces to die in an elevated spot where the fungus sticks them to substrate. The sick flies are "sucked dry" by the fungus in 5 – 7 days.

A few hours after a fly dies, its fungal-filled abdomen begins to swell and become distended. Conidiophores burst through the membranes between the abdominal segments of the enlarged abdomen to produce thousands of conidia. The release of conidia from the cadaver is termed a "conidial shower." If a fly dies on a windowpane, you can see the conidia in the form of a halo on the glass around the body. But, the flies may not have lived without sin.

In the wise words of Forest Gump: And, that's all I have to say about that. 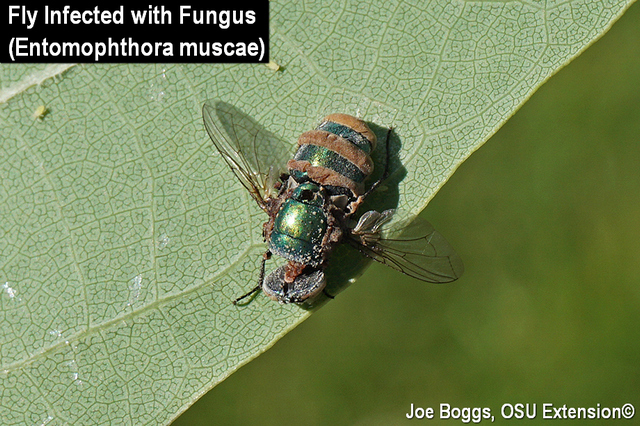