Everyone knows that bees love to visit flowers, but not everything that you see visiting flowers or buzzing around the garden is a bee. In fact, many insects imitate bees in order to avoid unwanted attention. Whether you call them “bee-mimics,” “wanna-bees” or “yellow-stripey-things,” most are beneficial helpers in our yards and gardens. This brief guide will help you tell some of these insects apart.

Some flies, especially hover flies and bee flies, can be mistaken for bees because their body form, color and hair patterns, buzzing sounds and behaviors mimic bees. Flies have a set of front wings (forewings), but the hind wings are small, knob-like balancing organs called halteres, so flies appear to have only two wings (Figure 1, red circles). Bees have well developed forewings and hind wings. 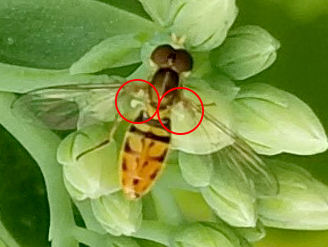 Some flies, especially bee flies, can be hairy like honey bees (Figure 2), bumble bees and digger bees, and can hover and move quickly from flower to flower while foraging, just like bees. Flies do not sting people. 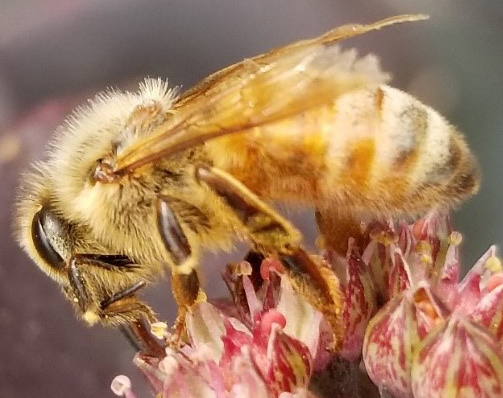 Several hover fly species (Figures 1 and 3) resemble bees in coloration, behavior and size. Most hover flies are 5 to 15 millimeters long and have large heads with reddish or marbled black eyes, two clear wings and black and yellow color patterns on the abdomen and sometimes on the thorax. Some hover flies are quite hairy while others are not.

Hover flies buzz and hover like bees around flowers. They feed on pollen and nectar, often using the same flowers that bees do. Some hover fly larvae are aphid predators and provide biological pest control. 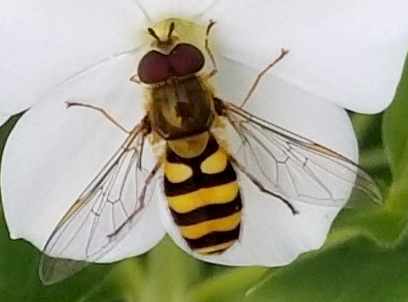 Bee flies (Figure 4) are about 7 to 15 millimeters long and have stout bodies covered with yellow, black or brown hairs. Different species can have transparent or patterned wings. Bee flies have a long proboscis (tongue) and feed on pollen and nectar. 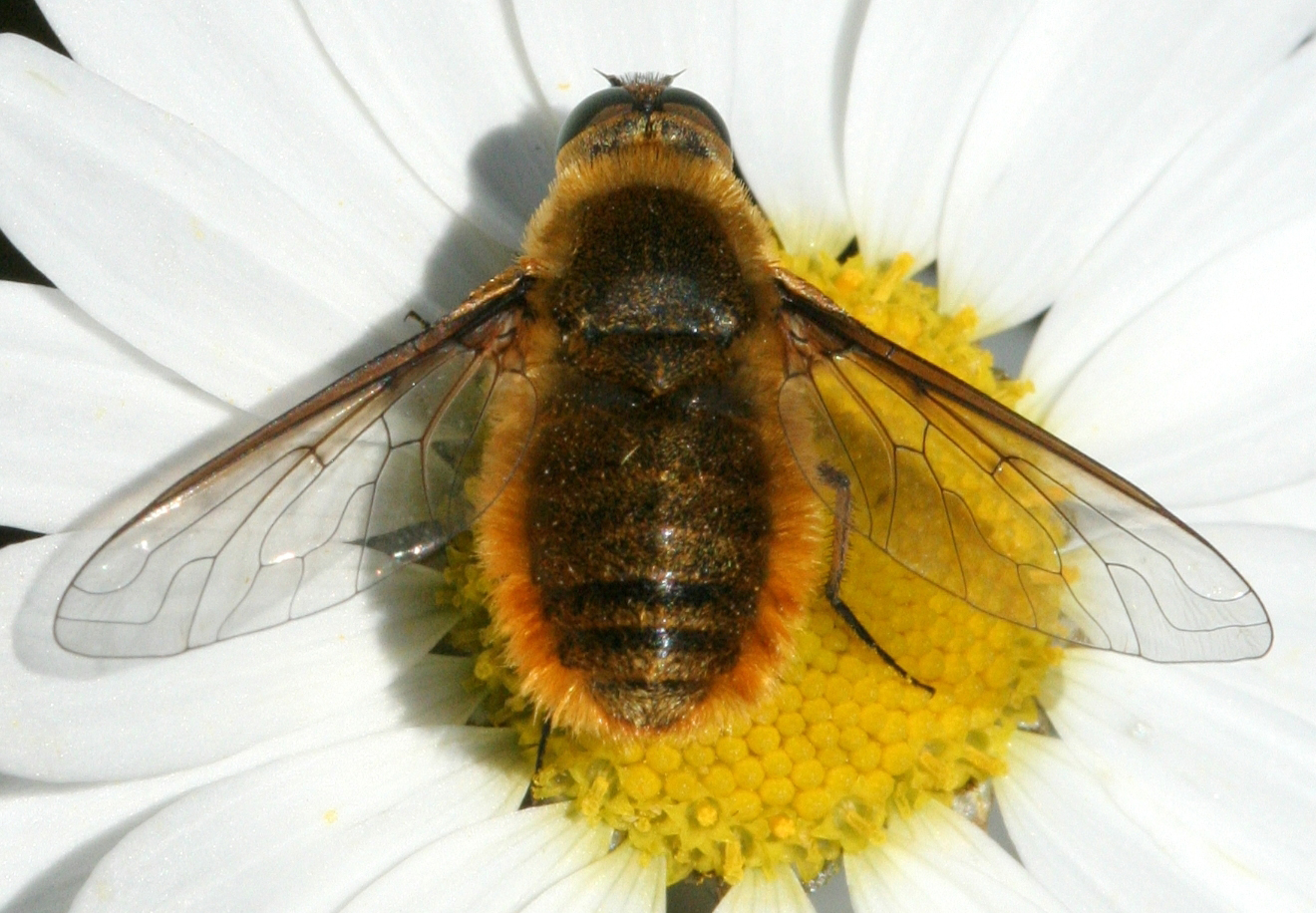 Similar to bees, wasps have four developed wings, long segmented antennae and a distinctly visible narrow “waist” (Figure 5) due to a constriction between the thorax and abdomen. Bees also have a constricted waist, but it isn’t readily visible. Wasps are much less hairy than most bees (Figures 2 and 6). Wasps’ hairs are not branched, while bees’ are branched, but you will need a microscope to see this. 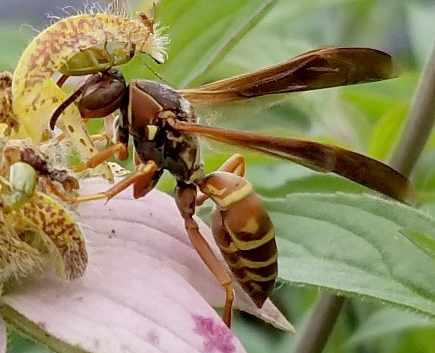 Figure 5. Paper wasp. Note the waist between the thorax and abdomen. Photo by Veronica Calles-Torrez, NDSU.

Most bees have special pollen-collecting hairs on their hind legs and collected pollen is easy to see (Figure 6). Leaf-cutting bees collect and carry pollen on hairs underneath their abdomens. Also, wasps have brighter colorations and patterns, and wider range of color and pattern variations than bees. 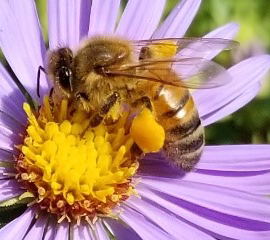 These insects are strikingly patterned with black and yellow. They hold their wings folded lengthwise over their bodies like a jet.Yellowjackets(Figure 7) are approximately 12 to 25 millimeters long. Their face is mostly yellow, except for black eyes and black antennae. Yellowjackets have yellow and black bands on the abdomen and usually nest in the ground. 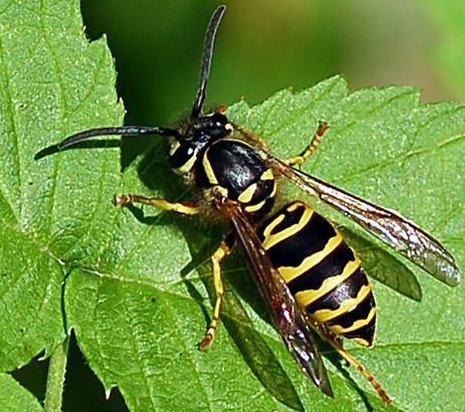 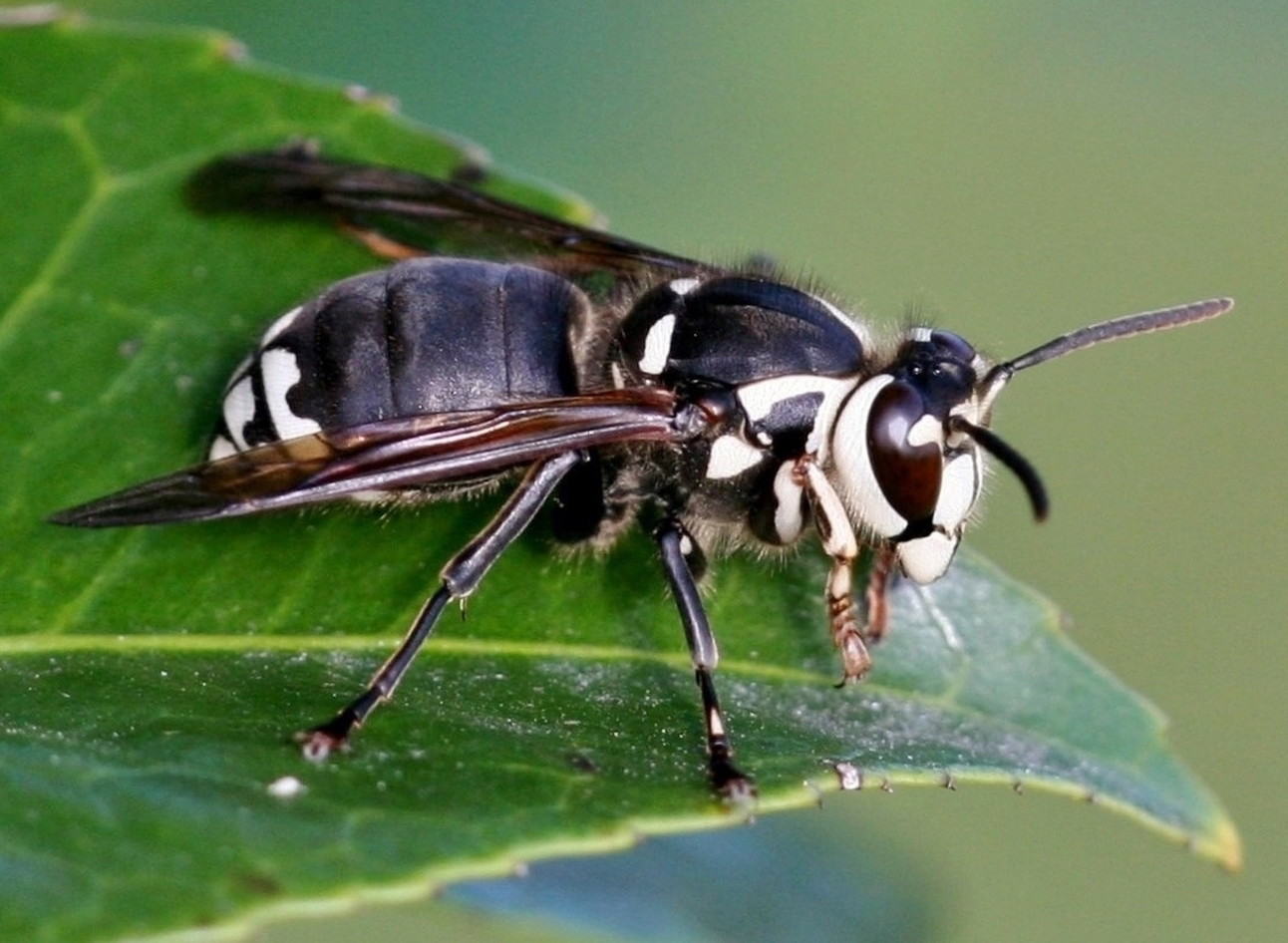 Cicada killers (Family: Crabronidae)(Figure 9) are large wasps 20 to 50 millimeters long. They have a yellow face brick-red eyes and a black abdomen with yellow bands. Wings are lightly infused with brown and the legs are red. As its name implies, Cicada killer wasps prey on cicadas. They do not have nest guarding instincts like wasps and honey bees. These impressive looking wasps are not aggressive, but females do have stingers and can sting when they feel threatened. 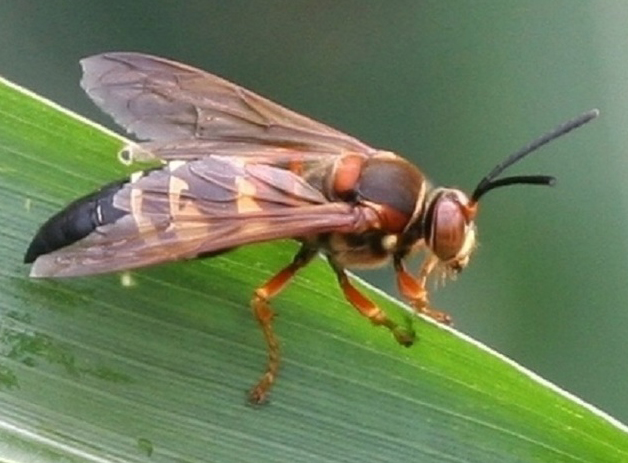