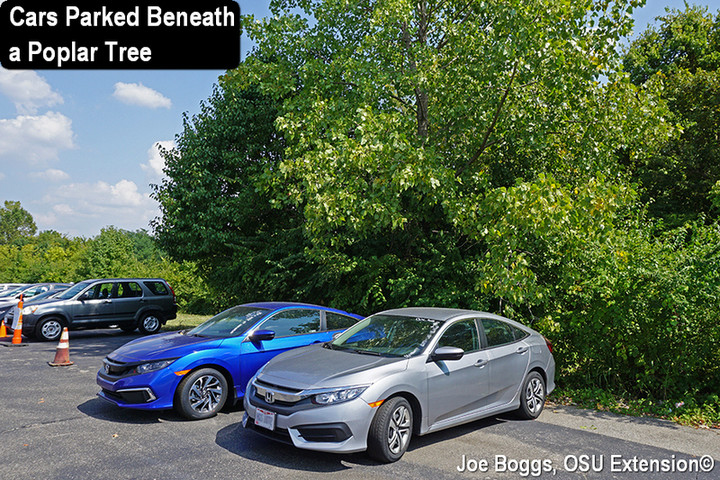 During a recent visit to a car dealership for an oil change, I spotted two coups at the back of their lot sporting a white-speckled color scheme. Both cars were parked beneath a poplar (Populussp.) and a closed examination revealed the source of the striking color pattern as well as an interesting insect partnership. 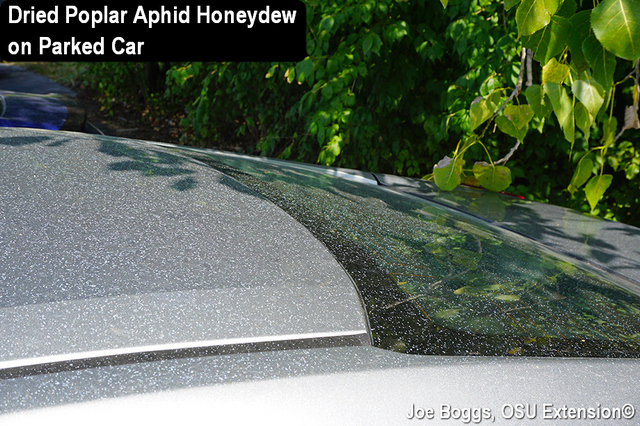 The poplar was heavily infested with Poplar Aphids (Chaitophorus populicola, family Aphididae) being "tended" by Black Field Ants (Formica subsericea, family Formicidae). The name "field ants" is not confined to this species; it's applied to a wide array of ant species found in fields and lawns. 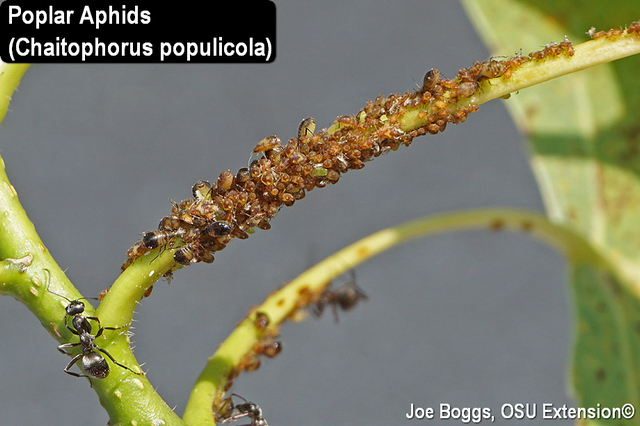 As with all aphids, poplar aphids feed by inserting their piercing-sucking mouthparts into phloem vessels to tap plant sap. They withdraw carbohydrates which provide energy and extract amino acids which are building blocks for proteins. However, the sap only contains trace amounts of amino acids meaning the aphids must process a large amount of sap to extract the small amount of dissolved amino acids.

Aphids discharge the excess sugar-rich liquid from their anus in the form of a sticky, sugary fluid called "honeydew" which is actually a nice name for aphid diarrhea. The honeydew drips onto the leaves and stems of the host plant as well as understory plants, sidewalks, and of course, parked cars.

Honeydew is commonly colonized by black sooty molds. However, this had not occurred on the parked cars. Perhaps high temperatures on the sunbaked paint surfaces put the kibosh on fungal growth. I noted that the baked-on honeydew could easily be removed with water and there appeared to be no damage to the underlying clear coated paint. 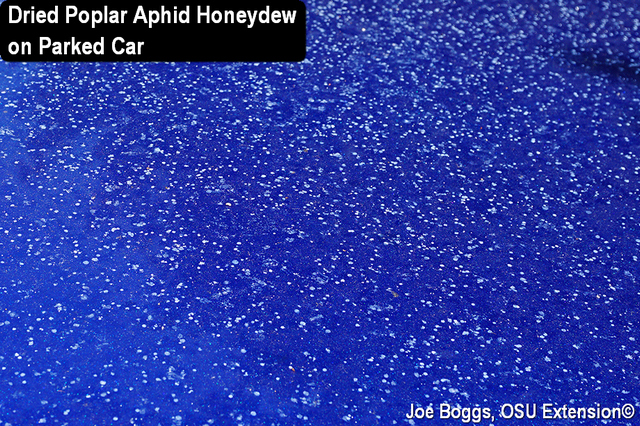 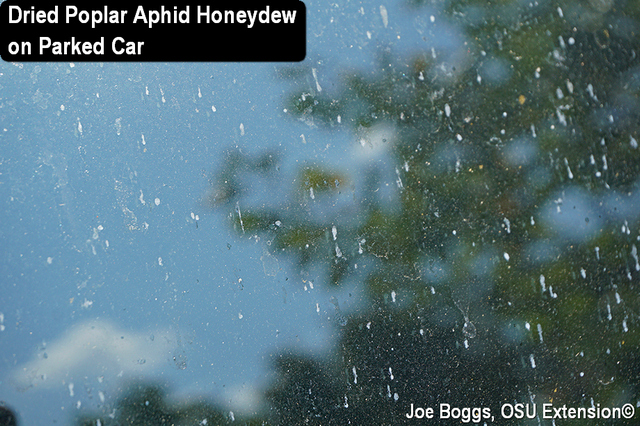 The poplar aphids are true myrmecophiles (mymerco = ant; phile = lover). I've never observed a colony of these aphids that were not being tended by ants in exchange for honeydew. They are often under the protection of Carpenter Ants (Camponotussp.) with some species being the same size as field ants. You can tell the difference between carpenter ants and field ants by looking at the top of their thoraxes. Field ants have a distinct dent in the top of their thorax; carpenter ants have a smooth thorax. 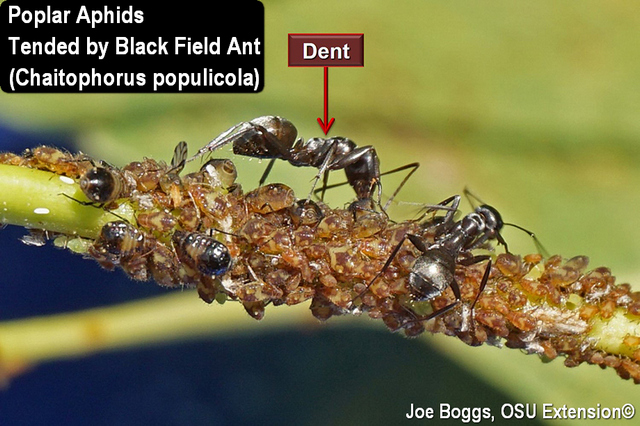 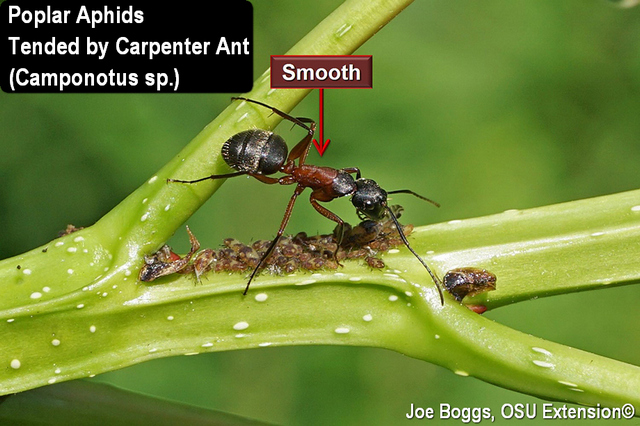 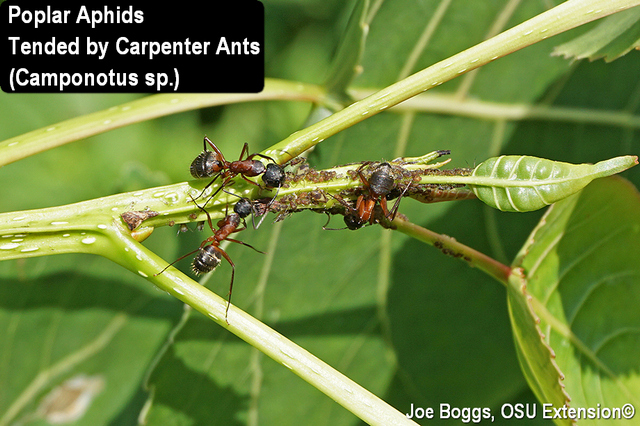 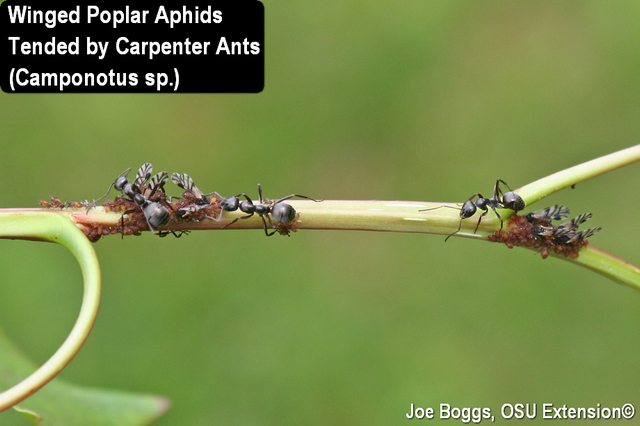 On a side note, field ants are important beneficial insects commonly attacking plant pests. They are well-known predators and readily chow down on soft-bodied insects such as caterpillars and sawflies. However, they put their carnivorous nature aside to provide protective services to aphids in exchange for a honeydew sweet treat. They will even move aphids to new locations to spread the colony.

Given the ants aggressive protective and predatory behavior, I'm at a loss to explain how a predaceous midge fly larva (maggot) had managed to infiltrate the aphid colony and remain unmolested. I tentatively identified the midge maggot asAphidoletes aphidimyza(family Cecidomyiidae) which is a well-known aphid predator. 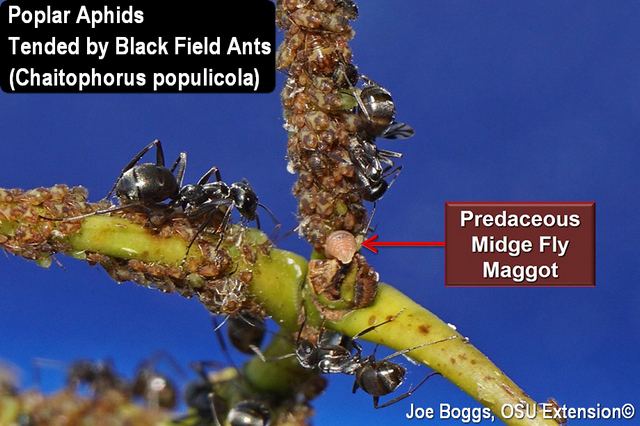 The vast majority of cecidomyiid midges are gall-making plant feeders; "cecido-" is derived from the Greekkekis, meaning “gallnut." However, this species is a notable exception. It is a voracious aphid predator and has been documented feeding on over 60 different species of aphids. A. aphidimyza has become significant long-term biocontrol agent for managing aphids on greenhouse crops.