Everyone anticipates spring’s arrival and subsequent awakening of plants from their winter slumber. If you’re like me, every plant exhibiting signs of life is exciting: from the complex flowersAcer saccharinumto the showy flowers of themagnolias, all are welcome. AtSecrest Arboretumyou can find many plants that remain unknown to the average gardener, but there is one plant that seems to remain in obscurity-Helleborous,or Lenten Rose. The people who know and grow this plant love it, but for others it remains a mystery. I am stunned whenever I show the plants atSecrest Arboretumto various groups how many gardeners don’t know this wonderful harbinger of spring. 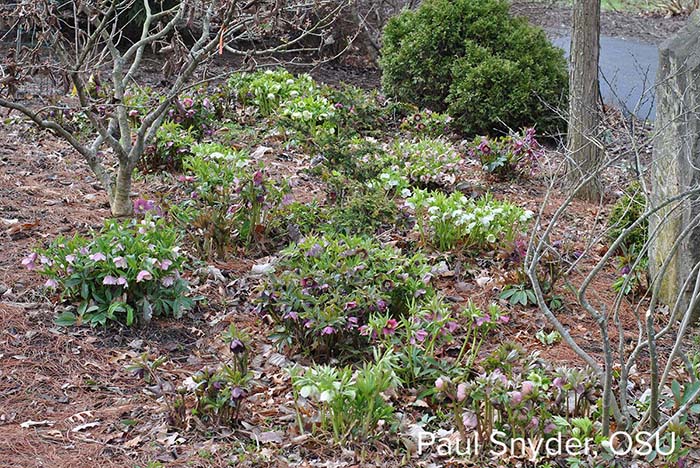 Hellebores, a member of theRanunculaceae,are perennial plants native to Europe where they are found in open meadows. In our gardens we usually plant them in the shade in moist but well-drained soils, though they will thrive under drier conditions of neglect. Hellebores are susceptible to root rots in wet soils, so avoid planting in such locations.

The showy part of the plant, what we would call the petals, are not petals at all, they are actually sepals.Sepalsserve to protect the developing reproductive structures on the inside. The real petals are inside the sepals and are considered tubular nectaries. Hellebores can flower anywhere from January to April depending on the species. 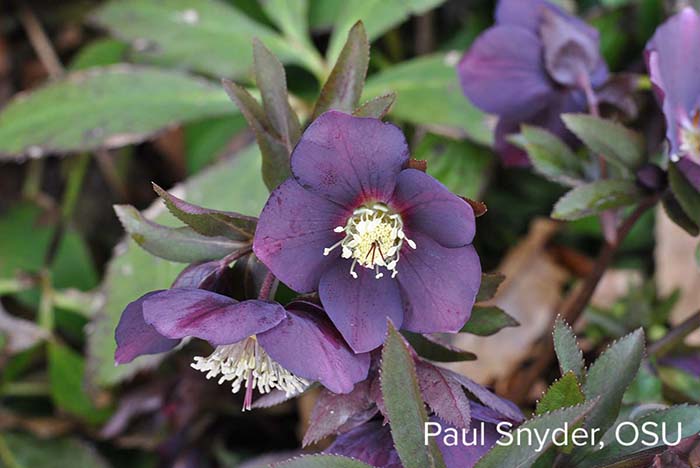 Hellebores are divided into two groups, those with stems (caulescent) and those without stems (acaulescent). Most of the plants in the nursery trade today are the acaulescent types, most notablyHelleborusxhybridusand several newer hybrids. These plants have flowers that emerge from the soil in late winter or early spring and provide a floral display for about eight weeks. Even after the foliage emerges the sepals retain much of their color and remain showy until finally bending to the ground in June. Most acaulescent types includingHelleborusxhybridus, mature around 12” tall and have dark green leathery leaves. The foliage is evergreen in nature, though it begins to brown in late winter. previous season's foliage of acaulescent types should be removed just as the flowers begin to emerge from the crown of the plant. The leaves act as a protectant for the flower buds, preventing them opening too early and being damaged by cold. 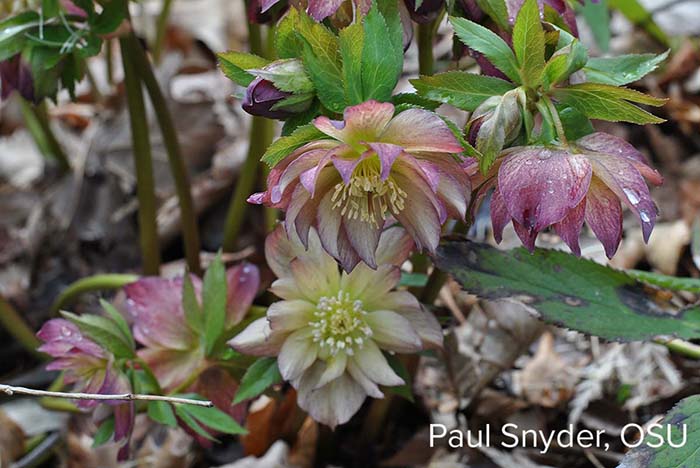 Plant breeders have been improving hybrids by selecting for plants that hold their flowers upright, and thus more visibly. New colors, patterns, speckles, foliage, and sepal numbers are being introduced to the trade constantly, contributing to excitement about this plant. Hellebores will self-seed in the garden but has never exhibited invasive tendencies. Seedlings should be removed if one desires to maintain the parent cultivar. 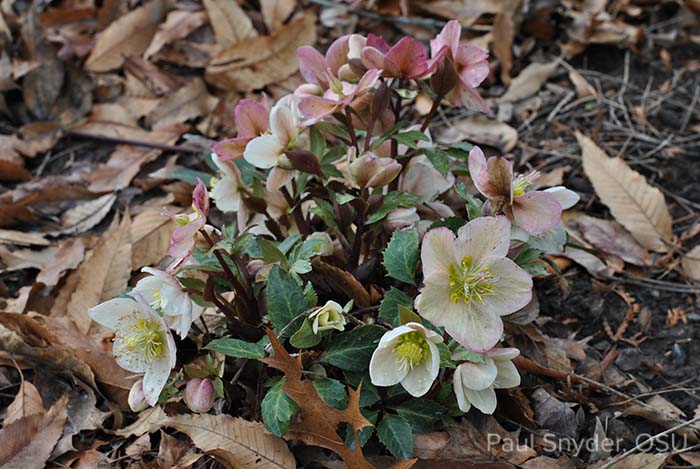 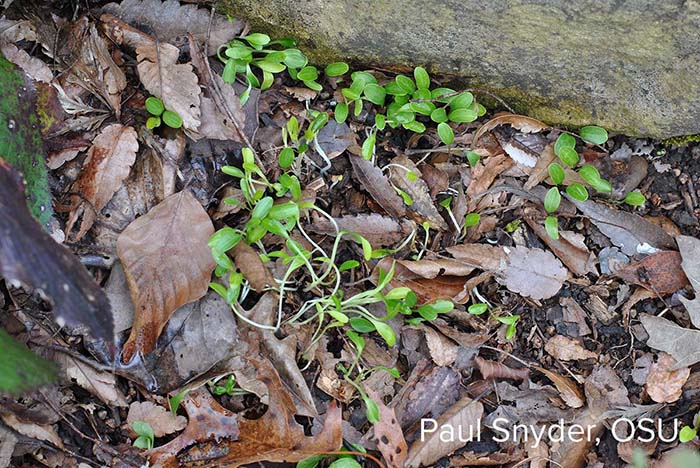 One caulescent species of Hellebore can be found at Secrest Arboretum (and other places in Ohio too), the stinking hellebore,Helleborus foetidus.The common name, stinking hellebore, might cause some to avoid this species. However, the fetid nature of the plant is faint, and one must place their nose directly in the flower or crush the foliage to experience the scent. Stinking hellebore reaches 16-20” tall and forms small clumps.Helleborus foetidusis less hardy thanH.xhybridusand has been killed to the ground at Secrest during the polar vortex of 2014-15. 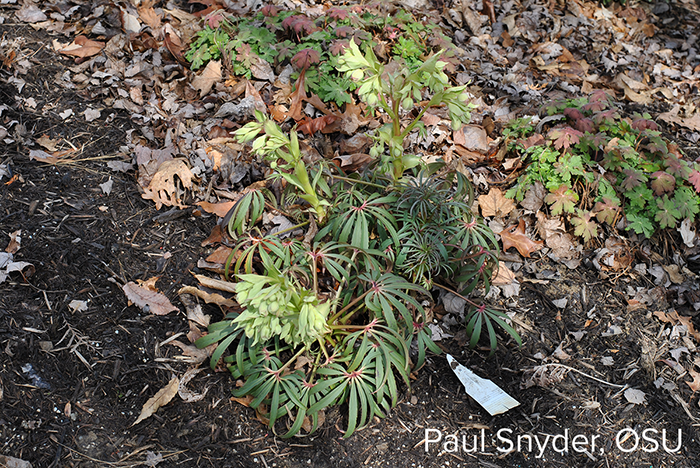 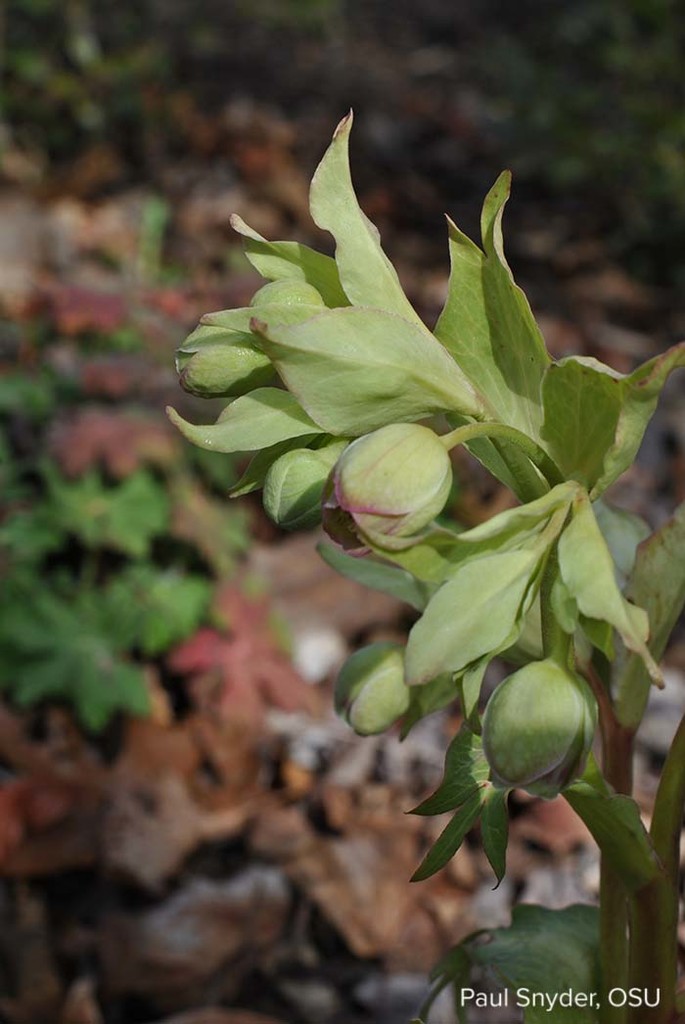 All parts of the Hellebores contain alkaloids making the plant poisonous. The poisonous nature contributes to Helleborus being deer and rabbit resistant, though human poisoning is rare in modernity. The plant was used in ancient times to poison people. One report by Greek geographer, Pausanias, states that statesman Solon ordered hellebore roots to be thrown into the water supplies of the towns he was going to besiege. The towns were overthrown because the residents were suffering from the effects of the poisoning.