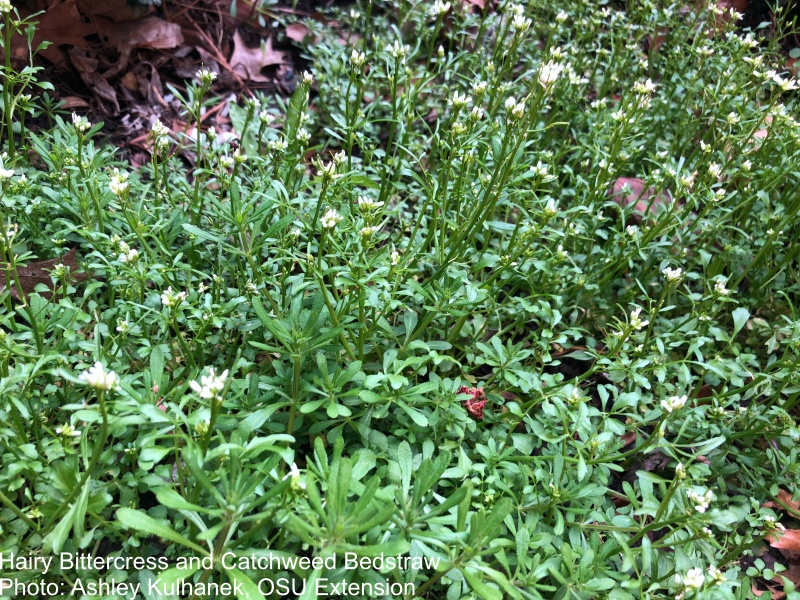 Let's take a closer look at Catchweed Bedstraw. Even though it is considered a weed, it happens to be one of my favorite plants because it has a fun little trick. (I know, "who has a favorite weed!") Often called, "Velcro®-weed", Catchweed is covered in short hairs that behave like tiny hooks allowing it to cling to other plants, surfaces, animal hair, and YOU. These hairs line the stems, leaves and eventually the seed pods. Other names it can go by include bedstraw, grip grass, and stickywilly.  It is a member of the Madder family (Rubiaceae).

One source noted that catchweed grown in full sun may have thicker hooks than that of plants grown in shade, making it more irritating to the skin when gardening and weeding by hand. 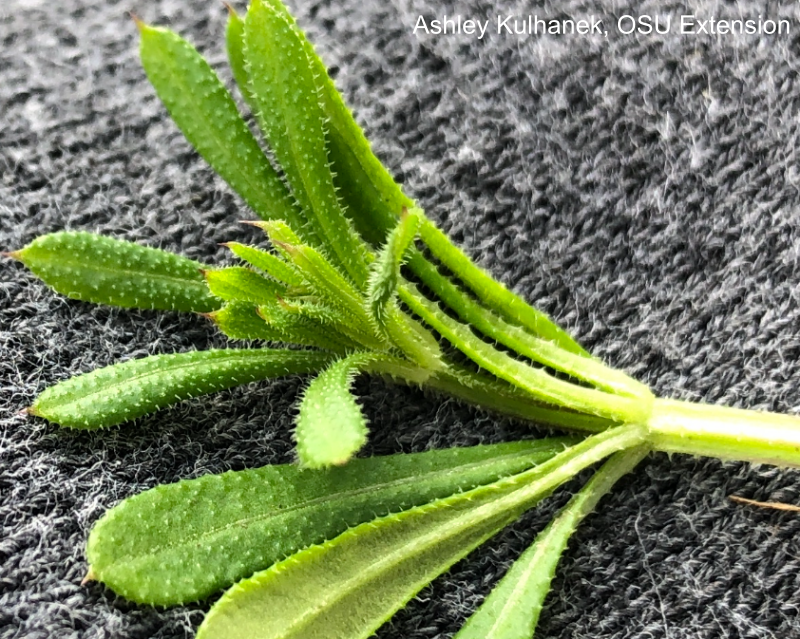 The fun is really this velcro characteristic. Need a game to play with the kids? Get some landscape weeding out of them while playing pin the "tail" on the donkey. It's great fun.  I find this is also a great test for identification too. 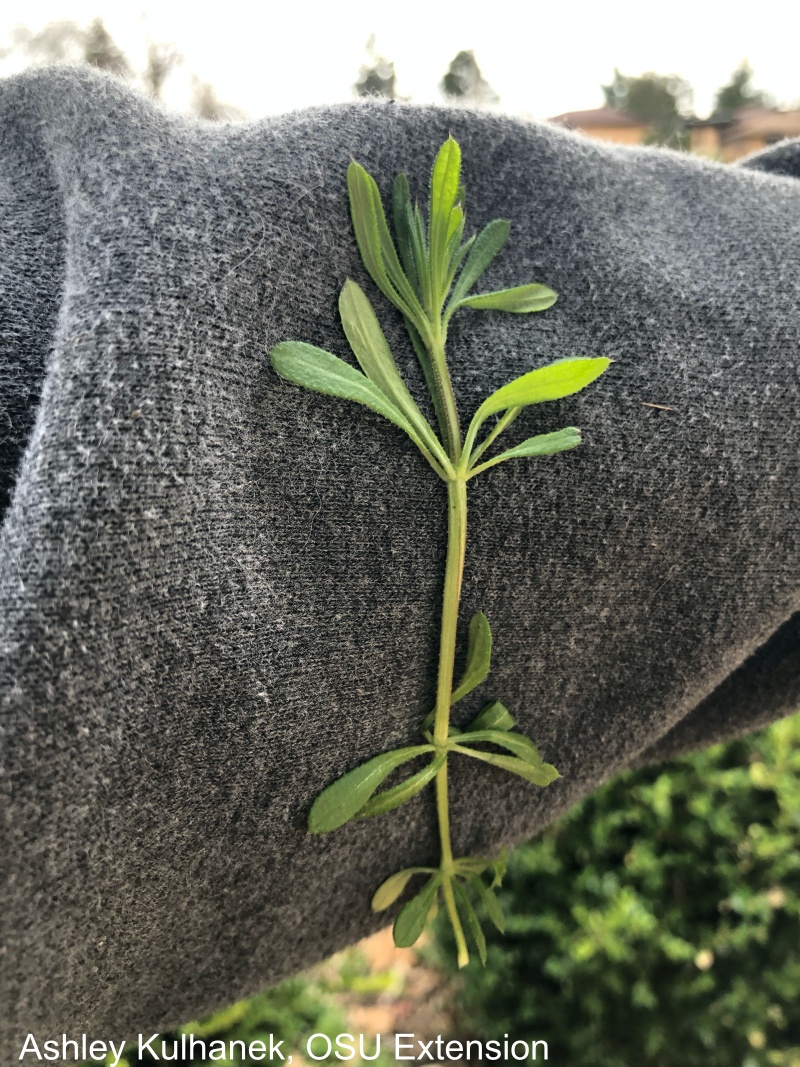 Identification is made easy also by catchweed's distinct appearance.  The simple lanceolate leaves 1-3” in length are arranged in a whorl of 6 to 8 leaves around a central square stem.  The stems can reach 3-6’ in length but can’t support themselves and will either spread over the ground or climb over other more desirable plant material. This also can make pulling the hand weed somewhat frustrating as the weak stems often snap off instead of pulling up the root. 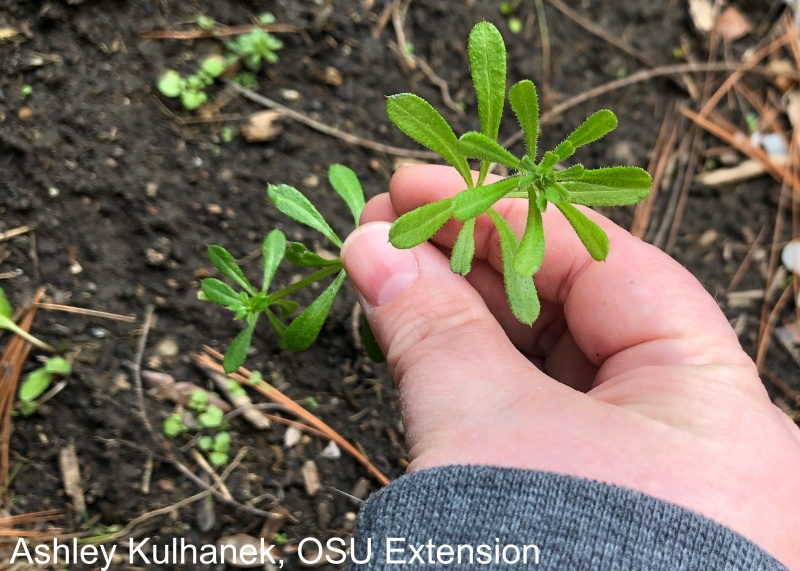 The plant produces small green to white flowers that are pollinated by flies or beetles. Spherical seed pods (the fruit) contain a single seed 1-4 mm in diameter. The hooked bristles on the pod create a burr, which help it disperse via animal fur or clothing. Individual plants produce 300-400 seeds. 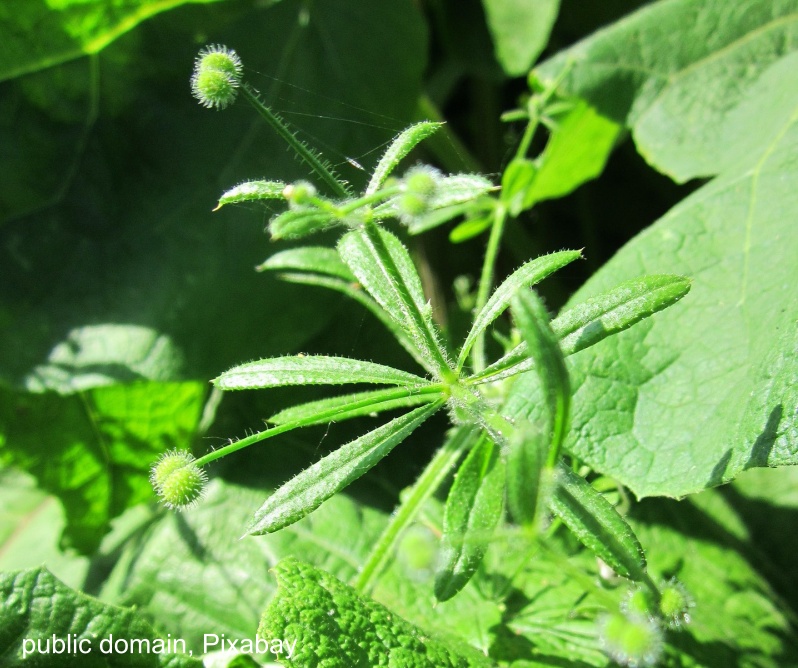 Flowers and therefore SEEDS will begin in late May into June, so NOW is a great time to get out and pull it before it gets too large and creates a tangled mess. As it grows it will stick to itself and topple over other plants, shading them out and creating a pretty tangled mess to weed through, so pull it now! It should be noted that some people with sensitive skin can have an allergic reaction to this plant causing red itchy rash on the skin which can last several days. You can protect yourself by wearing gloves and long sleeves when hunting down this plant.

Now onto Hairy bittercress. This weed has a cool trick too! Its seed pods EXPLODE when touched. A very effective seed dispersal mechanism. Now, unlike playing around sticking Catchweed to your shirt... you might not want to encourage those seeds exploding as they will become next year's problem!

Hairy bittercress is another winter annual weed and is a member of the Brassica family (Brassicaceae). . This flowering bittercress we are seeing NOW actually germinated last October and grew into a small basal rosette that hung out through winter. When spring conditions hit, bittercress resumes growth and flowers in early spring to set seeds for the next season. 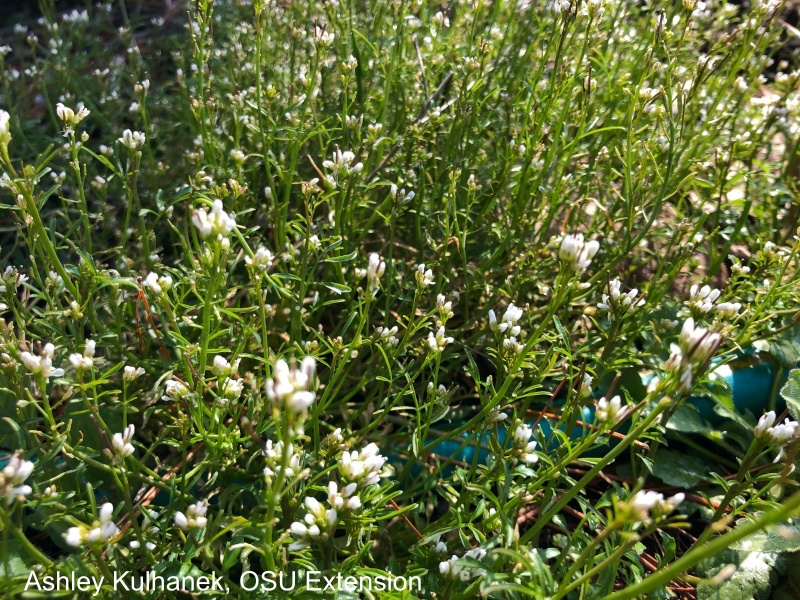 The plant has pinnately compound leaves with 4-8 leaflets on the rachis.  Hairy Bittercress flowers grow in clusters with each white flower having four tiny petals, a key identifier. (Hairy Bittercress is often confused with Common Chickweed, Cerastium arvense, another winter annual whose flowers have 5 white petals, "deeply lobed" giving the appearance of 10 petals.) 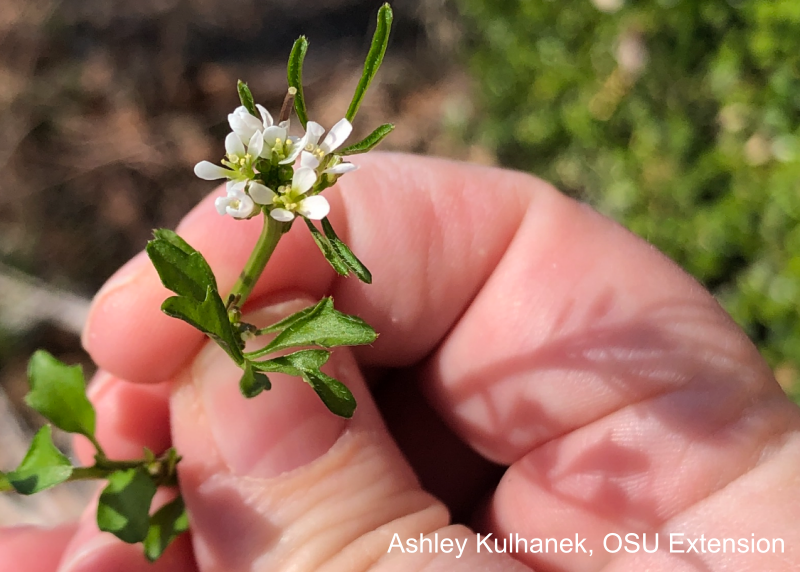 It takes only 14 to 28 days after flowering to develop the thin cylindrical seed pods known as SILIQUES.  These will stick up past the flower. As the fruit matures and turn brown, they will begin to explode to disperse their seeds with some reports stating that seeds can fly up to 15 feet. This gives rise to several other common names for this plant: Flick Weed and Shot Weed. Each silique can contain up to 20 seeds and a single plant can produce up to 5000 seeds over its lifetime with these seeds being viable for several years. 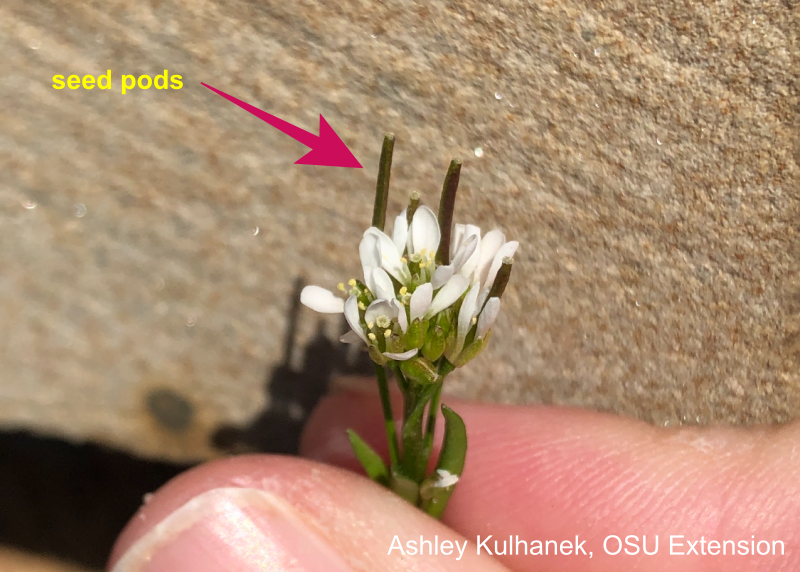 This plant is not without its virtues. It is edible and is reported to taste like arugula. So, while you are “weeding” you can be harvesting greens for dinner. Just be sure that the area has not been treated with any pesticides nor been visited by any critters, and that your identification is spot on. It is also a food source for two butterflies the spring azure (Celatrina landon)and the falcate orangetip (Anthocharis midea).

As winter annuals, both hairy bittercress and catchweed can be managed by preventing them going to seed through pulling, hoeing, or mowing. Chemical control is an option as well. For winter annuals, this is most efficacious if applied in summer-fall to prevent seeds from germinating. Catching them now when they are small and, hopefully, before they've spread, is the best option.

Remember: Pulled weeds left in the yard may continue to develop and produce seeds. Always dispose of weeds properly to ensure management. Use caution when adding plant material to your compost piles. Most home compost piles do not reach a high enough temperature to destroy weed seeds. Using the finished compost could then result in the dispersal of weed seeds that were not adequately heated to kill them off.