Human pathogens include microorganisms such as bacteria, fungi, and unicellular protists such as thePlasmodiumspecies that cause malaria. Viruses are an outlier of a pathogen, since most biologists do not consider them to be living organisms. Plant pathogens include certain fungi, oomycetes, bacteria, nematodes, protists such as the club-root pathogen of crucifers, and even parasitic plants, such as dwarf mistletoe and dodder.

The first documented usage of the word “pathogen”, at least according to several sources I checked, was in 1880. a historical note of interest to us right now, is that much of what we know now was just developing then: e.g. the H1N1 virus that is the pathogen for the “Spanish” flu was particularly hard to understand in 1917-1919.

At that time no-one was able to visualize viruses, as electron microscopes did not exist for these tiny substances. Viruses had not yet been crystallized. The structure of the DNA and RNA of viruses (surrounded by a protein coat) was not known. More on this later. For now, let us take a brief look at some familiar and not so familiar animal and plant diseases and what type of pathogens are involved in these diseases. Let’s put or current crisis to educational use. See also:

YOUR HUMAN DISEASE PATHOGEN QUIZ FOR TODAY: For how many of these diseases did you know the types of pathogens involved?

Disease – Chickenpox and Shingles. Pathogen – Virus: Varicella-roster virus. On a personal note, I am just short of five years in from a shingles breakout in my trigeminal nerve and just now off finally finishing my medication treatment. My thoughts: Strongly consider, with your doctor, the shingles vaccine.

Disease – Bubonic Plague. Pathogen - Bacterium:Yersinia pestis.Vectors: Here is a case where there are intermediate vectors involved in the disease. With the plague, it was rodents that harbored the virus that were then fed on by fleas that then transmitted the virus to humans.

Disease – Malaria. Pathogen - Unicellular eukaryotes (Protista). Plasmodium falciparumand otherPlasmodiumspp. Vectors: Another case where other organisms were involved; in this case, certain species of mosquitoes in the genusAnopheles.

Disease – Meningitis. Pathogens - The type and the pathogenesis depends upon the type of pathogen that attacks the meninges (membranes that surround the brain and spinal cord); thus there is the particularly serious bacterial meningitis (treatable with antibiotics) and viral meningitis, which since viruses are not living are not controlled directly by antibiotics.

There are also fungal infections of humans that come into play with compromised immune systems, such as when drugs are used to suppress the immune system and with diseases such as AIDS (Acquired ImmunoDeficiency Syndrome, caused by the Human Immunodeficiency Virus HIV).

There are of course many more examples:

Viral diseases including the common cold caused by coronaviruses and other viruses to the viruses that causes yellow fever, polio, and rabies.

And on and on, “Nature red in tooth and claw”, and a reminder that disease is, though certainly something we think of as an aberration, truly natural.

And now, for your PLANT DISEASE QUIZ FOR TODAY, starting with the first virus ever fully identified. 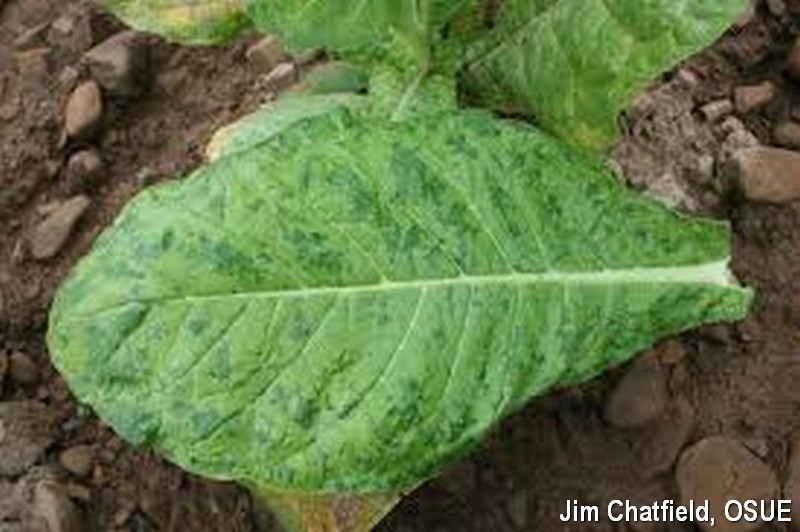 Disease: Tobacco Mosaic. Pathogen – Virus. A Tobamovirus: TMV, causes a mosaic pattern on leaves of tobacco, with decline of plants and serious economic losses, and other plants in the Solanaceae (nightshade family) and other host plants. Unlike many plant viruses, that are vectored by aphids and nematodes, TMV is mechanically transmitted via worker’s hands, tools, clothing, and even tobacco products. Thus, horticulturists working in tomato and ornamental plant greenhouses were often consideredpersona non grataif they were smokers.

TMV was shown to be infectious in 1892 (by Dmitry Ivanovsky) as a substance that passed through tiny filter pores remained infectious to tobacco plants, even though the filters would not allow bacteria to pass. In 1908, Martinus Beijerinck called the substance a “virus”, and the study of virology was born.

No one could visualize this substance though, even with the most powerful light microscopes. Then Windell Meredith Stanley was the first to crystallize a virus - TMV – in 1935, and for this and other work he shared a Nobel Prize in Chemistry in 1946. He thought the virus was pure protein, which later proved not to the case: viruses consist of RNA or DNA with a protein coat.

But hey, give him a break, though DNA was synthesized back in the 1860s by Friedrich Miescher, its double helix structure was not elucidated by Watson and Crick until 1953. And the visualization of viruses did not occur until 1939 when Ernst Ruska and Max Knoll, using the new electron microscope Ruska developed for this PhD thesis (not bad!), used it to visualize TMV particles.

So Stanley stood on the shoulders of giants, but as is the case for all scientists, other giants extended their part of the ever-improving, constantly changing understanding of nature, the goal of science.

By the way, coronaviruses are spherical, with club-shaped spikes on the surface, and the size of each particle is within a range, but in one paper describing virus particles from a Korean patient early in the epidemic (which became a pandemic) the size of SARS-CoV-2 was reported as 70-90 nm. So again, tiny, as in .000000070-.000000090 meters in size. 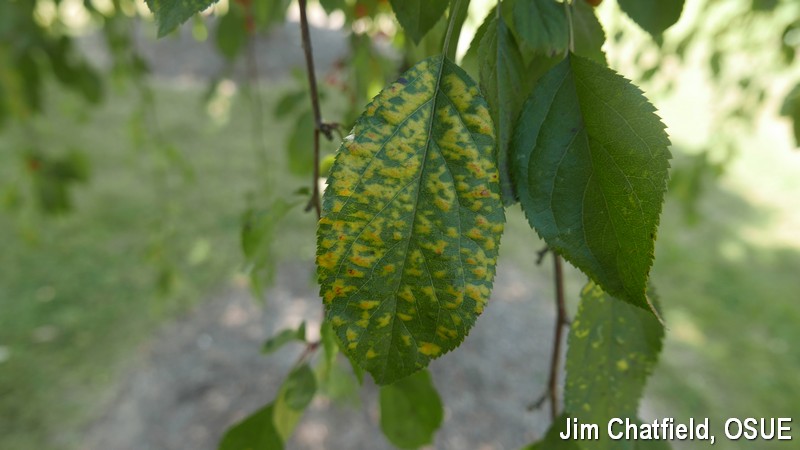 Now we are really getting serious. Virus symptoms on crabapple! Just kidding - there are - possibly - more important things in life

Disease: Impatiens Necrotic Spot Virus Disease. Pathogen – INSV. This is a case where the host range of the disease is very wide, hundreds of host plants, from peppers to peppermint. This was a major disease for years, requiring in some cases destruction of entire greenhouses full of plants. Western flower thrips insect is a vector. One of the diagnostic dilemmas of this disease is the range of symptoms: from discolored spots to leaf curling, from stunting to stem dieback. There were many plants with no visible symptoms that were carriers and yet causing damage, such as subtle stunting, making management a major problem for the green industry. 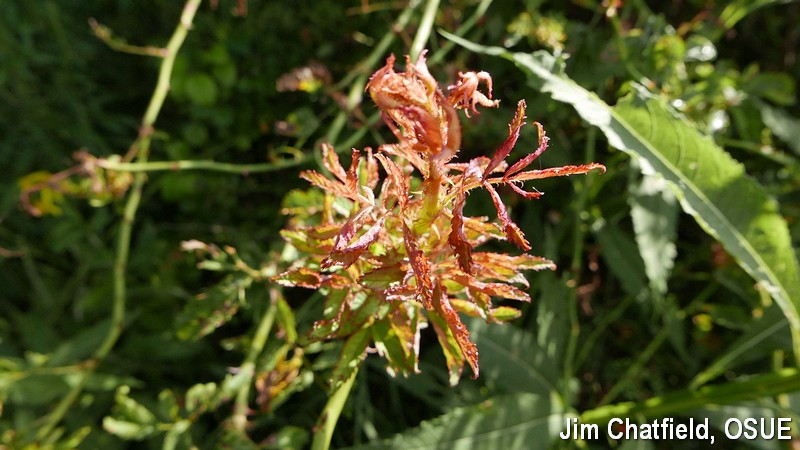 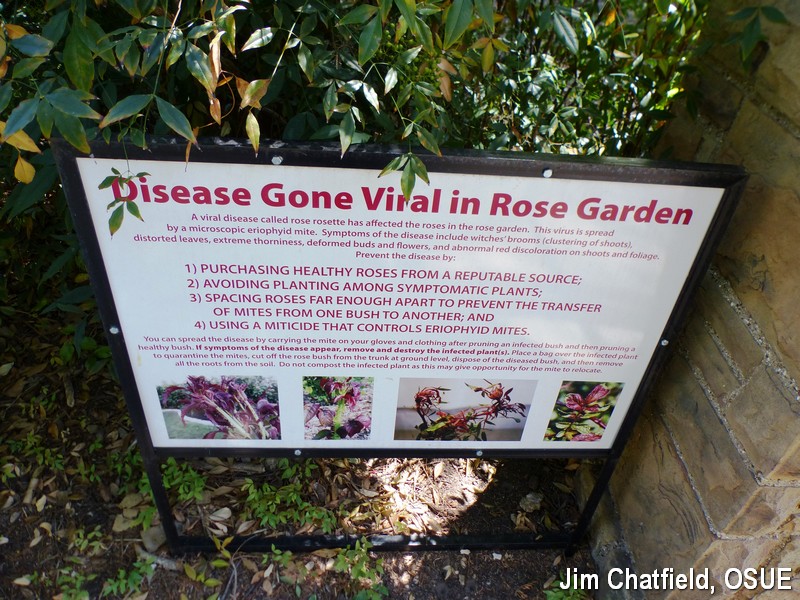 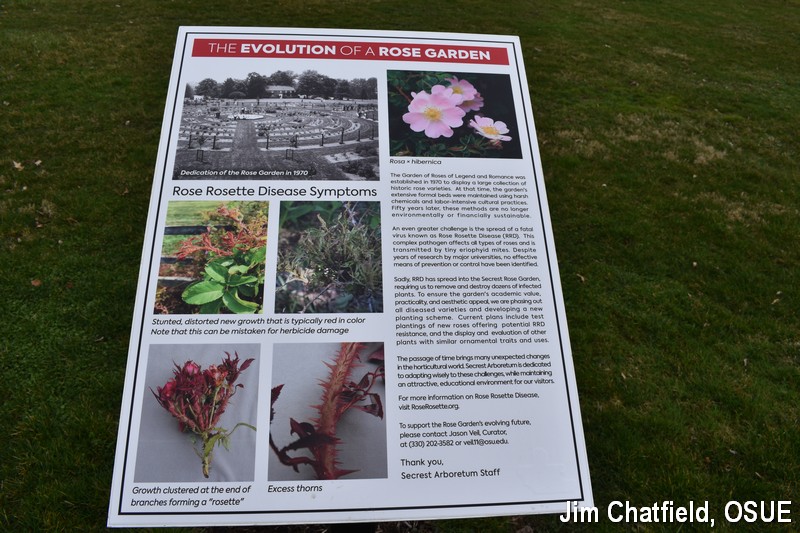 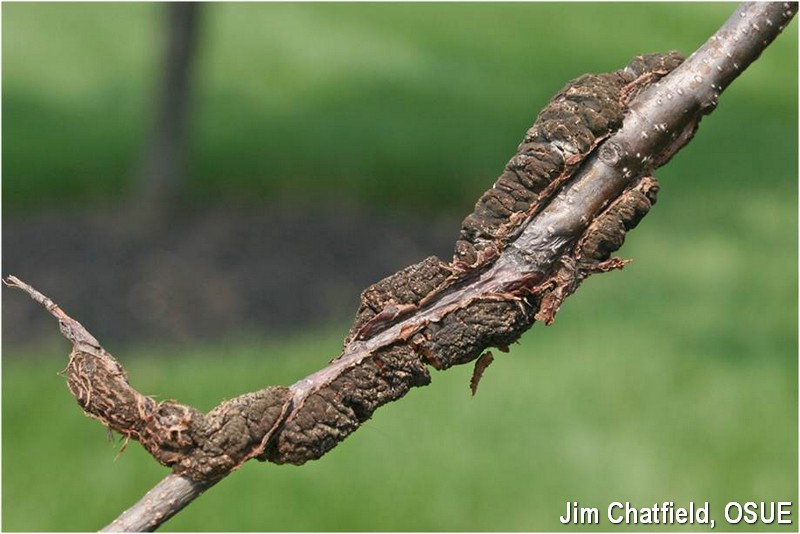 Disease: Late blight of potato. Pathogen - Oomycete (Phytophthora infestans). This is one of the most important historical, and still ongoing, plant diseases. When it became epidemic in Europe and the British Isles in the mid to late 1840s, the germ theory of disease had not been elucidated; Pasteur and Koch’s germ theories were decades to come. 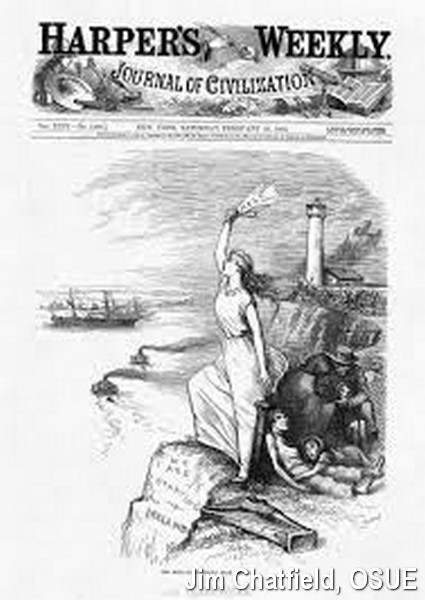 Actually not my drawing. From Google

It was a puzzle at first as to whether the fungal-like growth on the dying foliage and the rotting tubers was saprophytic (living on dead organic matter) and thus an effect, or parasitic (feeding on living organic matter, and thus the cause of the problem. 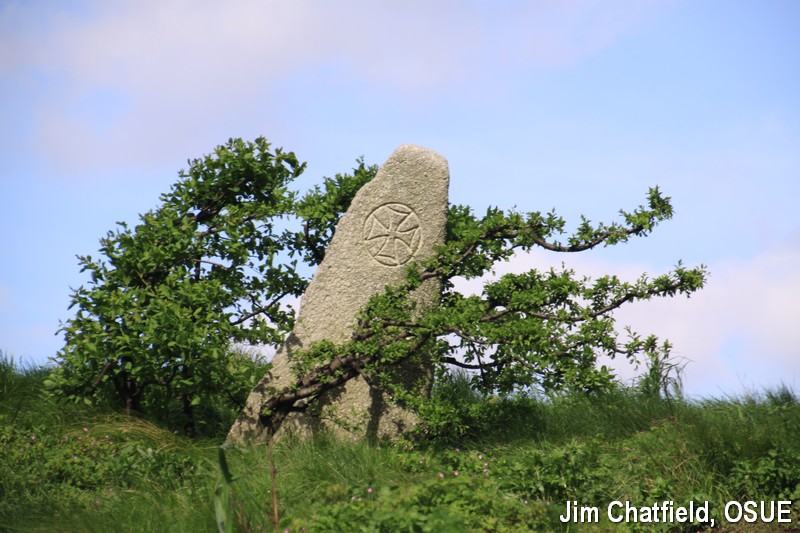 This I did take. At the very meaningful Irish Hunger Garden in Manhattan. If you visit you will see that the Statue of Liberty is off to the south. At the entrance to the Garden are panels from Advance of the Fungi

The contemporary dilemma during the outbreaks of this disease is encapsulated from reports of what became known as one of the causes (along with a broken tenant farmer system in Ireland) of the Irish Potato Famine. These contemporary reports inThe Gardener’s Chronicleand theAgricultural Gazette in 1845 are fascinating.

“ ‘A fatal malady has broken out amongst the potato crop. On all sides we hear of the destruction. In Belgium the fields are said to have been completely desolated. There is hardly a sound sample in Covent Garden Market.’ So began the first warning of a calamity, in the editorial columns ofThe Gardeners’ Chronicle and Agricultural Gazette,on August 23rd, 1845.”

“Nothing was known of the course that the disease would take; the potatoes were rotting in the ground--not everywhere, but in a pestilence so universal why should any be spared? It was suggested that the rot might be caused by static electricity--generated in the atmosphere by the issuing puffs of smoke and steam from the hundreds of railway locomotives that had recently come into use, and for all that was surely known it might equally well be due, as others supposed, to mortiferous vapours or ‘miasmas’ rising from blind volcanoes in the interior of the earth.

They were at a great disadvantage then. Now we know about infectious disease, and pathogens, yet still we need to relearn many of the lessons when disease comes to call. 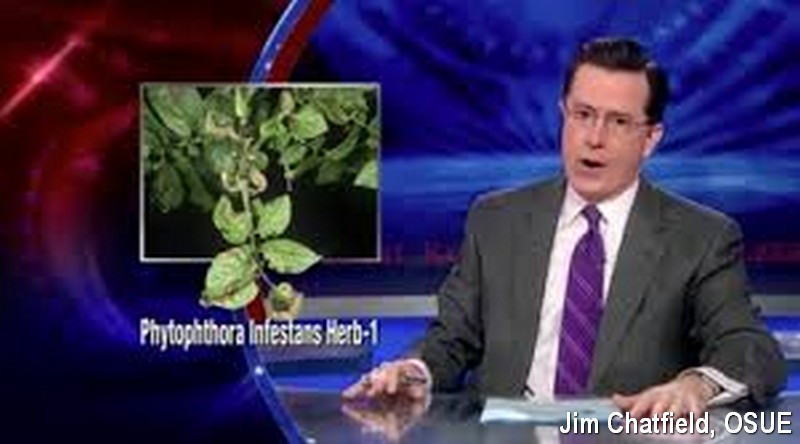 even Stephen Colbert gets into phytopathological education. Again a Google photo 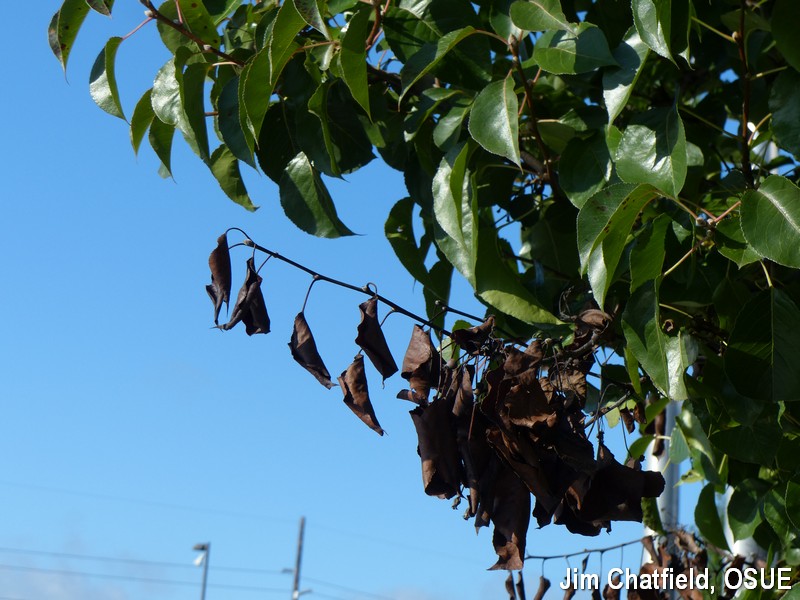 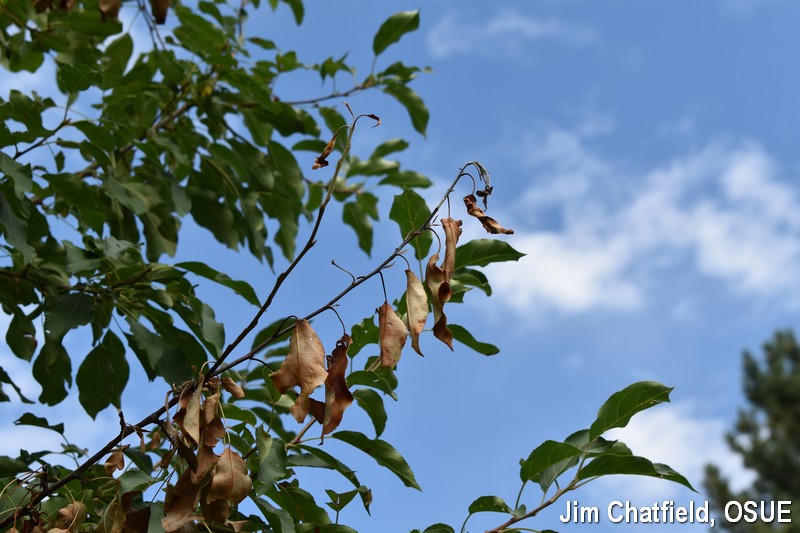 Now its getting serious. Fireblight on crabapple

Disease: Crown gall of stone fruits and many other hosts. Pathogen: - Bacterium:Agrobacterium tumefaciens. 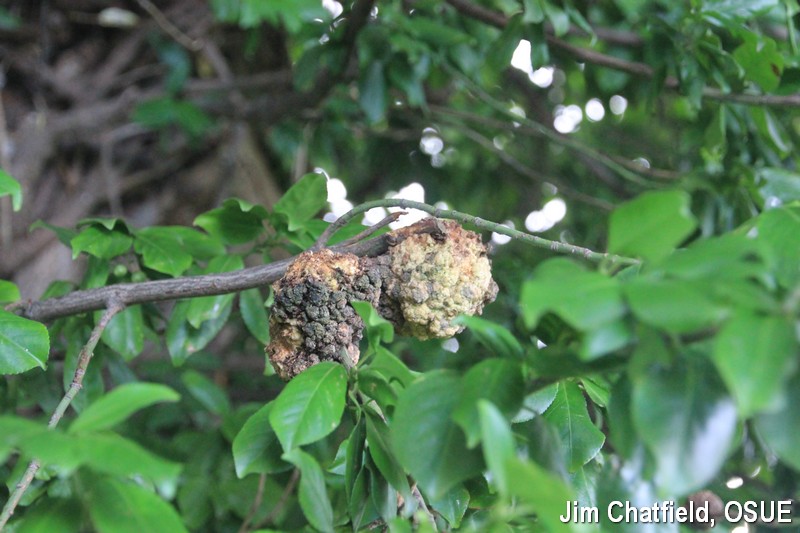 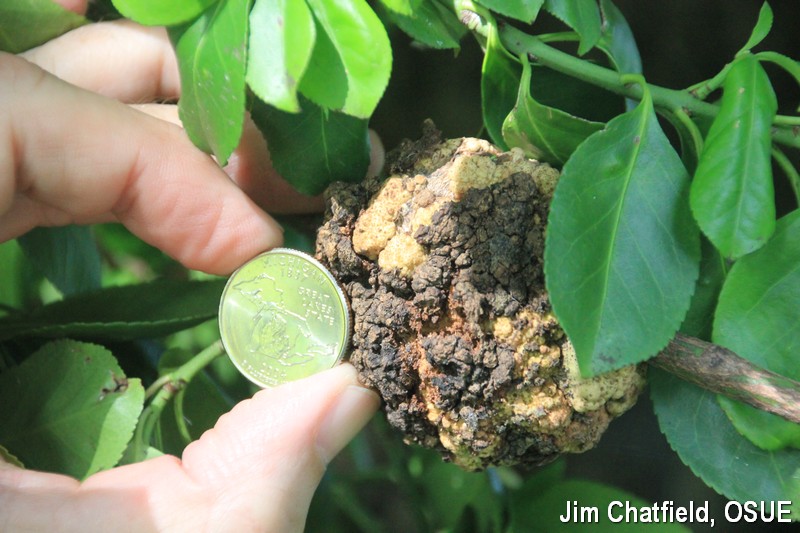 Crown galls may be quite large

Disease: Elm yellows/Elm Phloem Necrosis. Pathogen – Bacterium (classified previously as a Mycoplasma-Like Organism, then as a Phytoplasma, currently as a wall-less bacterium). Elm yellows bacterium is vectored by leafhopper insects. This disease is thought by many to be as serious over the years in certain parts of the country as Dutch elm disease. 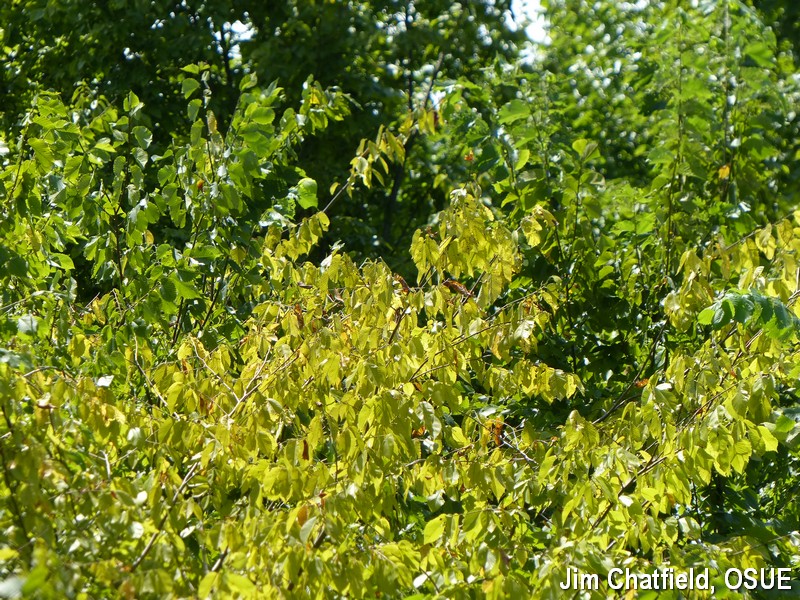 Yellowed leaves from elm yellows. The pathogen is in the phloem, so tree health goes downhill from here.

Disease: Club root of cabbage and other crucifers. Pathogen – Phytomyxea, a Protist group:Plasmodiophora brassicae. Once classified as a slime mold. The most evocative name, though, for this disease with contorted roots is the older name of - cabbage hernia.

Better yet is the saying by plant pathologist Antonin Woronin, speaking in the late 1800s of the lack of controls for the disease, other than the burning of infected plant debris at the end of the harvest: “The only cure for cabbage hernia is - Fire!”.What a saying, although from personal experience I do not recommend yelling this at the top of your lungs when teaching a plant pathology class in a crowded building.” With that final word, people came a ‘runnin’.

Disease: Dwarf mistletoe. Pathogen – Parasitic plant.Arceuthobium species. This true parasitic plant with virtually no capability of producing its own food, differs from our eastern half-parasites, the true mistletoes (nativePhorodendronspp. And non-nativeViscumspp.), that have both green leaves and send suckers down into plant tissue for nutrition. 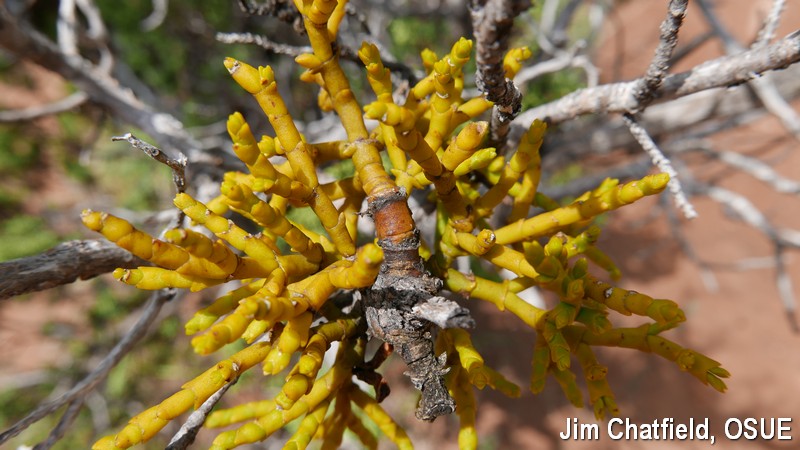 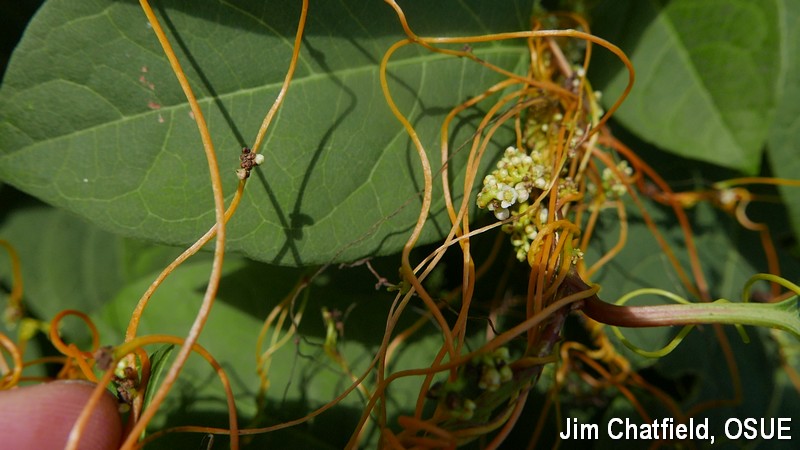 So, at long last the end of this article, though not of human or plant diseases. Let us close with a quote from the phytopathological end of the equation, demanding the need for integratedplant health management, for the importance of a complex understanding of the problem.

A plea for considering all avenues of management, in the case of plant diseases, for more than just the spraying of fungicides.   (see:https://bygl.osu.edu/node/949. “Disease Demystified”.)

[The control of plant disease] ”must be more than squirt gun botany.” – J.C. Arthur. 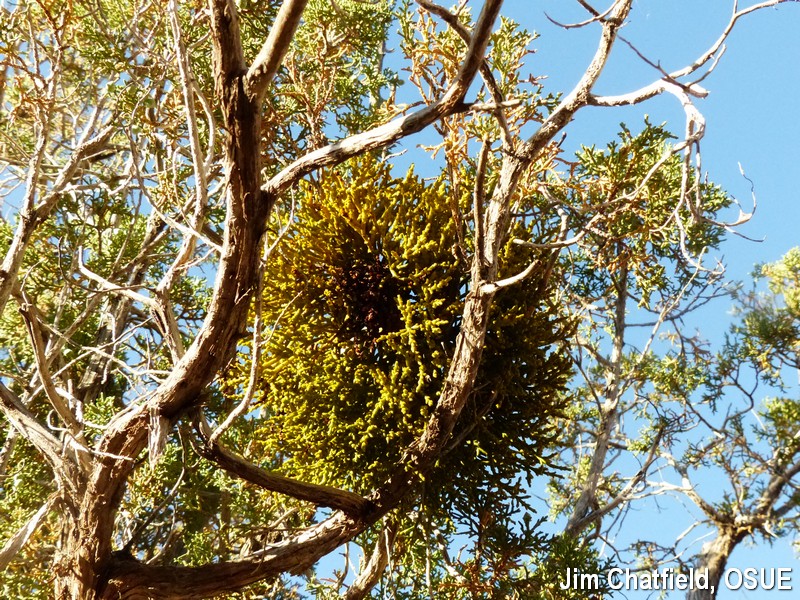 Oh, one last image: another dwarf mistletoe. This time from Arizona! Nature is ever inventive. 24/7.