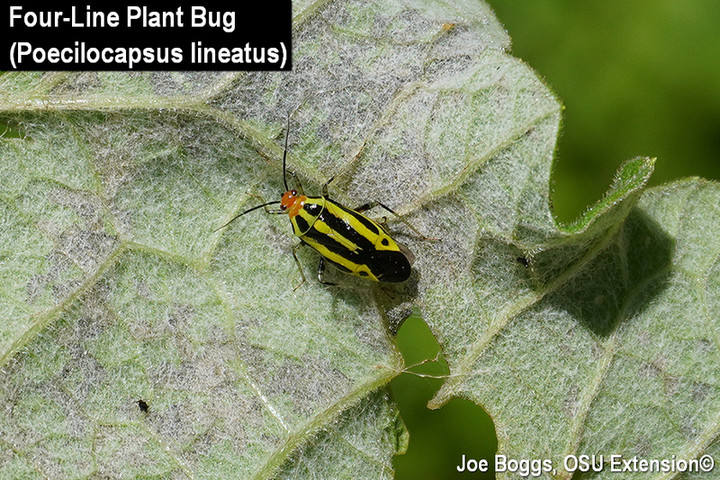 Four-Lined Plant Bugs (Poecilocapsus lineatus, family Hemiptera) are one of the sneakiest, quickest hitting spring pests found in Ohio. Hordes of hungry bugs descend seemingly out of nowhere to cause extensive leaf damage, then they just fade away leaving behind their foliar wreckage.

The native plant bugs have one generation per season and their development from eggs to adults occurs over just a few weeks in the spring. Winter is spent as eggs deposited in vertical slits around 2 – 3" long created by the females in their host plant stems. 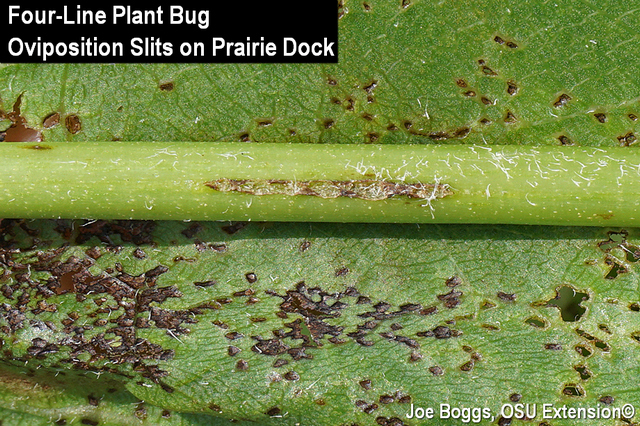 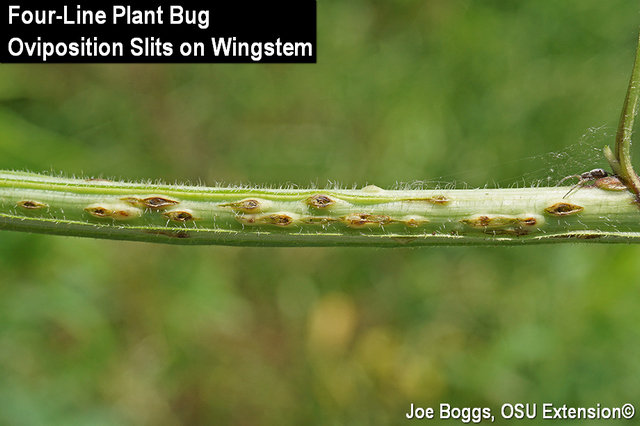 Both the adults and nymphs are heavy feeders. However, the nymphs produce the most significant damage because they feed over a longer period as they develop through five instar stages. The bugs are finished with their development for the season in Southwest Ohio; however, they are no doubt still wreaking havoc in the northern part of the state. 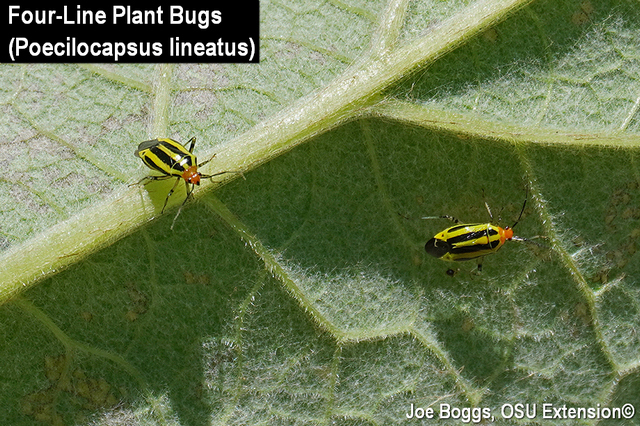 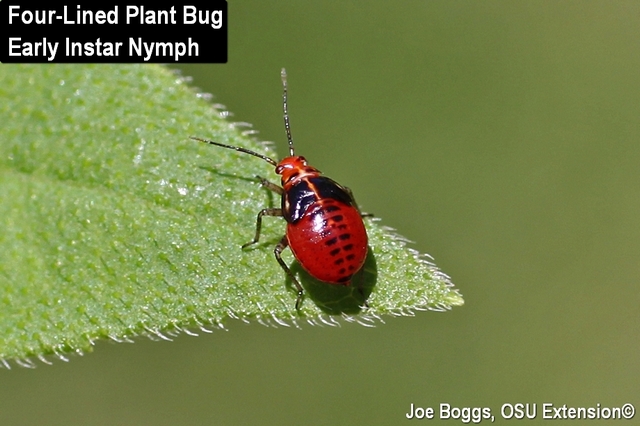 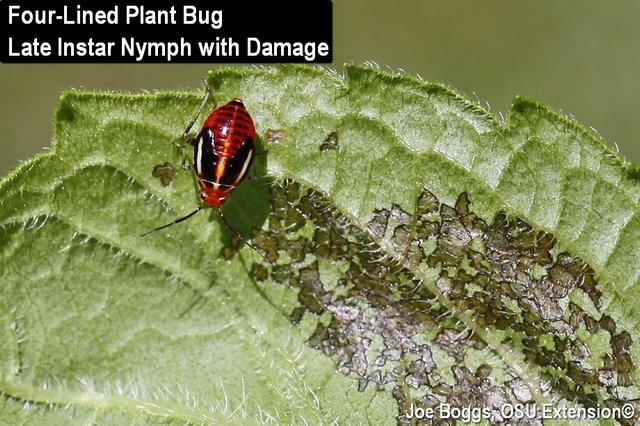 Like many plant-feeding hemipterans, the bugs inject enzymes into the plant to cause cells to collapse. They then feed on the resulting "cell slurry." The damage appears as small, round, black sunken spots that may coalesce into extensive blackened areas on infested leaves. The symptoms are commonly mistaken for a plant leaf disease. 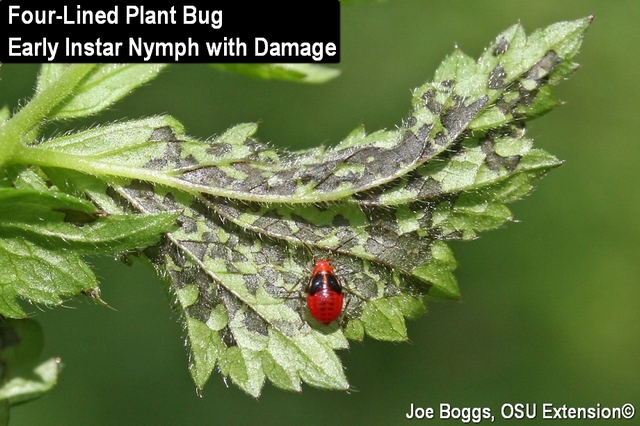 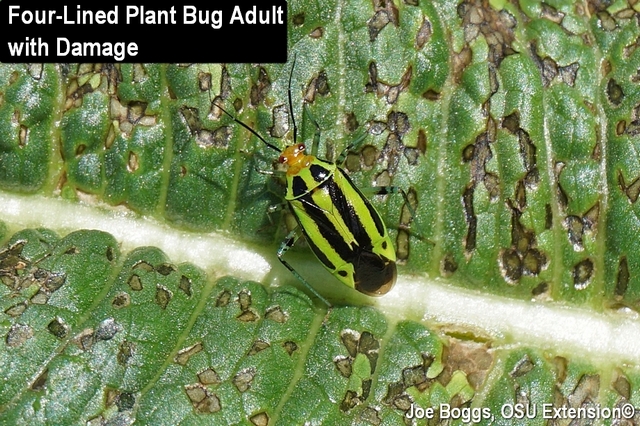 This sucking insect feeds on over 250 plant species including woody ornamentals and herbaceous perennials. They have a particular affinity for herbs, especially members of the mint family (Lamiaceae), and high populations can produce significant plant injury. The bugs can also damage many annual vegetables; however, we seldom see significant injury in Ohio because the bugs are gone by the time plants in vegetable gardens truly get up and running. 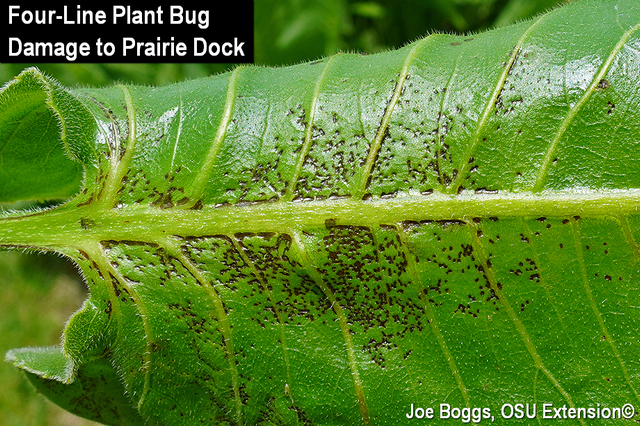 One of the most effective management options in perennial herb gardens as well as landscape plantings of annuals and perennials is to closely inspect plants for oviposition scars later this season. Stems that show oviposition scars should be cut and destroyed to eliminate eggs.

Weed management is another important step in reducing localized four-lined plant bug populations. For example, I consistently see some of the heaviest damage on Teasel (Dipsacusspp.). The preference for these non-native weeds is so strong; I use the teasels to monitor localized four-lined plant bug population densities. Mowing to destroy teasel or other weeds showing feeding symptoms will eliminate them as repositories of bug eggs that will hatch next season. 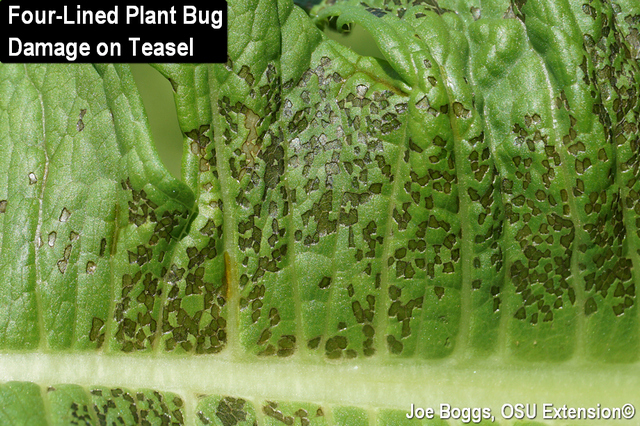 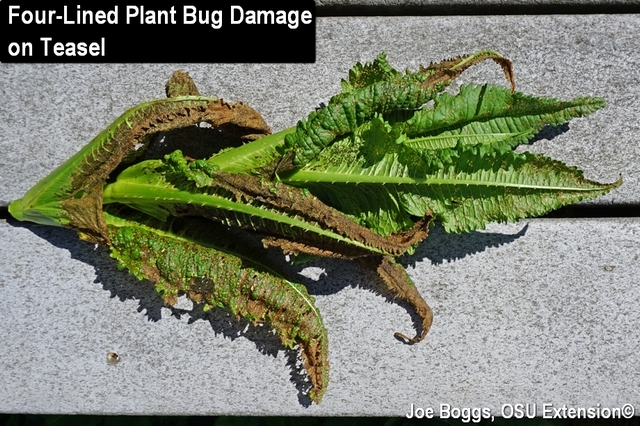 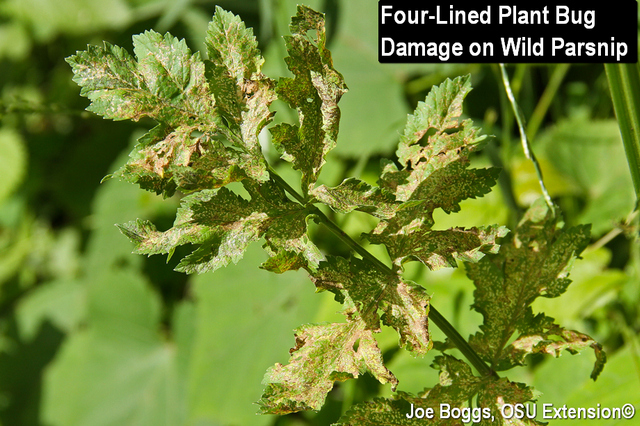