This is the time of the season when a range of plant growths produced under the influence of eriophyid mites (family Eriophyidae) become obvious on a wide range of trees and shrubs in Ohio. They appear in widely varying forms from bladder-like to spindle-like to felt-like to crinkled leaf edges and other unusual leaf deformities. 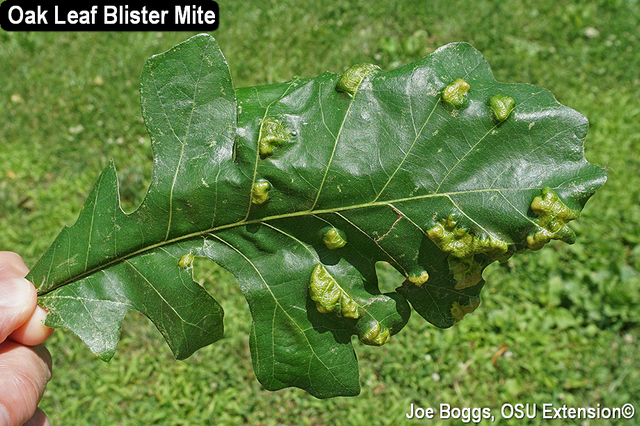 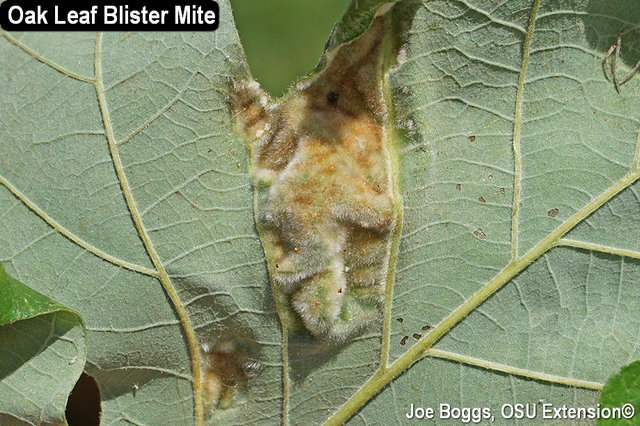 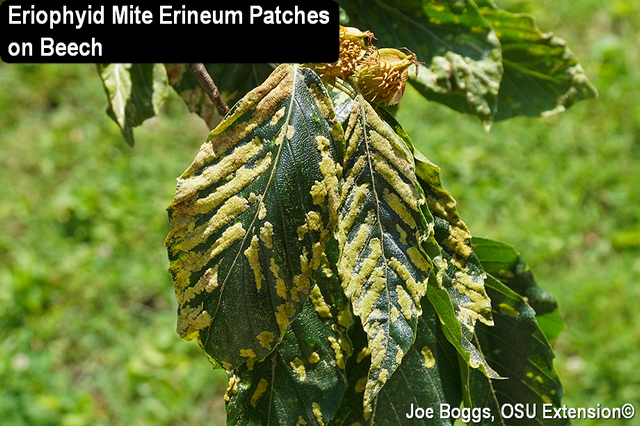 You can read more about these mites and see more pictures of their handiwork by clicking on these hotlinks:

One of the most obvious erineum patches found on any tree is the garish neon pink patches produced on the upper leaf surface of sugar maples (Acer saccharum) by the miteEriophyes elongates. The more subtle silvery-green erineum patches produced byE. modestusmay be found on the lower leaf surface of sugar maples. The patches become more evident later in the season when they turn rusty-red. I've occasionally found the handiwork of both mites on the same leaves. 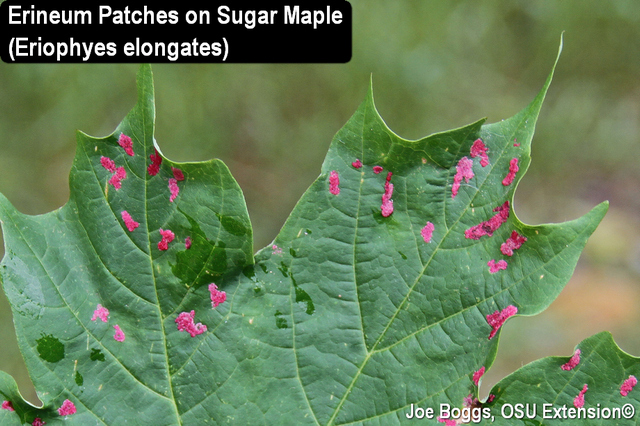 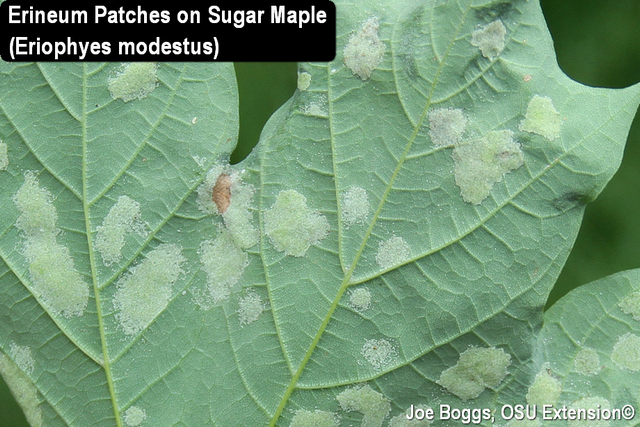 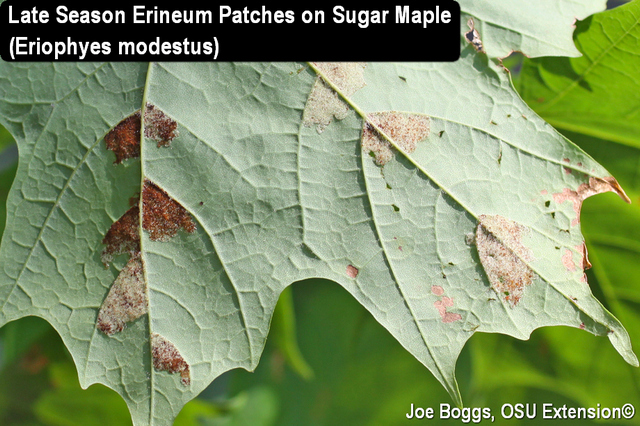 One of the most notorious eriophyid plant galls is the wart-like galls that rise on the upper leaf surfaces of silver maple (A. saccharinum) and red maple (A. rubrum). The galls are produced by the maple bladdergall mite,Vasates quadripedes. These galls are currently "maturing" meaning they are changing from green to deep red with a few turning black. 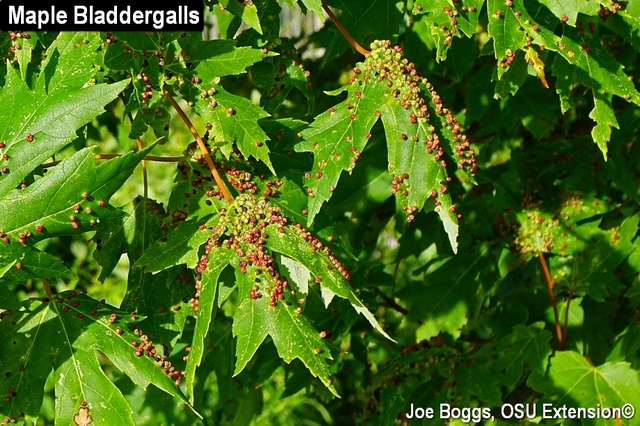 The equally common maple spindle (or nail) galls are produced by a different eriophyid mite,V. aceriscrumena, and may be found on the upper leaf surfaces of silver, sugar, and red maples as well as Norway maple (A. platanoides). Flipping gall-festooned leaves over will reveal the mite's exit strategy in the form of puckered pits on the lower leaf surface. 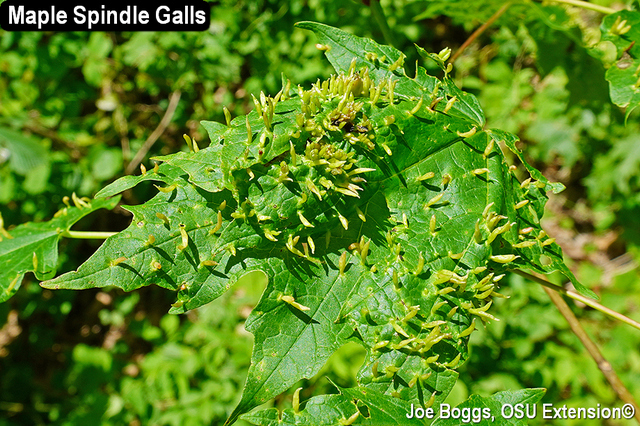 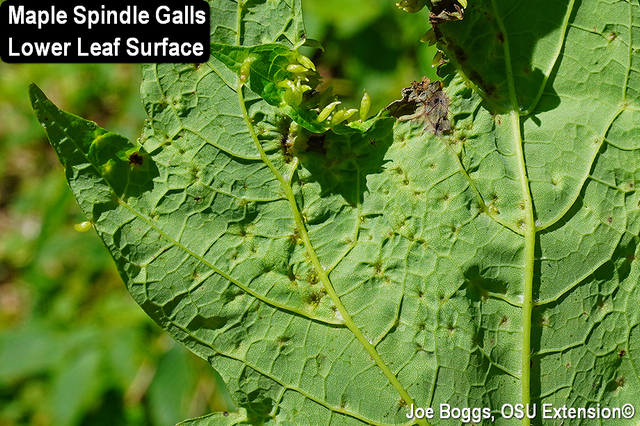 Spindle galls on linden (Tiliaspp.) are sometimes called "nail galls." They are produced by the mite,E. tiliae. 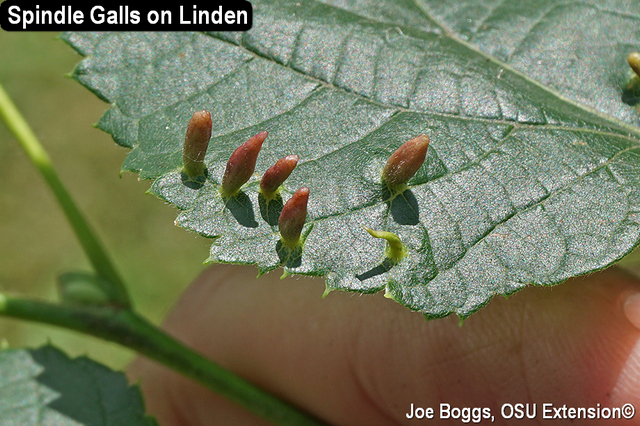 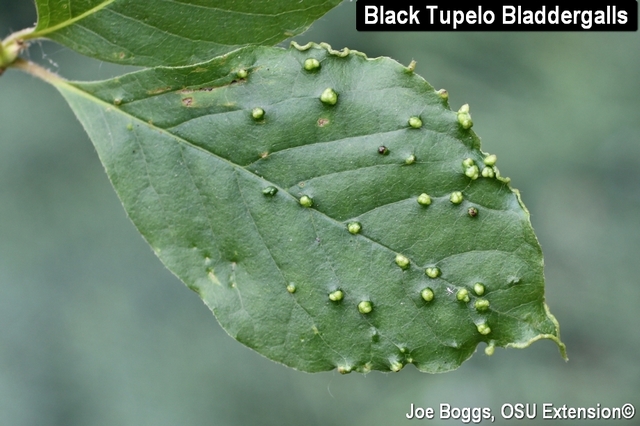 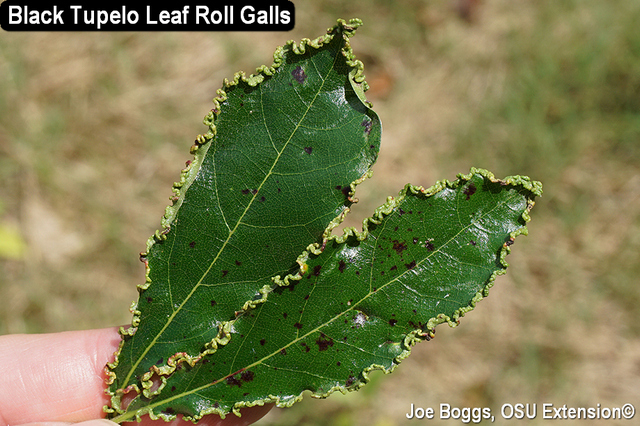 The bead-like bladdergalls produces byAculops tetanothrixon black willow (Salix nigra) seem to be on the rise over the past few years in southwest Ohio. I once considered them to be an oddity but now frequently find heavily galled willows used for streambank erosion control. 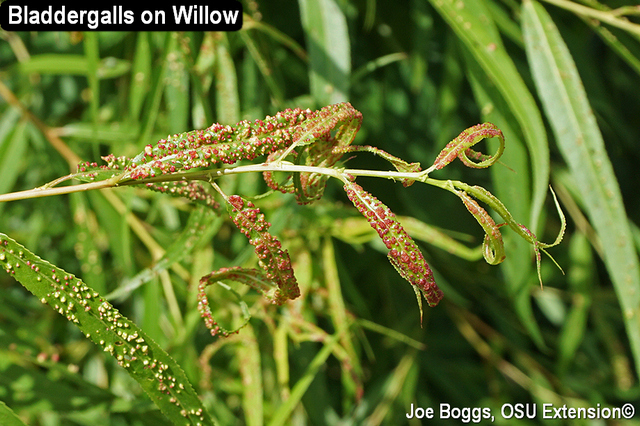 One of my favorite plant galls is produced on poison ivy (Toxicodendron radicans) by the eriophyid miteAculops rhois(=A. toxicophagus)). The bladdergalls vaguely resemble the itchy skin blisters we suffer when we contact urushiol exuded by the plant. I like to imagine that gall-infested poison ivy plants suffer the same agonizing itch, but they have no fingers! 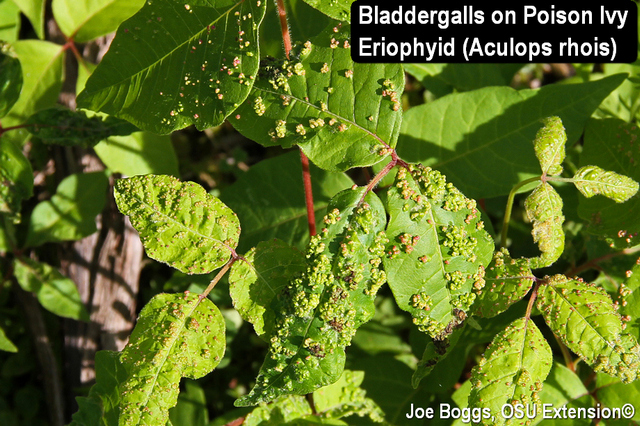 Interestingly, the same eriophyid gall-maker also produces bladder galls on fragrant sumac (Rhus aromatic) which makes sense given that sumacs and poison ivy belong to the cashew family,Anacardiaceae. Of course, it made even more sense when poison ivy was included in theRhusgenus. Perhaps plant taxonomists should pay heed to the mite. 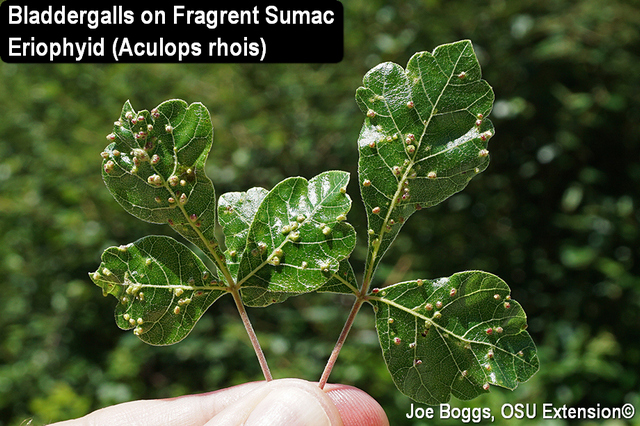 Boxelder (A. negundo) challenges the poison ivy maxim, "leaves of three, let it be," and the handiwork of the miteE. negundifurther complicates the issue. The eriophyid produces bladdergalls and early in their development, they resemble those on the three leaflets of poison ivy. 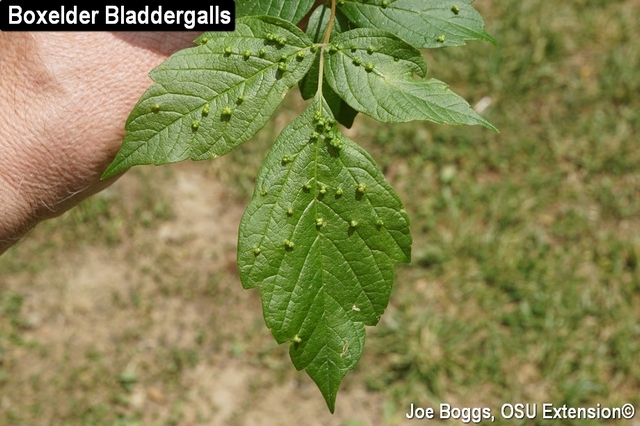 The boxelder bladdergalls undergo a distinctive change in appearance as they "mature." They transform from small, green bladdergalls to large wart-like protrusions with velvet-like patches on the corresponding lower leaf surface. They are sometimes referred to by the name of "boxelder velvet galls." I originally thought bladder and velvet galls were the work of two different gall-makers, but the literature attributes both types of galls to the same eriophyid mite. 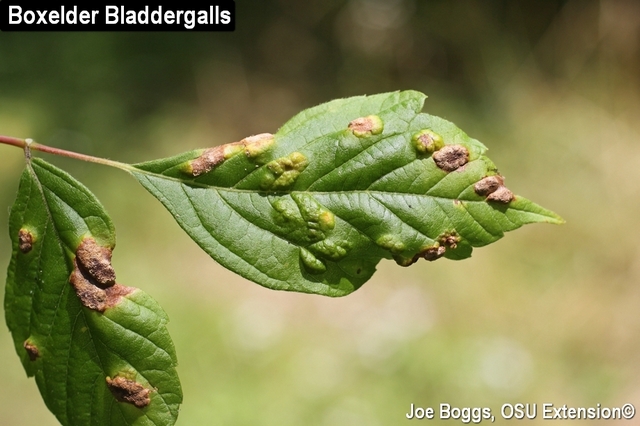 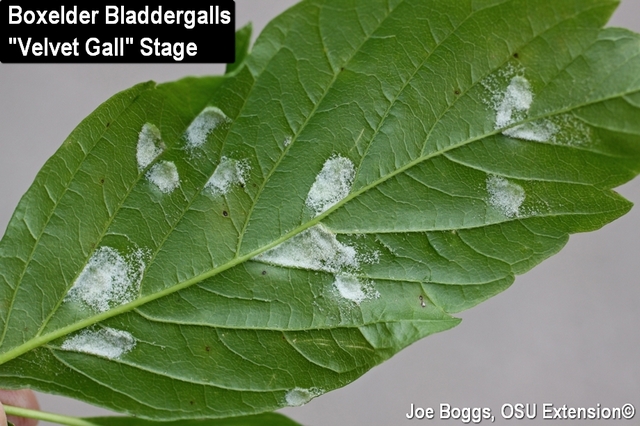 Galls produced by the eriophyidE. brachytarsusare another type of bladdergall that changes form as they mature. At first, the galls look like typical bladdergalls and are called "walnut bladdergalls" in some online references. However, as they mature, the galls become distinctively pouch-like and are referred to as "walnut pouch galls." Eventually, the galls break open like popcorn to reveal tufts of silvery-white hairs. 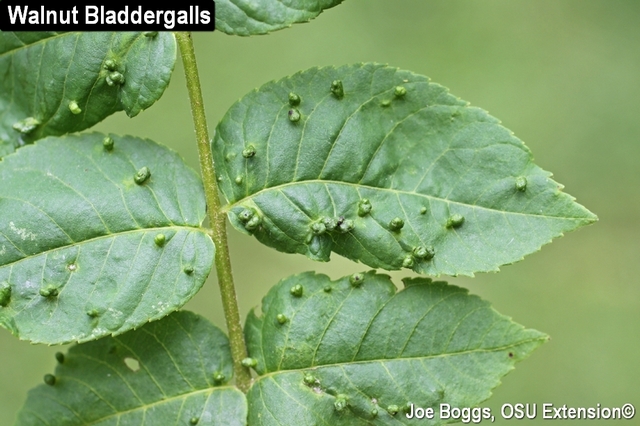 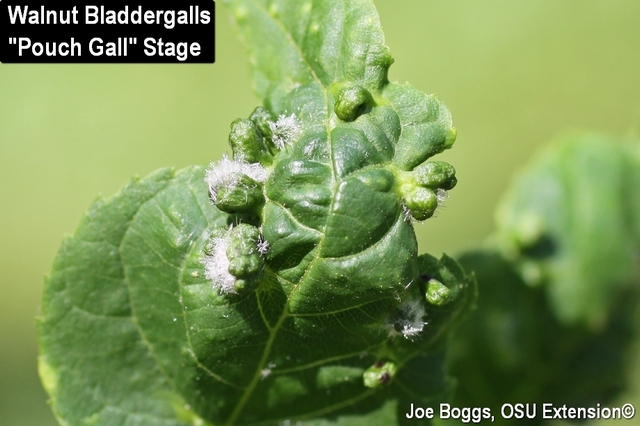 So-called walnut petiole galls are produced by the eriophyidAceria caulisare reaching their maximum size and becoming very evident on their namesake host. The galls are specific to black walnut (Juglans nigra) and may occur on the petiole, rachis, and petiolules of the compound leaf. 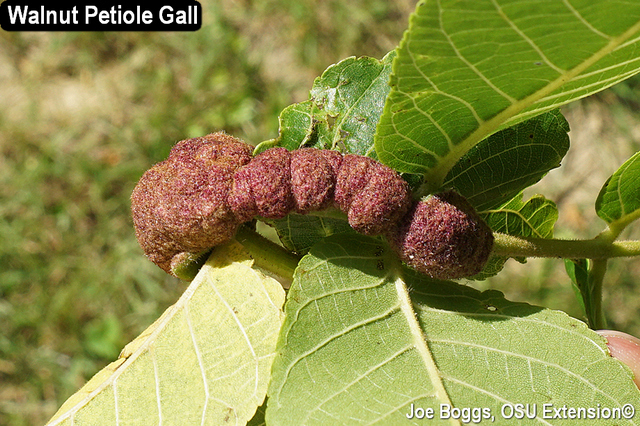 Although the galls may cause the compound leaves to become twisted and malformed, they do not disrupt the vascular flow. The affected food-producing leaflets remain functional even though they may be pointed in an array of directions. Thus, the eriophyid galls do not appear to cause significant harm to the overall health of their walnut hosts. 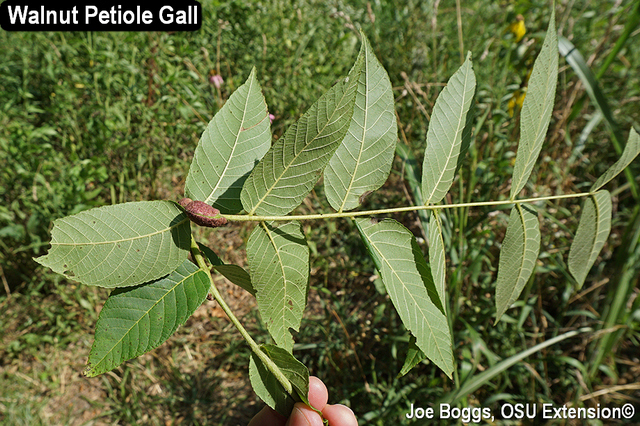 The fuzzy, cauliflower-like galls produced by the eriophyidAceria cephalanthion common buttonbush (Cephalanthus occidentalis) has gained more notoriety in recent years owing to the popularity of buttonbush in pollinator gardens. They certainly stand out on the dark green foliage of their host plant. 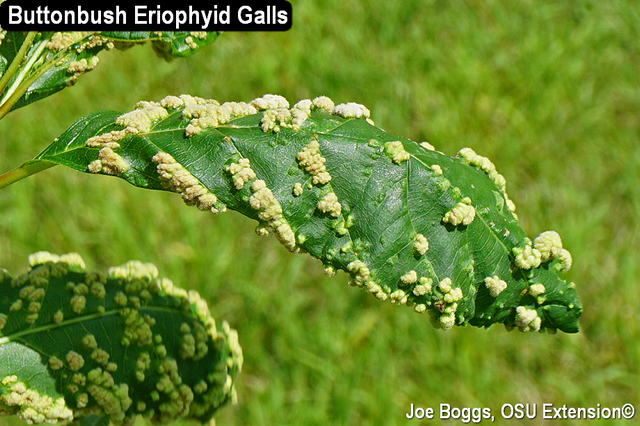 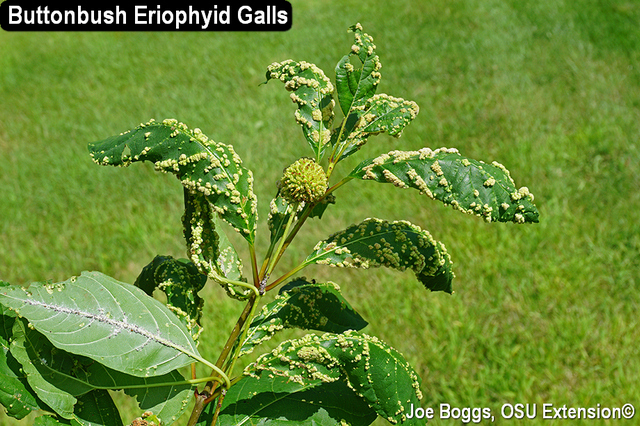 As with the vast majority of plant galls produced by arthropods (e.g. wasps, midges, etc.), those that are induced by eriophyids cause little to no harm to the overall health of their plant hosts. Populations tend to rise and fall dramatically from year-to-year. I often re-visit the same trees year after year and have found that while a tree may reward me with a huge gall display one year, it frequently disappoints the next. My photos below demonstrate this; the same tree, different years. 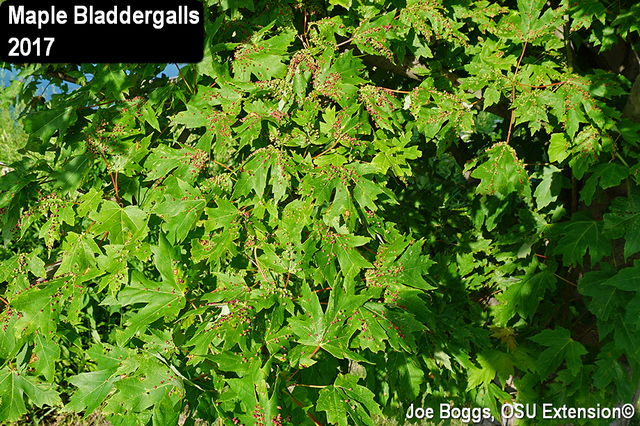 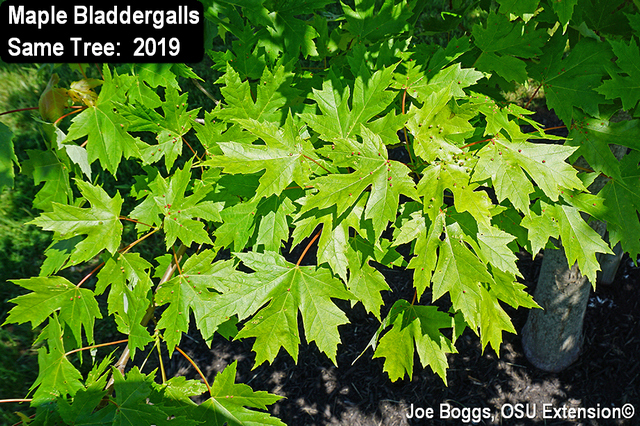