I received an e-mail message today from an arborist in southwest Ohio who included images that showed damage caused by White Pine Weevil (WPW) (Pissodes strobi).  Main shoots (terminal leaders) on white pine and Norway spruce were wilted and brown.  Some of the pine shoot tips were curved into "shepherd’s crooks;" the curling occurs when tender new shoots dehydrate while they are still pliable. 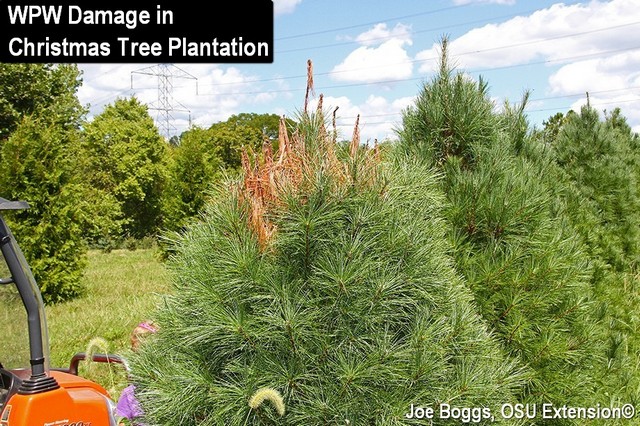 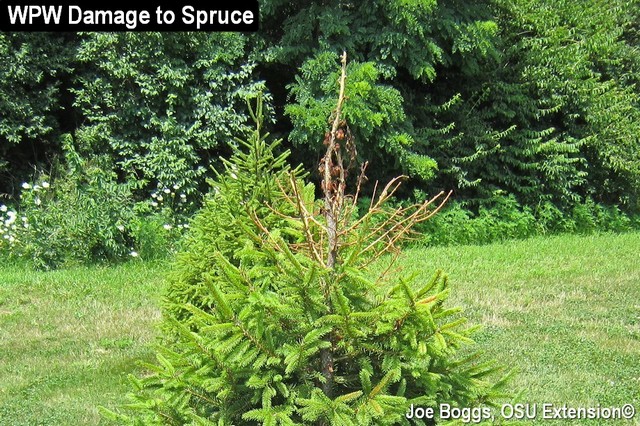 WPW larvae are only found in terminal leaders.  They tunnel through the phloem just beneath the bark to produce a paper-thin "bark veneer" over their feeding damage.  The papery bark was removed in one image to reveal the larvae were late instars and some had begun to construct tub-like "chip cocoons" in the xylem.  WPW pupates in these structures which means the clock is ticking to remove and destroy infested terminals before new adults emerge 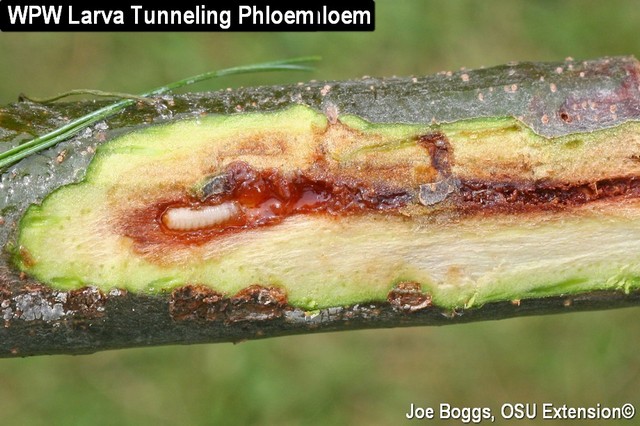 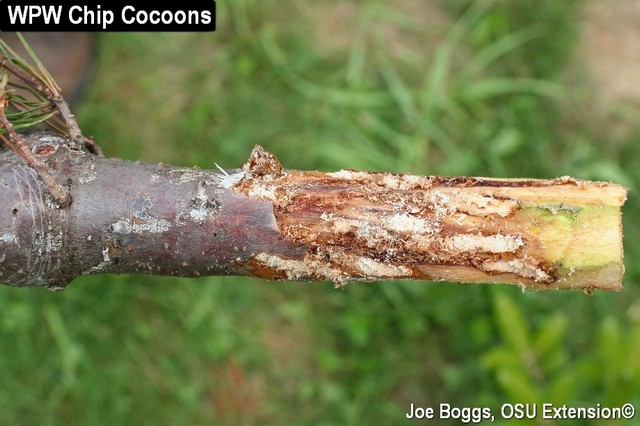 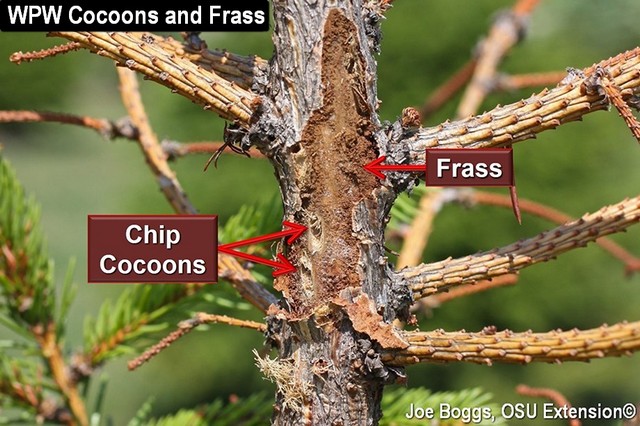 WPW has a strong preference for its namesake host.  However, it will also readily infest a wide range of conifers including Scotch, jack, red, and pitch pines as well as Douglas-fir and all spruces.  Indeed, the WPWs love of spruce is exemplified by its alternate common name of Engelmann Spruce Weevil.

WPW spends the winter as adults in the duff beneath conifers.  As spring temperatures rise, the adults ascend the trees to the terminal leaders where they feed and mate.  The weevils chew a small hole through the bark and then insert their mouthparts that are located at the end of their snout to feed on the phloem beneath.

The feeding holes are also used by the females to insert eggs into the phloem.  The resulting grub-like larvae are white, legless, and slightly curved.  They tunnel downward feeding on the phloem tissue which kills the main shoots.

WPS is capable of killing small trees less than 3' in height, but it does not kill large trees.  However, years of successive WPW damage to terminal leaders will eventually create "cabbage trees" which are short, squat trees with multiple terminal leaders.  Of course, loss of the leaders presents a serious production problem in nurseries and Christmas tree plantations. 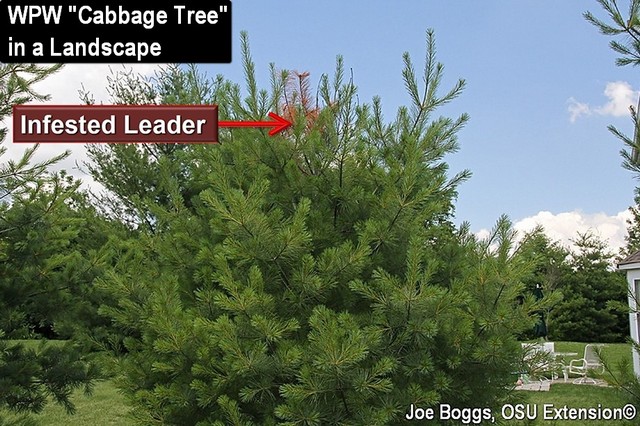 WPW has one generation per season.  So, removing and destroying infested terminals NOW will reduce localize populations.  This starts with closely inspecting conifer terminals that have died this season for evidence of WPW.  Other problems can also cause terminals to die.

If you find larvae feeding in the phloem or chip cocoons occupied by mature larvae or pupae, the infested leader should be immediatelypruned and destroyed.  It's important to destroy the infested terminals because larva and pupae can complete their development in pruned terminals left on the ground; new adults will still emerge.

Remember that you must isolate all of the larvae and pupae within the pruned terminal.  However, there is no "general rule" to predict just how for the larvae will tunnel downward during their development.  It's best to start pruning just below the upper-most whorl of lateral branches and closely inspect the cut ends as you make successive cuts downward on the main leader. 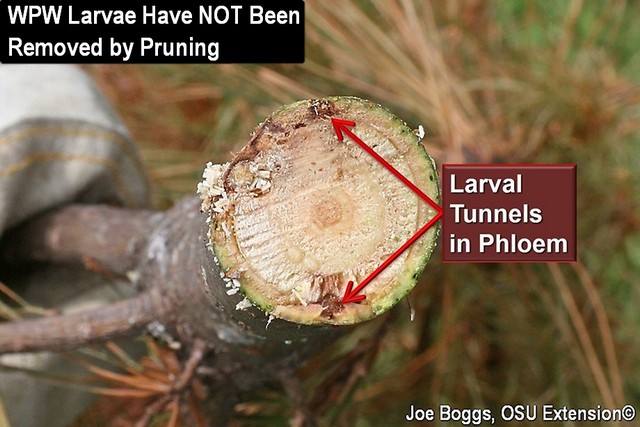 Larval tunnels appear as round to oblong holes in the phloem ring that are filled with reddish-brown frass.  If the cut end of the pruned leader is clear of holes, it means the immature weevils have been isolated.  If holes are evident, you will need to make another cut further down.  Don't be surprised if you need to make several cuts to remove all of the immatures in the leader. 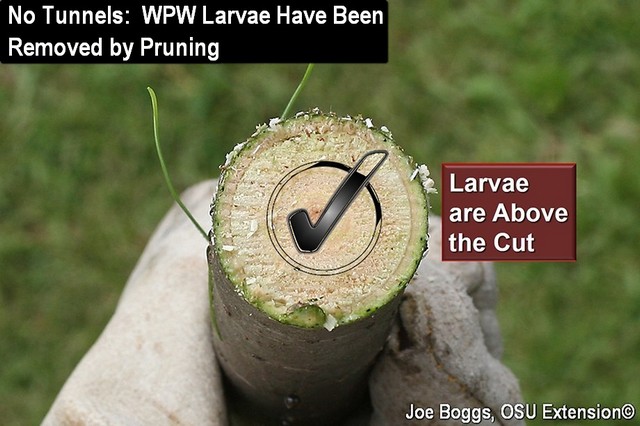 Selective pruning is very effective in eliminating a localized infestation.  However, if necessary, conifers can be further protected next season by making preventative insecticide applications.

Research has shown that a fall soil drench or soil injection of the systemic insecticide, imidacloprid (e.g. Merit, Xytect, etc.), will protect against WPW in the spring.  The fall application allows enough time for the insecticide to translocate to the tops of trees to kill weevils as they feed on the phloem in the spring, or to kill any early instar larvae as they begin tunneling in the phloem but before they produce serious damage.

Conifers may also be protected against WPW by spraying the tops of trees in early spring with a topical insecticide to kill females before they insert eggs into the terminal leaders.  Timing is critical.  The application must be made after overwintered adults start to emerge, which is usually around 84 GDD, but before females lay eggs.   Only main leaders are targeted; the entire tree does not need to be sprayed.  Effective products include pyrethroid insecticide such as bifenthrin (e.g. Onyx, Talstar, etc.).

Of course, as with using any pesticide, you must read and follow all label directions.  This includes making certain both the site (e.g. landscape, nursery, Christmas tree plantation, etc.) as well as the target plant (e.g. conifers) are on the label.  For example, products labeled for use in landscapes may not be labeled for use in nurseries or Christmas tree plantations, and vice versa.